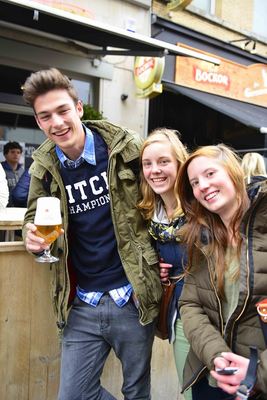 It’s hardly surprising that beer brewed in Belgium is incredibly popular nowadays. Belgium equals beer and beer equals Belgium. We might be blowing the Belgian trumpet a little here but, nevertheless, we are not far from the truth to be honest.

Without a doubt, beer is the national drink; we are so familiar with it that we don’t usually take a moment to stop and consider what it means to us.

It may surprise you but in Belgium, you can conjure up a can of beer out of a vending machine, find a huge choice of brands on the average supermarket shelf or visit a dedicated beer store for an even wider choice of specialty beers.

There is something for everyone, from the average beer lover who just wants a pleasing drink in the evening to the beer ‘anorak’.

At the end of each day, there is always ‘de kroeg’ or 'café' to visit. These small cafes originated as ‘living rooms’ away from home.

Most people lacked space in their houses and the 'café' was an excellent place to relax and enjoy a beer. Canny café owners ran a shop in parallel. They kept a close watch on their regulars’ wallets as they drank so that there would be enough cash left for the wife to do her weekly shopping in the store. 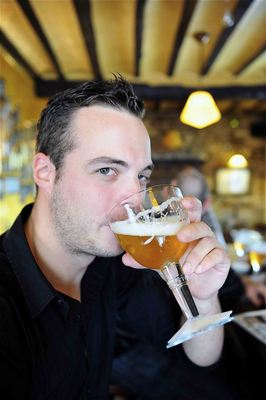 Admittedly, these days we Belgians gulp down a lot less than we used to. Both the smoking ban and more stringent drink-driving laws have reduced the number Of café visitors. The main victim of this trend is pils, which accounts for three-quarters of overall beer consumption.

Pils consumption has been falling for years, from 120 litres per-head per-annum to around 80 litres today. However, from trappists to tripels the consumption of speciality beers is steadily growing...

These days we more often enjoy a beer at home and that’s when we also tend to opt for savouring a specialty beer. The total production of Belgian brewers is near to 2 billion litres of beer. This doesn’t make the country the world’s or even Europe’s largest producer though; Germany, the Netherlands, Poland, Spain and the UK all produce more.

However, Belgium is the champion when it comes to exports. Sixty percent of all beer in Belgium – well over 1 billion litres – is shipped abroad. Who is buying all this Belgian beer? Amongst our biggest fans are: France, the Netherlands, Germany, the USA, the UK, Italy, Canada and Japan. The beer sector also wields a strong economic power.

Not only do the more than 150 Belgian breweries invest heavily in production equipment (brewing halls, fermentation and storage tanks, logistics…), they also employ around 4,500 people, not including those indirectly employed by the sector. 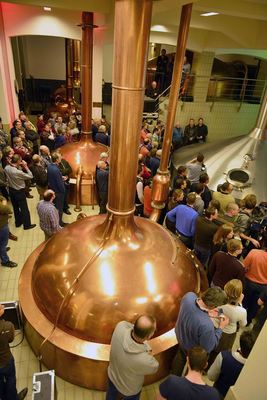 If you were to say, ‘we decided this between pot and pint’ (‘tussen pot en pint’), anyone who had spent any time in Belgium would know that you were announcing a decision that has casually been made at the bar of a café. In Belgium we like to reach our compromises at the bar where it is easy to make friends. But things weren’t always so peaceful.

Brewing and politics used to be tightly interwoven, especially in small towns, most of which once supported their own local brewery.

Brewers often also held the post of mayor so treating an entire café to a round would produce many votes and in many villages the brewer was also the main employer giving them a good deal of power.

The battle for political power nationally resulted in many villages with two brewers: one Catholic, one anti-Catholic. Until the 1960s the domestic market was large enough for Belgian brewers.

They supplied the cafés ‘in the shadow of the church tower’ and, if they wanted to grow their business, they would expand the number of cafés they owned and supplied by purchasing properties or signing up café owners. Bitter rivalries amongst brewers competing for the same local clients were not uncommon. If a large brewer took over a smaller one, he usually closed down the brewery and added the cafés owned by his former competitor to his own empire. In this way it was quite easy to end up owning dozens or even hundreds of cafés.

Nowadays you still see Belgian breweries owning large numbers of cafés and signing exclusive contracts with independent café owners. However, some cafés are not tied to any particular brewery, and the owners of these so-called free houses make their own decisions about the beers they sell .

Times have changed but your local, or ‘stamcafé’, is still where you arrange to meet your friends, where you re-invent the world at the bar, where you don’t have to do anything but will find plenty to do if you want to and where the owner rarely locks the door until the last customer has ordered a last pint, often in the early hours.

You will find cafés such as these in every city, town or village. Everyone is welcome and it won’t be long before you’re joining in the conversation at the bar and putting the world to rights over a good glass of beer. 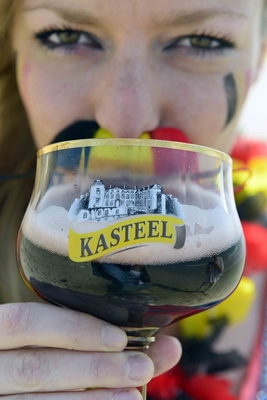 Sports and beer: not always the happiest of combinations. In Belgium though, football and beer have been going hand in hand for many years now. The largest brand of Belgian pils is the sponsor of both the national football team, and the national league competition. “Men know why,” their slogan states.

A football stadium without posters from beer sponsors is unthinkable. Pre- and post-match, the sometimes overpowering emotions of the spectators are flushed away with a few gulps of the golden barley juice. In some stadiums barrels are emptied so quickly that they have taken to pouring the beer straight out of the tank. Football drinking revolves around pils bought in generous rounds.

A rivalry between two brands of gueuze once played itself out on the football pitch. One of the country’s top footballing rivalries is between Anderlecht, the club from Brussels-Capital Region, and Club Brugge from West Flanders. They were involved in a veritable ‘gueuze war’ between their shirt sponsors when the West Flanders Van Honsebrouck brewery introduced its Saint-Louis gueuze to prove that that style of beer could be made just as well outside of the Valley of the Zenne and thus, that a high-ranking Brussels team could be taken on.

Anderlecht were supported by the Vanden Stock family and their Belle-Vue beers, Constant Vanden Stock even had the stadium named after him. Rivalries flared up but things calmed down in the bar.

Thank you for The Music! 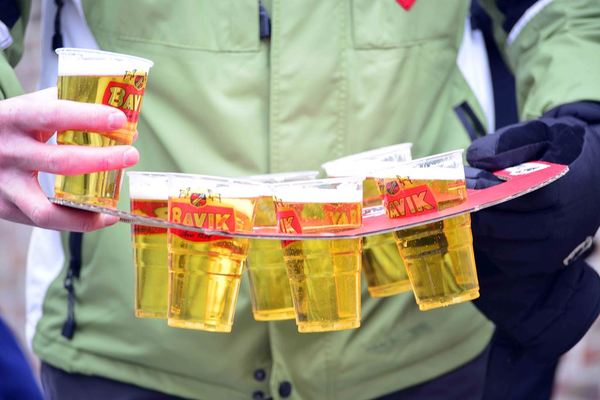 Last but not least, beer makes an impact on cultural life. Many music festivals, both large and small, are sponsored by beer brands: Rock Werchter, Pukkelpop or Tomorrowland to name but a few. And we don’t like to deny anyone the taste of a good glass of beer, so responsible drinking is legal in Belgium from the age of 16. Belgians are used to starting their 'beer education' far younger.

Many Belgians were brought up on table beer with a low alcohol content of around 2%, laying the foundations of our lifelong taste for beer.

Pils brands tend to have a presence at all the mega events and specialty beers are more likely to pop up at a jazz festival, a concert in the grounds of a castle, a book fair or a more modest musical performance. There is even an abbey beer that is the subject of a whodunit in which the characters go in search of the original recipe. And this is how Belgian beer has turned into the stuff of legend.

'Belgische Brouwers'/'Brasseurs Belges' - or 'Belgian Brewers' in English - is the new name of th...
Read More
GET LATEST BEER NEWS