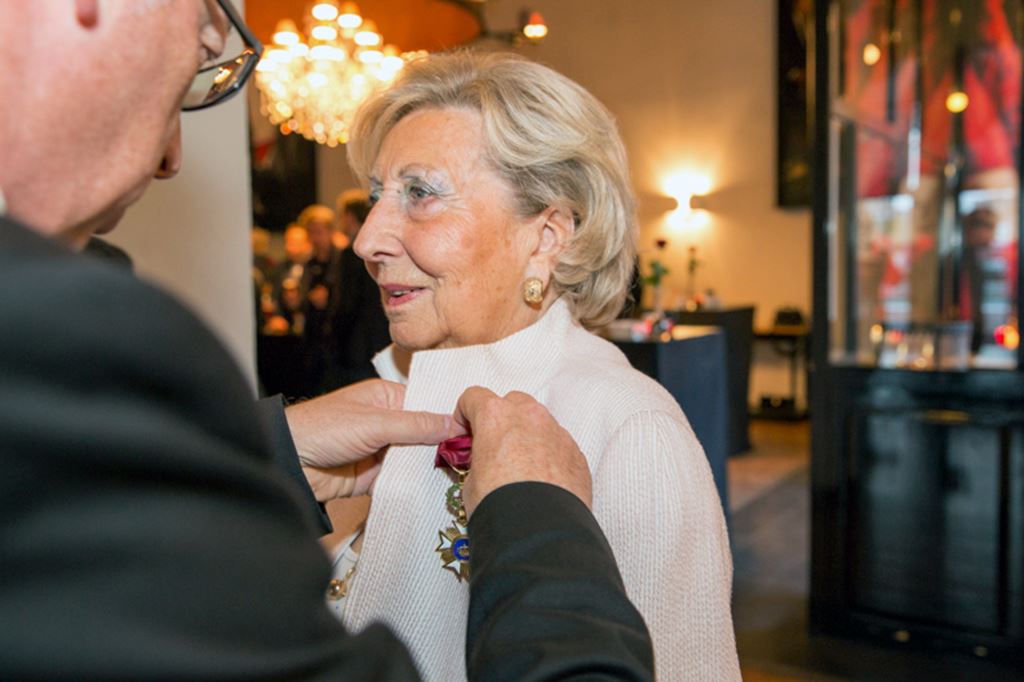 The idea that beer was ever only made by and for men can safely be consigned to the land of fairy tales. History teaches us that brewing was originally women’s work and it has had strong feminine links throughout the ages.

Brewing was in fact considered part of housekeeping, on a par with bread baking. There have even been witch trials in which the female brewer was accused of using herbs that inflamed the spirits too much.

As to the science of brewing, women were on a par with men. Consider the German abbess Hildegard von Bingen.

As early as the 12th century she wrote about the qualities of hops and was instrumental in making this vital beer ingredient better known. In modern times you will still find women playing an important role in the brewing hall.

Rosa Merckx is legendary in the Belgian brewing world. Her signature still adorns the silk wrappers enveloping bottles of Liefmans Goudenband and Cuvée Brut. Rosa was in charge of brewing at the company in Oudenaarde for 40 years, and was largely responsible for the current sweet-and-sour taste of Goudenband. 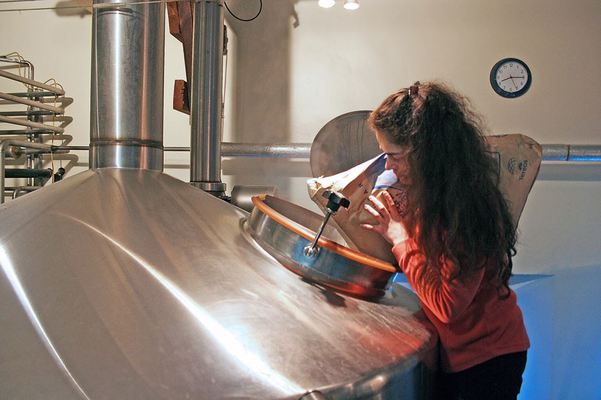 Rosa Merckx started off her career as a secretary and went on to become a Belgian Beer Icon. It soon became apparent that she had a particular talent for beer tasting, and that was her way into the brewing trade. When she came to the conclusion that the taste of Liefmans beers was becoming too sharp, she adjusted the recipe.

Rosa looks back on those early days with justified pride. “Beer is a live product. It has a soul. I would not have been able to continue working for such a long time with a soulless product or in an admin office,” she says.

“As a brewer, you derive satisfaction from your work. You are proud of what you produce and you liven up people’s lives."

"It is partly due to me that Liefmans has evolved from making extremely sour beers - ‘zerp’ as it is known locally – towards milder, only slightly sour beers."

"This does not mean that we added sweetening agents; rather, we improved our product hygiene so we could get a grip on the local fermentation process that turned the beer sour, and sometimes too sour.”

At the De Ryck brewery in Herzele the mashing stick is wielded by An De Ryck, busily keeping up the family tradition. The Spéciale De Ryck amber beer and the Arend beers are abundant evidence of her capabilities.

Brouwerij Dilewyns may have been started by Vincent Dilewyns but it is his daughter, Anne-Cathérine, who is in charge of brewing. Her sister, Claire, is responsible for sales and marketing.

Anne-Cathérine has chosen to produce unfiltered, unpasteurised beers with a clean taste, which may or may not fit into existing Belgian beer styles.

It doesn't stop at Dilewyns, no, the list with Belgian 'lady brewers' goes on and on. The main brewer of the Val-Dieu abbey beers for instance is Virgine Harzé and at brewery '’t Gaverhopke' Gudrun Vandoorne has been brewing for quite a while. 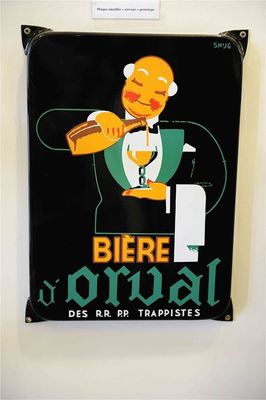 For almost 30 years, the Orval abbey brewery was managed by Jean-Marie Rock. These days, his former right hand, Anne-Françoise Pypaert, makes sure that the soul of this iconic brewery lives on. Fans of Orval are unlikely to notice the change.

They are so familiar with the tastes of the young and old (those aged for at least six months) beers that no brewer on earth would dare to put his or her own imprint on this well-loved taste.

Brewing at the Orval abbey means honouring tradition while taking advantage of the latest brewing technology.

Science increasingly lends a helping hand, especially when it comes to managing the wild yeasts that are added prior to bottling and will continue to work in the bottle until all the residual sugars have been converted into alcohol.

The Brasserie de l’Abbaye des Rocs, known for its eponymous malt beer as well as its Montagnarde amber beer, is managed by Nathalie Eloir. This is another brewery whose primary aim is to achieve a clean and pure taste. Their brews are made only with well water, yeast, pure malt, hop cones and natural herbs. No sugar is added. 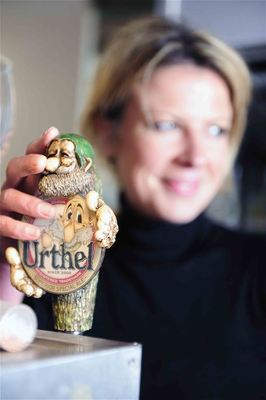 Research has shown that, in general, women have a better sense of taste than men. They are able to distinguish between a higher number of aromas and flavours. Brewer Hildegard van Ostaden is a prime example. She was responsible for launching the Urthel beers, now owned by the La Trappe brewery.

These days, Hildegard brews exclusively for her own beer restaurant, De Hoppeschuur in Knesselare, where she can also be found at the stove. She produces ‘rebellious commercial beers that don’t fit a particular beer style,’ with plenty of passion thrown into the mix.

There is a summer beer, a Belgian IPA... but no classic doubles or triples. She is keen on hops, loving the zesty European varieties, and aims to make beers that are overflowing with taste.

Hildegard won’t shy away from an experiment or two. She’ll offer you a light thirst-quencher, but there’s also a barley wine on offer, or a wood-matured degustation beer.

Hildegard developed a taste for beer when she was offered a light table beer (about 2% ABV) by her ‘Oma’, or Granny. Over time she familiarised herself with the various beer styles. This interest became academic study in an area that proved fertile ground for her passion for science and chemistry.

Hildegard is now a qualified brewing engineer with a lot of research under her belt: she’s an expert on hops and has conducted investigations into the effect of aging on beer quality. 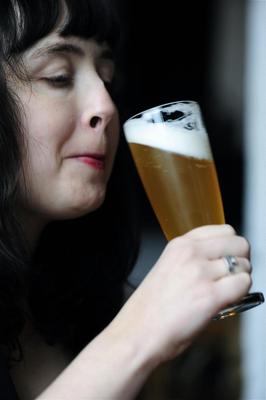 Beer sommelier, published author and hobby brewer, Sofie Vanrafelghem, is passionate about women and beer. She has been researching the topic for years, and teaches and lectures in Belgium and abroad, having founded the 'Women and Beer' movement.

Sofie is utterly convinced that women are just as keen on beer as men. “If women state that they don’t like beer, this is only because they have a very narrow image of beer,” she says. “My challenge is to give them a taste of our rich beer culture.”

But beer remains a male drink in the popular perception. Its macho image, primarily reinforced by pils beer advertising, can put women off. When they are finally won over, it is the pure taste of beer that they love.

Women don’t always go for sweet flavours, Sofie says, but style is important. Present the beer in an elegant wine glass and you will increase your appeal to the female consumer.

Having a beer with a restaurant meal also opens up the possibilities for female drinkers. But the beer must be treated with the honour it deserves, be served correctly, and come with the sort of extra information that usually comes on a wine list. Beer really is a brilliant partner to a huge variety of dishes, making a particularly excellent companion for cheese.

In the Gruut city brewery in Ghent the worlds of brewing and dining are merging. Brewer, Annick Desplenter, sets herself apart by brewing herb beers, based on recipes she has researched that date back to the early Middle Ages, a time before hops.

In those days a herbal mixture called ‘gruut’ gave flavour – and perhaps medicinal qualities - to the beers.

These days, gruut beers don’t have the extreme bitterness of their historical counterparts, and so they appeal to a large section of the female public. Folklore has it that herbs heighten the libido whereas hops lower desire, which is a great side-effect for either gender!

Annick stresses the importance of using the senses when experiencing beer. She believes that far too many people limit themselves when it comes to developing their sense of taste. She feels that people need to study beer tasting, learning to notice particular aromas and filter out the so-called off-flavours.