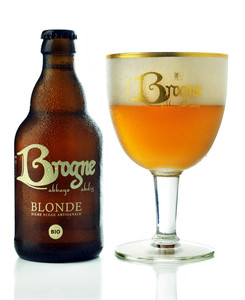 The history of Brogne Abbey goes back over 1,000. Brewing on this site was first documented in 986. In common with many abbeys, Brogne has suffered its share of pillaging and violence as wars disturbed its peace. The original Brogne beer recipes have actually been lost forever.

1982 saw the launch of Abbaye de Brogne by Brasserie Desfosses. Later, the beer was taken over by Affligem and Lefèbvre.

Since 2014 Abbaye de Brogne has once again been brewed within the abbey walls in a brand new microbrewery managed by brewer Bruno Deghorain, known for his Brasserie La Binchoise.

This blonde beer is relatively light and quite dry in comparison with many other abbey beers. Abbaye de Brogne Blonde is a 100% organic, unfiltered top-fermented beer that re-ferments in the bottle.

It is brewed with the ‘health-giving’, calcium-rich water of a well that was believed to have performed miracles.

The brewer strives to produce a beer full of character, with a balance in the glass between the fruitiness of the yeast and the bitterness coming from the hops and malt.

The beer has striking touches of cloves and vanilla contributed by the yeast. There is also an Abbaye de Brogne Brune as well as a heavier barrel-aged amber beer.

Abbaye de Brogne Blonde is an organic, top-fermented beer that re-ferments in the bottle.

This is an unfiltered, coppery-blonde beer with a delicate pearlisation and a slightly cloudy body under a head of uneven, mountain-peaked froth.

Abbaye de Brogne is poured into a classic chalice typical of abbey beers. Take a good look at the playful inscription in gold lettering, written with a ‘dancing’ typeface.

Abbaye de Brogne Blonde is a rather dry abbey beer with aromas of cloves and vanilla.

It is thirst-quenching but with enough complexity to satisfy, with a lovely balance between fruitiness, hop bitterness and malt.

Abbaye de Brogne Blonde suits a range of dishes, either as an accompaniment or as an ingredient.

The abbey’s own restaurants use the beer in and with bread, cheese, and dishes with mussels and meatballs.

Stores in the bottle for up to 24 months. On tap the beer will keep for between six to nine months. Due to it's specific characteristics this isn't a beer to be stored for long periods.

Available in 33cl and 75cl bottles and on tap (20l). This beer has just recently come on the market and is making is way around Belgium as we speak.

As this isn't the first beer and brewery to be launched by Bruno Deghorain you may well be able to pick it up at specialised beer shops throughout Belgium.