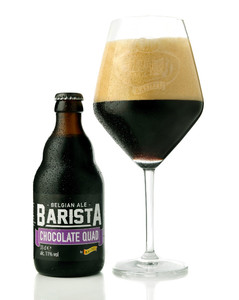 Kasteel Barista Chocolate Quad is the successor to Kasteel Winter, a seasonal beer that has been discontinued. Barista is a dark degustation beer that can be enjoyed all year long - on an outdoor terrace or in front of an open fire. It is also an ideal way to end your meal.

The use of several roast malts lends this beer its pronounced roasted character, with aromas and flavours of coffee and chocolate.

The Barista name comes from the coffee world, and it’s beautifully reflected in the beer’s dark colour and a delicate, cream-coloured layer of froth.

The ranks of Kasteel Donker, Kasteel Blond, Kasteel Tripel, Kasteel Hoppy, Kasteel Rouge and Cuvée du Château are enriched by the Kasteel Barista with its flavours and aromas from hot beverages and chocolate.

The warming alcohol takes this beer one step closer to the black gold.

The beer derives its dark-brown colour from the roast malt. It has slight pearlisation below a cream-coloured layer of froth.

Barista is a unique beer within the Kasteel range and as such has an impressive glass to compliment it. As with the other Van Honsebrouck gastronomic beers (Trignac and Cuvée du Chateau), Barista is served in an elegant high-stemmed degustation glass.

Kasteel Barista stands out with its fruity aromas and touches of roast malt, caramel, coffee and chocolate.

In the finish you will encounter surprising bitter-sweet impressions of marzipan and warmed alcohol.

This degustation beer finishes off a meal beautifully. It is also delicious paired with meat recipes, game, and classic dishes like beef casserole.

Thanks to its aromas and flavours of coffee, chocolate and cacao Kasteel Barista makes a great combination with desserts that include chocolate.

Kasteel Barista will keep for 60 months in the bottle and for 15 months on tap. The brewer recommends storing this beer vertically in a cool and dark environment.

Barista is available in bottles (33cl) and on tap (20l kegs). Thanks to the popularity of their beers, brewery Van Honsebrouck exports very successfully and is present in many countries around the world.

So, although this is a new addition to their beer range you should have no trouble in finding and drinking Barista beer, either in Belgium or abroad.

Kasteel Rouge
Kasteel Rouge uses Kasteel Donker as a motherbeer. The beer was launched in 2008 and is the “fruitiest” offering within the Kasteel beer range. As it is produced in a different way from the typical Belgian fruit beers, brewer Xav ...
Facebook
Twitter
Google
Email
Pinterest
GET LATEST BEER NEWS