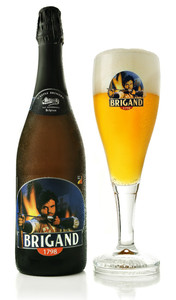 Brigand, the name of this golden blond regional beer, is a reference to the revolt by the peasants of Ingelmunster against the ‘sans culottes’ (French soldiers), which took place in 1798 in nearby Hulste. Brigand is the name given by the French to the Flemish rebels. In French, brigand just means bandit.

Although Castle Brewery Van Honsebrouck is known for its sweeter beers, such as Kasteel and the fruit beers St. Louis and Bacchus, the Brigand is the definite exception to this unwritten rule.

Brigand was introduced in the early 1980's as a response to Duvel, produced by the brewery of the same name, which is owned by the Moortgat family. At the time this beer was served in corked 75cl bottles. Brigand, a rebellion beer with a long finish.

The beer used to be mainly amber coloured but this changed slightly when a different malt was chosen.

Top-fermentation, refermented in the bottle.

Clear and golden blond beer. Outstanding and very fine CO2 pearlisation that provides a frothy head which clings to the glass.

Brigand is served and tasted in a graceful, elegant and tall tulip-shaped glass that features the “Brigand” archer.

Brigand is a strong and powerful beer with a somewhat neutral, very lightly malted smell. A taste of alcohol sweetness, slightly malty/herbal/hoppy, touches of citrus zest with a very slight bitterness that becomes stronger in the finish.

Brigand makes an excellent taste pairing with a wide range of (Belgian) cheeses. What’s more, there is a Belgian cheese linked to this beer: Brigand cheese.

This is a semi-hard but zesty cheese produced in the Westhoek. Brigand ripens for six months before coming onto the market. An ideal cheese for making “raclette”.

The label indicates a best before date of two years. We agree: it is best to consume, taste and enjoy this beer within the time stated.

This is not a beer that was brewed for storing in a cellar.

Particularly in Belgium this is quite a current beer, relatively easy to obtain in general cafés as well as the more beer-oriented ones.

You will have few problems finding Brigand in supermarkets, off-licences and some of the more discerning (online) beer shops.

As Castle Brewery Van Honsebrouck is exporting world-wide and is present in the Anglo-Saxon market, you can find this beer outside of Belgium.