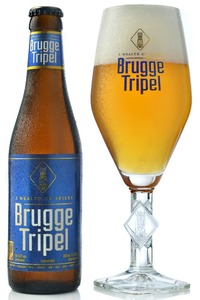 Many Belgian towns and cities have their own city beer. Bruges is no exception, with the Brugse Tripel from the De Gouden Boom brewery. Brouwerij Palm took over De Gouden Boom in 2004 and has been producing this brew ever since under the name of Brugge Tripel.

However, the roots of this city beer go back far deeper, in fact all the way to the Middle Ages.

This was before the hop plant came to these shores and when brewers were using a herbal flavouring mixture called gruut. The Gruuthuus in Bruges is a reminder of the days when the lords of the Gruuthuus collected excise duties levied on the brewers’ gruut on behalf of the Count of Flanders.

The Brugge Tripel retains a herbal aroma, a mark of this history. Tripel means that more raw materials than usual have been used. Tripels are, usually blonde in colour, with a strong flavour of malt and/or hop bitters.

A top-fermented beer with re-fermentation in the bottle.

The Brugge Tripel is brewed with pure spring water, the Kent Golding hop variety and pale malt prepared using the brewery’s own recipe.

It is a lovely golden-blonde colour with touches of amber. The delicate but compact head of froth sticks to the glass like a veil of lace from Bruges.

The Brugge Tripel is served in its own elegantly-tall, branded glass that fits your hand perfectly. It is narrow at the top to retain the beer’s aromas.

The Brugge Tripel will surprise you with its aromas of malt, banana, cuberdon (a typical Belgian sweet, traditionally raspberry flavoured), caramel and chocolate in combination with roast and smoked notes contributed by the yeast.

This tripel has a powerful, bitter-sweet taste. It is full in the mouth with a long, slightly bitter finish.

As to cheese, we recommend: the zesty unpasteurised Li Petit Rossé from Belgium, a Gouda from the Netherlands or a "Campoestrella', a mature sheep’s cheese from Spain with a nutty flavour.

The Brugge Tripel will keep for 24 months in the bottle and for 9 months in the barrel. It is best stored upright in a cool, dry and dark environment.

In common with all tripels, this beer won't improve with longer storage.

Available in 33cl bottles and in 20l barrels. This beer is quite widely distributed and easy to get hold of, particularly in the medieval city of Bruges.

Palm
The Palm Brewery was founded in 1929. Their amber beer is a ‘Spéciale Belge Ale’. This beer style was created early in the 20th century by Belgian brewers, to provide an alternative to the increasingly popular pils. This top-ferme ...

Cornet
Microbrewery De Hoorn was re-established in 2014. With the launch of its Cornet, Brouwerij Palm is harking back to the tradition of oaked beers, where oak is used to create the taste. The four ‘Ingredients Masters’ employed by th ...