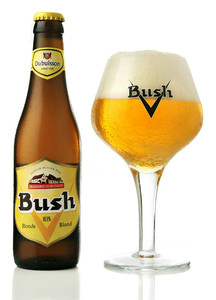 Following on from the amber ale of Bush Ambrée, and the darker seasonal brew of the Bush de Noël, the Bush Blonde (Scaldis) formed a natural complement, when first introduced to the Bush range back in 1998. That year was the 65th anniversary of Dubuisson's mainstay, Bush Ambrée, and this muscular brew was aimed squarely at lovers of a strong blonde.

While this filtered, high-fermentation beer doesn't have quite the alcohol kick of the Ambrée, at 10.5% ABV, it remains a powerful beer. As is the case with most of the Bush range, the basic building blocks for the Blonde are the same – particularly in the use of the distinctive Dubuisson house-yeast.

What has been tweaked is its malt-balance (lighter), and its use of specific hops. The Saaz hops used here help to keep the bitters gently to the background. The result is a pils in looks – bright blonde with a frothy head – but which tastes so much fuller. A lengthy fermentation builds this blonde to a heady 10.5% ABV, made emminently drinkable by its well-saturated taste profile.

The blonde Bush is a filtered, high fermentation beer.

The Bush Blonde owes its bright blonde colour to the use of traditional malt varieties, helped along by the Saaz hops that are used in the production of this beer.

The Bush Blonde comes across as a perfect marriage of subtle tastes – soft-yet-dry, bitter-but-sweet – with the characteristic Bush yeast imprint, and a suite of well-balanced aromas.

Bush Blonde is perfectly suited to culinary use. Thanks to its low bitterness, the beer is the ideal, and subtle, complement to cooking juices or stock. Also good in sauces or to make a fish or meat marinade.

Bush Blonde makes for a delicious pairing with egg dishes, speciality vegetables, crustaceans, shellfish, fish accompanied by a sauce, chicken dishes, pizza and pasta with pesto. Also great with creamy, as well as hard, cheeses and in a cheese fondue instead of white wine.

Bush de Noël
The first reach-out beyond Bush Ambrée for Dubuisson, making its appearance in 1991, the Bush de Noël (Scaldis Noël) is a warm Christmas beer intended to liven up the dark days of winter. Although this beer isn't easy to find, pr ...