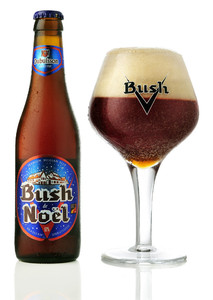 The first reach-out beyond Bush Ambrée for Dubuisson, making its appearance in 1991, the Bush de Noël (Scaldis Noël) is a warm Christmas beer intended to liven up the dark days of winter. Although this beer isn't easy to find, produced in only limited volumes, the Bush de Noël is considered by many as an international benchmark for Christmas beers.

Such 'holiday' beers tend to be malty, top-fermented beers with a substantial seasonal generosity, gifting the supper with their high alcohol content. Christmas beers are often dark or amber-coloured, and typically have herbs added to the brew.

However, the Bush de Noël keeps things a little simpler, leaving out any additional herbs. Instead it has a rich complex of malt, hops, candi-sugar and yeast – enough to balance out its weighty 12.0% ABV tag. During the production of this beer, the brewer will typically add hop bells (as part of its maturation), so as to make sure that the hops have their say.

The name of this beer is somewhat cleverer than it first seems, making for an amusing pun in French. That's because ‘Bûche de Noël’ is the name of the traditional Yule log, usually made of a thick butter cream enveloped in sponge cake. It's hugely popular during the Christmas period. And Bush de Noël certainly lives up to the rich, full flavour of its namesake.

The Bush de Noël is a 100% filtered, top-fermented beer.

Water tapped from beneath the brewery, candi-sugar, barley malt, hops and house yeast.

The Bush de Noël owes its copper-red colour to the use of roast caramel malts, its mistiness to the in-bottle ferment.

The Bush de Noël derives much of its rounded character from the use of roast caramel malts. The hops are carefully balanced with these, added in just the right proportions to develops its subtle hop aroma. There is also a robust fruity character, with the overall taste pleasingly consistent.

A strong Christmas beer like the Bush de Noël cries out for chocolate. If you want to try this pairing, your best choice is dark and slightly bitter chocolate, one with its own pronounced taste, and so able to stand up to richness of this beer. Also perfect in combination with desserts that make generous use of melted chocolate.

Bush de Noël is available in 33cl bottles and on tap (20 l barrels).

Bush de Charmes
Bush de Charmes is the latest addition to the range of gastronomic beers offered by Brasserie Dubuisson that already include the Bush de Nuits and the Bush Prestige. Hugues Dubuisson, in his never-ending quest for exceptional bee ...

Bush Ambrée
This is a venerable brew, which has recently marked its 80th anniversary. 1933 was the year that the Bush Ambrée (Scaldis Ambrée) was first introduced, under the name of Bush Beer. It is one of the oldest speciality beers in Belg ...
Facebook
Twitter
Google
Email
Pinterest
GET LATEST BEER NEWS