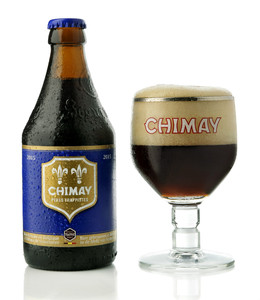 To celebrate Christmas 1948, the monks of Chimay decided to produce a Spéciale Noël. But from the time their new brewing hall opened (in 1954) you could say every day has been Christmas. That's when the Chimay Bleue (Blue), that self-same Spéciale became part of the Trappist brewery's standard range. And it is indeed a special brew, the strongest of the three Chimay Trappist beers available on the market.

It was in 1982 when we first saw this dark beauty restrained by a cork, rather than a cap – in a 75cl bottle carrying the Chimay ‘Grande Réserve’ label. A respectful format that many say is totally deserved. This beer belongs to the very select club of those that love to be aged – for five years or even longer. And if you manage to wait that long, your patience will be rewarded with profound aromas of aged port, thanks to a beautifully beneficial madeirisation process.

The blue Chimay has the full power and complexity of a genuine Trappist beer, and as such just begs a prime spot at the dining table. It's not exactly a secret that beer and cheese make an excellent pairing; this dark Chimay provides the proof. The abbey's monks have even introduced a Chimay à la Bleue cheese, recently. Its curds are soaked in the beer, and then the cheese’s crust is thoroughly rinsed in Chimay Bleue. Still not convinced? Try sipping a glass of Chimay Bleue with a Roquefort cheese melted on toast.

The Chimay Bleue has an intensely dark brown colour, with a clear, ruby-red glow, and is covered by a robust cream-coloured collar of froth.

In common with all the other Belgian Trappists, the Chimay Bleue is tasted best when it's in its own tulip-shaped glass. Chimay also provides a pottery mug which brings a measure of medieval charm.

Hints of coffee, cacao and dried dark fruits make an initial seductive appearance, to be followed by rich aromas of stone fruits such as apricot and nectarines. In the mouth, mocha and coffee are dominant. The finish is heart-warmingly alcoholic, but the Bleue retains its fresh and fruity character even after that tender full-in-the-mouth feel has melted away.

Delicious with slightly smoked eel in a honeyed-soy sauce. Or try it with a crunchy sesame biscuit, grilled pork ribs or steak accompanied, by a rich Roquefort cheese sauce. A good combination is also had with venison or 'foie gras'.

Rest assured, this vintage 'millésimé' is one that can be laid down for five years or more. Its wonderful fresh taste will most definitely improve with time, though its exact character will vary with the size of the bottle, and the way it is stored.

This ‘capsule bleue’ is available in bottles of 33cl and 75cl. However, you could also buy a Grande Réserve, which comes in the impressive size of 1.5L. A perfect bottle to lock away in the cellar and taste a few years on with good friends... very good friends.

This beer is readily available in Belgian cafés and even in supermarkets. Chimay is also an active player in the export market, which makes this beer fairly easy to find outside Belgium too.

Chimay Triple (White Cap)
It was in 1966 that Brother Théodore created the ‘capsule blanche’, now better known under the name of Chimay Triple. In contrast to the dark Chimay Rouge and Chimay Bleue, the ‘white Chimay’ presents a dry and hoppy character. Th ...

Chimay Dorée (Gold)
Father Théodore was responsible for the re-start of the Chimay brewery after the Second World War. He worked with Professor De Clerck of Louvain University. Together, they managed to isolate the Chimay yeast that is still in use a ...
Facebook
Twitter
Google
Email
Pinterest
GET LATEST BEER NEWS