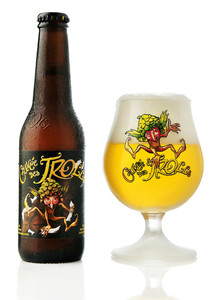 The Cuvée des Trolls first saw the light in 2000, fermenting in the tanks of microbrewery Le Brasse-Temps, a subsidiary of Dubuisson based in Louvain-La-Neuve. This outsider brew, initially aimed at the youth market, quickly achieved success for the brewery.

The Cuvée des Trolls makes for a great starter beer, treading the path between a heavy but quaffable beer and a light degustation beer. This blonde brew is unfiltered, and so naturally cloudy. It is full in the mouth, both fresh-tasting and mild, with plenty of fruity citrus and perfumed aromas. That's thanks to the addition of dried orange zest to this beer's ingredient list.

The Cuvée des Trolls is an unfiltered, top-fermented beer.

Slightly cloudy with a colour between blonde and amber. Firm collar.

Cuvée des Trolls is served in the characteristic Dubuisson glass with a matt satin finish. The striking logo features a tiny green-haired troll with a pointy-nose, leaping legs akimbo.

The addition of dried orange peel at the boiling stage brings a pleasantly fruity aroma to the fore. It harmonises quite beautifully with the well-rounded and delicate taste of this beer.