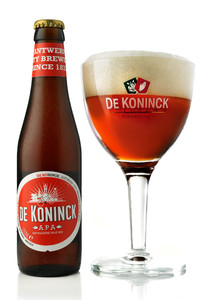 This Antwerp classic, launched over a century ago in 1913, catches your eye straight away. That's thanks to its intense mahogany colour and its robustly frothy collar. De Koninck has a complex aroma, with touches of toffee, chestnut and caramel.

It also comes with a smoky fragrance. Fruity notes, especially of banana, are in evidence here, as well as herbs hints – provided by the noble Czech hops used to brew this beer. All of this comes together to form a pleasantly mild taste, one that also manages a certain nuttiness on the palate.

This beer is quite bitter, just as a genuine Spéciale Belge should be. But it is never bitter in an aggressive way, and it comes with a full and creamy aftertaste. A properly poured glass will ensure a satisfyingly creamy collar of froth that persists. Right down to the last gulp there will be a creamy layer of froth in the glass.

Pouring a De Koninck is nothing less than an art form. Keep a close eye on the café owner behind the bar. He will pour your beer in two stages. At first, the froth will reach up to about one centimetre below the rim of the glass.

He will then let the beer rest for a few seconds before filling up the glass until there is a rounded collar topping off the glass. Don’t skim off the top whatever you do.

De Koninck is a high fermentation beer. Fermentation takes place at temperatures of between 25 and 27°C.

De Koninck beer has an amber colour and shows up clear in the glass. The frothy collar is full and creamy and should be two fingers thick, when freshly poured in the correct manner.

The bottle should not contain deposits of yeast.

Various types of serving glass do the rounds, but this beer ought to be served from its characteristic bulbous glass, also known as the 'bolleke’. And in fact, in its Antwerp home-town, a De Koninck is simply called a ‘bolleke’.

De Koninck is a mild beer that is very drinkable, but it may surprise you with its alcohol content. At first, you will get a taste of the malt, followed by herbs and then a fruity gingery blend, with the delicate Saaz hops in the finish.

This amber beer has a surprisingly zesty, dry and slightly bitter taste and its velvety aroma will be a pleasant revelation.

In terms of desserts, this beer is a good fit with dishes containing vanilla. It also complements tropical fruits, such as melon, and will go well with pies and crumbles using red summer fruits. Another recommendation is the 'Vanillien', a vanilla goats’ cheese from Normandy.

A 'bolleke' was part and parcel of daily life in Antwerp, so this was never a beer brewed to be stored; quite the contrary.

However, if you store it properly in a cool and dry place this beer will keep for one year in the bottle and for nine months in the barrel.

De Koninck is available in 25cl and 33cl bottles and on tap in barrels of 20 and 30 litres. The ‘bolleke’ is very easy to find in the Antwerp area just like the other De Koninck beers, the Triple d’Anvers for example.

The brewery is busily exporting its brews so you will be able to find them on your travels.