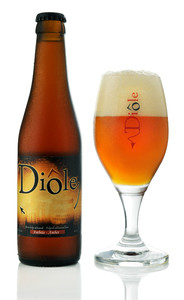 Amber beers are not as prevalent as they used to be. This type of top-fermented beer was the response of Belgian brewers to the foreign pils beers that flooded the market from the beginning of the 20th century.

A contest was staged to find a contender to these popular invaders, and so the spéciale belge was born. The style would remain popular for dozens of years, and its brewers would always include an amber beer in their range.

Nowadays, while established values in the beer business are still respected, this darker-coloured, relatively light thirst-quencher is harder to find, even among Belgian microbreweries.

The creation of this beer at Brasserie des Carrières could be described as a happy accident. The gas flame used to fire up the mashing kettle was burning just a bit too long, or the settings were too high... whatever, the beer came out with a different colour and taste.

The resulting brew went down very well and brewers Julien Slabbinck and François Amorison decided on the spot to market this beer, baptised Diôle Ambrée, alongside their Diôle Blonde. Diôle Brune was to join the family at a later stage.

This beer is an excellent example of the expertise of the brewer-malter, someone who has the art of dosing down to a tee. Timing is important too: the mashing basin must be heated up to the point where the malt caramelises slightly.

Diôle Ambrée is a top-fermented beer that re-ferments in the bottle.

Amber is the colour of Diôle Ambrée. It is an elegant beer, slightly sparkling underneath a solid head of froth that has plenty of staying power.

As with the majority of Belgian beers Diôle Ambrée is served in its own special glass. This one is an elegant high-stemmed glass adorned with the 'devil's tail'.

This amber beer is characterised by a fruity aroma with impressions of citrus, cinnamon and pepper and accompanied by floral touches, against a background of slightly roasted malt.

The aroma carries through to the taste. It is a thirst-quencher with surprising notes of mild, warm caramel. In the finish, the mouth warms up slightly, followed by a hint of bitterness. Time for another mouthful.

Diôle Ambrée is an excellent pairing with goat’s cheese, a Vanillien from Normandy for example. It is also delicious with a stew, braised beef for example, and of course with a Belgian Diôle cheese.

The brewers advise that this beer can be stored for up to two years in the bottle and for up to six months on tap.

Diôle Ambrée isn't brewed to be stored for years; always keep your bottles upright in a cool, dark and dry place.

Diôle Ambrée is available in 33cl and 75cl bottles and on tap (20l kegs). Brasserie des Carrières is a microbrewery so you won't readily find their beers on supermarket shelves.

You will be source Diôle via specialised beer shops, online beer shops and in specialised beer café's. Outside of Belgium it is possible to find some but you will have to look for it as the export activities of Brasserie des Carrières aren't that extensive - yet. You can also contact the brewery using the details provided for further supply or export information.

Diôle Brune
Many Belgian brewers who produce specialty beers will tend to offer two varieties that they swear by, a blonde beer and a dark or Christmas beer. The dark beer will have the fragrance and colour of roasted malt, with the occasiona ...

Diôle Blonde
The Diôle Blonde was the first beer introduced by Brasserie des Carrières. Its launch at the end of 2012 came after much fine-tuning and many a test brew in this microbrewery at the Malterie du Château in Beloeil, where brewer Jul ...
Facebook
Twitter
Google
Email
Pinterest
GET LATEST BEER NEWS