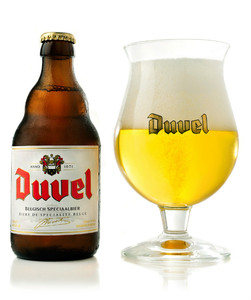 Brewed for the first time in the 1920s, Duvel has stamped its mark as a reference point amongst the stronger blonde Belgian beers.

The beer is quick to live up to its reputation visually, with its imposing snow-white head and pearlisation in the glass, making it quite beautiful to look at. It wasn't always a blonde beauty, though, as Duvel was once a dark beer.

A Duvel is poured slowly into a dry glass, to keep back the yeast, which can be drunk separately. The bouquet is zesty and tickles the nose with citrus aromas – there’s even a hint of grapefruit, thanks to the use of the best and noblest varieties of hop.

This can also be discerned in the taste, which is beautifully balanced with a hint of herbs (again, thanks to the unique Duvel-Moortgat yeast) and the well-known, and much loved, pure-beer character of a Duvel.

Thanks to the high CO2-content, the beer has an ecstatic roundness in the mouth, making it a unique combination of thirst quencher and aperitif. The experience is completed by a long-lingering, dry aftertaste.

Duvel is a high fermentation beer with re-fermentation in the bottle. It is re-fermented both in warm and cold storage rooms, in turn.

Because of this long re-fermentation it takes three months before the freshly-brewed Duvel enters the market.

A light blond and very clear beer, with a creamy-white head and a fine pearlisation with tiny bubbles, as is typical of Duvel.

The Duvel glass is nothing less than a Belgian beer icon. It was launched at the end of the 1960s, and was the first tulip-shaped degustation beer-glass. Because the glass narrows towards the top, it helps to preserve carbon dioxide and thus the frothy head.

Fresh and subtle hop aromas. A touch of fruit with a slightly bitter aftertaste. Quality bitterness with a dry finish, intense pearlisation.

Duvel is a classic beer for matching with many hard cheeses too, and it’s no coincidence, therefore, that the brewery is marketing some cheeses of its own.

Although Head Brewer, Hedwig Neven, says that Duvel is at its peak when it leaves the brewery, some beer lovers like to keep their Duvel a bit longer before tasting it.

According to its label, Duvel bottles can be stored for 30 months. The beer is best kept for up to two years after bottling, to avoid the taste or the colour being affected. Best stored in a cool, dark place.

You can buy your Duvel in bottles of various sizes: 33cl, 75cl and 1.5 litres. Sadly, the Duvel that we know and love is not available on tap in its homeland. However, there is a draught version available in some countries, including the USA and the UK.

This is referred to as “Duvel van t’vat” (or on tap), and is also bottled as Duvel Green (7.5%), with a label in green letters instead of red. This beer has undergone a single fermentation only, and although it is far rarer, it can be found in Belgium. Besides this lighter Duvel version, you will also find the Duvel Tripel Hop.

Duvel-Moortgat has made inroads into the US market, with both its Ommegang Brewery and its recently acquired Boulevard Brewery. Thanks to the brewery’s world-wide export activities, and its own online shop, you shouldn't find it hard to get hold of this classic Belgian beer.