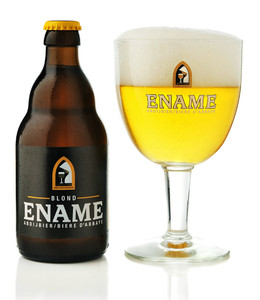 1990 was an important year for Brouwerij Roman, as they launched a triumphant trio of abbey beers: Ename Blond, Dubbel and Tripel. The launch coincided with an open air spectacle held amongst the abbey ruins. The Ename Blond was, perhaps, the most favoured of these three, and, in 2002, Roman also introduced a winter beer called Ename Cuvée 974 (now known as the Cuvée Rouge).

This abbey beer actually makes a quite massive leap back into history. In fact, its roots go all the way back to the Treaty of Verdun in 843. Under this treaty, the river Scheldt became the designated border between Flanders and the Germanic Holy Roman Empire. A fort was built at Ename, with the purpose of keeping the Count of Flanders, and his army, on their side of the river.

However, in 1063 the fort fell into the ownership of Benedictine monks, who converted it into an abbey. Before long, beer was being brewed here, for a fruitful, long seven centuries. Then, Ename abbey's story was ended, as it was destroyed during the French Revolution. It was never rebuilt.

With a history like that to match up to, Ename Blond is bound to be complex: a thirst quencher and degustation beer all in one. Refreshing, light but with plenty of complexity.

Ename Blond is traditionally brewed, using only the finest of ingredients: water from Roman's own well, their in-house yeast strain, fine malts, hops and a dash of candi-sugar.

This beer can be said to be a true blonde: markedly pale, and vibrantly straw-coloured, it gives forth a lovely, creamy white (and very stable) head.

The Ename beers are served in a classic, branded chalice, typical of the kind used for abbey beers.

There is an obvious fruitiness in the nose. The taste has touches of citrus (lemon, tangerine and orange). It is complex, with a malty sweetness, fruity and hoppy notes.

All told, a robust, yet light beer, with a nice dry and lasting finish.

A delicious pairing with asparagus prepared the Flemish way, with prawns and white fish. It can also be successfully added to the cooking juices when preparing mussels.

Due to its subtle taste and dry finish, this is a rather versatile beer, able to find a place in many fine recipes in the kitchen. It also works well paired-up with some of your favourite dishes. For example, this is one Belgian Blond that works like a treat alongside something hot and spicy, like a curry.

But, as is the golden rule in beer-pairing, dare yourself and be open to experimentation with both tastes and aromas: don't be averse to follow your gut feeling (as it were), especially when it comes to a beer as versatile as the Ename Blond.

The Ename Blond was brewed to be enjoyed fresh and crisp, so there's no need to keep it any longer than necessary. Some beers (although not many) can evolve and improve somewhat over time. This Blond is one that won't.

Store upright in a dry, cool and (preferably) dark environment. It will keep in the bottle for up to 24 months. On tap it will hold its own for around 10 months in the keg.

Ename Blond is available in both 33 cl bottles and 30 litre kegs. The beer is very much current in Belgium at the moment, and can be readily ordered in many of the nation's beer café's. It can also be bought in local beer shops, specialised purveyors of alcoholic beverages, or even in some Belgian supermarkets.

As with the other Ename beers, the Blond is also exported by the brewery outside Belgium, so it can be enjoyed by beer enthusiasts around the globe with relative ease.

Ename Dubbel
History and beer often go hand in hand when it comes to Belgian beer. That's undoubtedly the case with the Ename Dubbel, a dark abbey beer that shares an interesting back-story with the rest of the Ename family, the Tripel, Cuvée ...
Facebook
Twitter
Google
Email
Pinterest
GET LATEST BEER NEWS