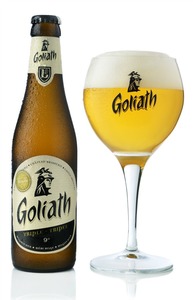 Ath is the city of giants. You can watch them on parade during the annual Ducasse d'Ath procession held over the fourth weekend of August. Goliath – Gouyasse in the local dialect – always heads the march.

Not far from the parade route is the medieval fort of Irchonwelz, dating back to the 12th century. This is where Pierre Delcoigne and Vinciane Wergifosse set up the Brasserie des Légendes. The first Gouyasse flowed from the tanks in 2000.

Brasserie des Légendes uses natural ingredients only, hops from Poperinge for example, and re-ferment their beers without any added sugar.

In the brewery your eye is first caught by the wood-clad, cast iron mash kettle from 1890, and the imposingly tall copper boiling kettle that was installed in 1930.

In the Goliath range are this Tripel, the Goliath Blonde, and Winter. Brasserie des Légendes also produces Quintine - the witches’ beer that is brewed at the brewery’s Ellezelles site - Hercule Stout, Saison Voisin, Ducassis (an organic, gluten-free fruit beer) and Legends Harmony.

Strong blonde tripels are extremely popular in Belgium, so most brewers offer their own version, as Brasserie des Légendes do in the name of the giant Goliath.

Goliath Triple is a top-fermented beer that also re-ferments in the bottle.

When poured correctly in a dry and clean glass this triple takes on a clear golden-yellow colour below a cloud of white froth.

Goliath Triple is served in an elegant degustation glass on a tall stem. It preserves the head and enhances the aroma of the beer for the drinker.

This is a fruity, full-mouthed, balanced and quite hoppy beer with a long, dry, bitter finish.

Beer and cheese make a great couple, especially when the beer is this full-mouthed, rather dry triple. It is also delicious with a fine cut of beef, or fish.

As with all Belgian beers, tastes and preferences are always personal so don't be afraid to experiment when it comes to finding the perfect pairing!

Goliath Triple can be stored in the bottle for 36 months. In kegs it will keep for 9 months.

This is a beer developed and brewed to be enjoyed young, as with all beers of this type it is not conceived to be stored.

When stored keep your bottles upright in a cool, dry and dark environment. Light, moisture and heat are the three main natural enemies for any beer.

As with the other beers brewed by Brasserie des Légendes you will find this beer in specialised shops and bars around Belgium.

When travelling around the brewery's home province of Hainaut you will have to make a real effort not to come across this one in fact.

Outside of Belgium you will be able to pick some Goliath up via the usual channels.

Quintine Blonde
In 2006, Brasserie Ellezelloise, in the village of the same name, merged with Brasserie des Géants from Ath and Brasserie des Légendes was born. Both breweries already had something in common in their love of the unique folklore ...
Facebook
Twitter
Google
Email
Pinterest
GET LATEST BEER NEWS