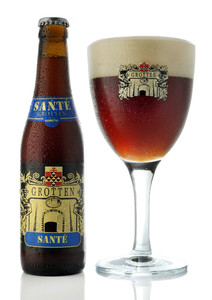 Grottenbier, or ‘cave beer’ was created many years ago by one of the greatest Belgian brewers, the (late) Pierre Celis, the legendary founder of...Hoegaarden.

His idea achieved widespread popularity, and has now found a new home in the Kazematten, or casemates (a type of gun emplacement or bunker), of Ypres, one of the iconic Belgian First World War sites.

Grottenbier was created with a particular purpose: to discover how consistently low temperatures, such as those found in a cave, would affect the evolution of a beer’s taste.

And the temperatures in the bomb-proof souterrains of the former fortifications of the city of Ypres, where this beer now matures, are both low and stable.

When the production of Grottenbier was taken over by Brouwerij Kazematten the beer underwent a face-lift that is reflected in its new name - Grottenbier is now known under the name of Grotten Santé.

Nevertheless, the recipe has remained unchanged.

Grotten Santé is a zesty beer with an alcohol volume of 6.5%, and is made using small quantities of exotic herbs that create a slight dryness. The beer has a chestnut brown colour.

Grotten Santé is a top-fermented beer that re-ferments in the bottle.

The beer takes on a chestnut brown colour and produces a delicate pearlisation underneath a cream-coloured head.

Grotten Santé is served in the same chalice that is also used for the brewery’s Wipers Times 14.

Grotten Santé has a mild taste, with a subtly sweet touch and a mildly bitter finish. It is a malty, fruity and zesty beer.

When it comes to paring and cooking with Grotten Santé the story is the same as with any beer of your liking, one has to experiment to find your favourite flavour combinations.

Grotten Santé is a recommended accompaniment to poultry, fish, spicy dishes or desserts.

The beer also matches up well with a nice blue veined Belgian cheese like Achelse Blauwe/Grevenbroecker.

Grotten Santé can be stored in the bottle for up to 24 months; in kegs it will keep for 6 months. As with the other beers from De Kazematten brewery Grotten Santé is released from the brewery when it has reached the perfect age to enjoy.

In other words follow the advice of the brewer and drink the beer within the set period of 24 months. Any prolonged storage will not improve the taste experience.

Our usual tip; when storing beer always keep the bottles upright and try and do so in a dark, cool and dry location.

Grotten Santé is available bottled (33cl, 75cl) and on tap (20l kegs). A Grotten Santé gift set is also available at the brewery and via specialised channels, this includes a 75cl bottle and glass.

Thanks to the association with Brouwerij St. Bernardus this beer is readily available in Belgium and abroad.

The Wipers Times 14
Wipers Times 14 is the first beer from Brouwerij Kazematten. It gets its name from the famous ‘trench gazette’ written by British soldiers during the First World War. This small newspaper was an exceptional mix of jokes, black hu ...
Facebook
Twitter
Google
Email
Pinterest
GET LATEST BEER NEWS