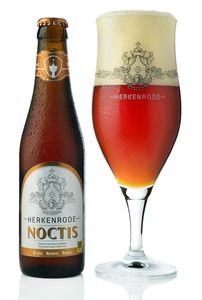 All that remains of the former abbey of Herkenrode near Hasselt is the magnificent 17th century abbey farm. The oldest traces, including the remains of a brewery, go all the way back to 1182.

Brewer Jef Cornelissen Senior was responsible for launching this abbey beer with the assistance of Robert Putman, formerly engineer-brewmaster with Cristal-Alken.

Jef’s brief was ‘to brew a beer with the powerful attitude of the Counts of Loon, the elegance of the abbesses of Herkenrode and the aromas of the herb garden’. Since 2009 Herkenrode has been providing its own ‘recognised’ abbey beers: Herkenrode Bruin and Herkenrode Tripel.

Herkenrode Noctis (7%) is an orange-amber coloured abbey beer, brewed with 100% Munich malt derived from summer barley and brought up to taste with aroma hops.

The taste is enhanced by allowing the beer to mature on wood for a month which gives it a smoky touch and a hint of vanilla. But what makes this abbey beer so special?

Just like the tripel, it goes down easily and is served in an elegant tasting glass. The beer is unpasteurised, ensuring that the rounded taste is fully preserved.

A dark abbey beer such as this is often denoted by the term ‘dubbel’, indicating a higher proportion of ingredients (a higher dosage) than ordinary beer.

The beer takes on a light brown colour in the glass and provides tiny pearls from underneath a cream-coloured layer of froth.

Herkenrode Noctis is served in an elegant tasting glass on a tall stem.

The first taste yields a quite noticeable bitterness thanks to the interplay of the roast malts and the aroma hops. The finish is zesty and slightly sweet.

Herkenrode Noctis is recommended as a companion as well as an ingredient for classic stews such as ‘Vlaamse karbonaden’.

The semi-hard Herkenrode cheese, flavoured with ‘Roomse kervel’, an aniseed-flavoured herb otherwise known as Sweet Cicely, is rinsed in this beer.

The brewery recommends a storage period of 18 months at the most. Some dark abbey and Trappist beers can be stored for longer.

However, that is not the case for this dubbel as it has a relatively low alcohol content.

The beer is available in 33cl and 75cl bottles. The name of Cornelissen beers is not yet widely known and this also goes for the Herkenrode label; this is something the brewery is actively and successfully rectifying.

Despite this, you will be able to source this abbey beer from better beer stores and specialised beer cafés. It can also be found abroad.