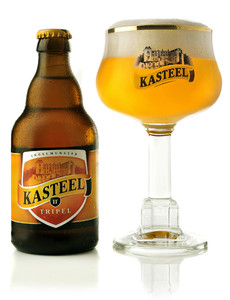 Kasteel Tripel is a West Flemish tripel through and through, enriched with Belgian hops. Brewery CEO Xavier Van Honsebrouck firmly states that this Tripel is as solid as a castle, and let’s be fair, there are few Tripels that achieve such a high alcohol content.

This beer was launched a few years after Kasteel Donker, which makes it the second oldest member of the Kasteel family.

The outstanding mixture of noble malts and hops lend this tripel an exquisite aroma and a particularly mild taste.

Originally this beer was called Kasteel Blond, until the brewery chose to produce a new blond variety with a lower alcohol volume. This was then named Kasteel Blond whereas the original brew was re-baptised Kasteel Tripel.

The Kasteel Tripel also serves as the basic beer for “Trignac”: the first Tripel matured in brandy barrels.

Top-fermentation, re-fermented in the bottle. Pasteurised, centrifuged and filtered.

Kasteel Tripel is a glossy beer with a crystal clear golden colour. When poured correctly it will reward you with a voluptuous frothy head.

Like all members of the Kasteel family, a Kasteel Tripel is preferably poured into and enjoyed from the well-known Kasteel glass with the golden rim.

This artisanal beer has a velvety soft but also robust and creamy finish.

In the same way as the Kasteel Donker and Cuvée du Chateau, Kasteel Tripel is promoted as a degustation beer. It is an excellent addition to a number of culinary recipes and deserves its place on the table. Kasteel Tripel goes wonderfully well with asparagus, for example, or with desserts including banana.

Spicy Eastern dishes in which you may come across ginger, cinnamon and chilli will also make a great pairing with this beer.

If you want to use Kasteel Tripel in the kitchen, just like the Kasteel Blond it can be added to the cooking juices in the preparation of mussels.

Thanks to its high alcohol content, Kasteel Tripel can be stored for a considerable amount of time. We have already been able to taste tripels from other breweries that were over 12 years old.

Although the beer is then a considerable distance away from tasting like a tripel, taste evolutions such as these are highly prized by a small group of beer lovers.

It’s up to you to put this to the test and start storing a number of bottles in optimum circumstances, that is to say: cool, dry and shaded from the light.

Together with Donker this is an important representative of the Kasteel range by Castle Brewery Van Honsebrouck's. This beer is continuously brewed in Ingelmunster.

Next to getting hold of Kasteel Tripel through re-sellers and supermarkets you will be able to find it quite easily via (online) specialised beer shops.

You also won’t have any problems finding Kasteel Tripel in the more beer orientated bars and cafés. As with many of the Kasteel brews their Tripel is exported and sold across the world.

Bacchus Frambozenbier
Bacchus Frambozenbier (Framboise) is similar to Bacchus Kriekenbier as the base for both fruit beers is Bacchus Oud Vlaams Bruin. Fresh raspberries are added to the beer which will continue to mature before leaving the brewery. T ...
Facebook
Twitter
Google
Email
Pinterest
GET LATEST BEER NEWS