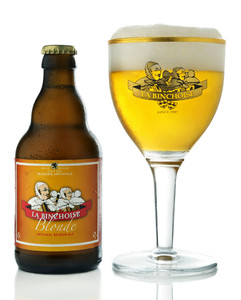 La Binchoise Blonde is an icon in the world-famous carnival city of Binche. The Gilles – the mask-wearing, costumed, clown-like revellers - drink it to celebrate Mardi Gras.

This beer, introduced in 1995, harks back to a light blond beer produced by Meunier, another local brewery, in the 1960s.

The recipe for La Binchoise Blonde was inspired by Fakir, a blond brewed by André Graux who re-established the La Binchoise brewery in 1989.

La Binchoise Blonde is now in the capable hands of his successor Bruno Deghorain, Binche born-and-bred and a proud Gilles during the annual carnival.

The range has since been extended with La Binchoise Brune, Spéciale de Noël, XO and Triple.

Thanks to the use of these last two ingredients that are usually found in white beer, this blonde falls midway between a blond and a white beer.

The phenolic acids from the yeast reinforce its zestiness. The yeast flocculates – clumping together and dropping out of suspension - beautifully so the beer clears out in a natural way.

La Binchoise Blonde is served in a high-stemmed chalice that depicts the Gilles of Binche. This carnival beer is proud of its heritage.

The nose detects subtle aromas of hops, coriander and orange peel. This is a fresh, fruity, delicately bitter thirst-quencher with a pleasant finish.

La Binchoise Blonde will happily pair up with almost every dish.

It is particularly recommended in combination with summery salads, beef, white meat, croquettes made with shrimp or cheese, goat’s cheese and classics such as asparagus with hard-boiled egg, fresh parsley and potato mousseline.

Storage in bottle: two years when stored correctly in a dark, cool and dry place. The beer will keep for six months on tap.

Certainly in and around the region of Binche you will have no problem finding this beer in cafés, restaurants, shops and supermarkets. In the North of Belgium it is less readily available.

Brasserie La Binchoise does export a percentage of their production so you will also be able to taste it outside of Belgium too.