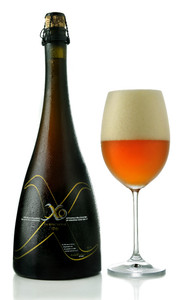 Over the last few years many breweries have introduced degustation beers matured on wood. The beers are stored and aged in barrels previously filled with wine, whiskey or cognac, absorbing the aromas and flavours of the barrel’s previous occupant and gaining a more complex taste.

Brasserie La Binchoise’s Bruno Deghorain introduced his XO in early 2008. This beer has ripened in barrels previously filled with Armagnac.

The XO, the strongest beer in the La Binchoise range, has a complex taste of beer and fruit from the Armagnac – it is a bit of an outsider.

Bruno came up with the idea for the XO during a trip to Italy, inspired by that country’s viniculture. However, for his new beer he selected old Armagnac barrels from the Landes region in south-western France in preference to Italian wine barrels.

The XO ferments and matures in horizontal barrels, is then subjected to cold storage and a slight dry hopping with fresh hops before re-fermenting in the bottle.

The taste is predominantly determined by the long maturation in the barrel, creating a degustation beer that preserves its ‘beery’ character but is, at the same time, permeated with the full aromas and rich taste of an Armagnac.

XO stands for Exceptionally Old; meaning aged for a minimum of six years.

A top-fermented beer, matured in Armagnac barrels, re-fermented in the bottle.

La Binchoise XO is cloudy, with a pinkish amber colour underneath a broken white head of froth. It has a very slight pearlisation.

La Binchoise XO should be served in an elegant wine glass.

On first tasting, the nose detects aromas of apple, raspberry and vanilla. This beer has a sweet but slightly bitter taste with impressions of roast malt as well as wood.

The warming glow of alcohol comes to the fore when the beer is warming up.

Thanks to its mild pearlisation this complex beer veers towards a liqueur, with an aftertaste of old Armagnac and a slightly sweet finish.

This wood-matured degustation beer is a natural digestif. It behaves at the table like a light wine and makes an excellent pairing with several dishes; the XO awakens the taste buds.

It is recommended with game dishes such as roast venison with a chasseur sauce or a pepper sauce. XO Also makes a good companion for dark chocolate and chocolate desserts.

La Binchoise XO keeps in the bottle for five years.

This beer undergoes a positive taste evolution the longer it is stored in a dry, cool and dark chamber.

Coming straight from the barrel the La Binchoise XO is only available in large bottles of 75cl.

This beer is produced in very limited volumes so it goes without saying that you will not find it just anywhere. However, you will be able to buy some at the brewery itself and in some specialised supermarkets and beer shops. With a bit of luck you will also find it abroad on occasion.