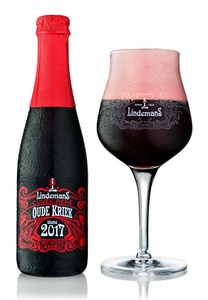 Lindemans belongs to the very select group of lambic breweries that up to this day are brewing authentic lambic beers in the area of the Senne valley in the Brussels region.

The taste of these beers is quite tart which makes them not really that different from wine.

The process of fermentation, maturation and development happens in much the same way. After six months the beers grow in complexity and, thanks to the slow refermentation that takes place inside the bottle, they continue to evolve for years on end.

The production of Lindemans Oude Kriek Cuvée René does not require any blending. The brewer adds whole krieken cherries to a lambic that has aged for at least six months old in oak ‘foeders’ (huge barrels made of wood).

These krieken cherries will then ferment in the barrel for at least another six months until they produce a lovely ‘kriekenlambiek’. This lambic is then transferred into 75cl bottles where it will continue to ferment.

The fermentation in the bottle produces carbon dioxide, which accounts for the delicate bubbles and almost translucent collar of froth. Lindemans Oude Kriek Cuvée René takes on a ruby-red colour in the glass covered by a a pinkish-red cloud of froth.

This kriek is a thirst quencher par excellence. Its slightly sour and sparkling taste turns it into an ideal aperitif. The range of this brewery also includes a Gueuze, Oude Gueuze, Faro and Kriek.

When it comes to fruit beers, it also offers a Lindemans Pecheresse (peach), Framboise (raspberry), Cassis (blackberry) and Apple.

A spontaneously fermented beer that re-ferments in the bottle.

This beer takes on a ruby colour underneath a reddish-pink collar when served in the elegant, tall-stemmed tasting glass with a logo that is reminiscent of the Belle Epoque.

Lindemans Oude Kriek Cuvée René is served in an elegant, tall-stemmed wine glass which preserves the aromas beautifully and ensures that the collar holds its shape for quite a while.

A fruity beer with the pure, refreshing taste of krieken cherries. The acids contained in the beer are pleasing to the palate with a fine balance between fruity and sour.

The tart touch coming from the tannins produced by the fruit pips flows into a mildly fruity aftertaste that lingers for a while.

This refreshing, sparkling, slightly sour beer makes for an ideal aperitif. It is a great pairing with rabbit recipes and also presents a successful contrast with soft, blue-veined cheeses, a Stilton or Bleu des Causses for example.

Can be stored for several years in a dark and cool cellar. The taste of this ‘oude kriek’ will continue to develop thanks to its re-fermentation in the bottle.

For the best storage results always keep your bottles upright in a cool and dry place.

Available in 37.5cl and 75cl bottles. The brewery is very active in the export market delivering their popular lambic beers from Asia to the United States so you will be able to find this Kriek outside of Belgium.

Lindemans Framboise
Europeans have been drinking fruit beer for centuries. The Celts were partial to apple beer. The Belgians mastered the brewing of fruit beers a long time ago. This tradition goes back hundreds of years. Fruit lambic is the best k ...

Oude Gueuze Cuvée René
‘Pajottenland champagne’. That is the name given by lambic brewers to these spontaneously fermented – no yeast is added – lambic beers that are not dissimilar to wine. It is no coincidence that lambic brewers use champagne bottle ...
Facebook
Twitter
Google
Email
Pinterest
GET LATEST BEER NEWS