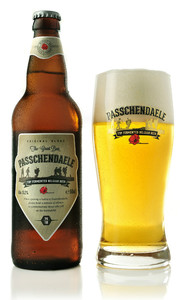 Passchendaele is one of the more recent additions to the extensive range offered by Castle Brewery Van Honsebrouck. This beer was brewed in collaboration with the 'Memorial Museum' in Zonnebeke and 'Genootschap Passchendaele 1917'.

After a year’s brewery testing this beer was introduced in the early spring of 2013. It revealed itself to be a light, high fermentation beer but with a really quite modest alcohol content. This in itself is exceptional and emphases the idiosyncratic character of the brewery.

To ensure that memories of the Great War and the Battle of Passchendaele remain alive, some of the the revenue generated is to be donated to the municipality of Zonnebeke to help maintain their memorials. This is also the brewery’s way of remembering all those who lost their lives.

The beer was developed and intended to be as close as is possible to what soldiers would have drunk during the war.

This beer harks back to the basic ingredients in use at the time: malt, (Belgian) hops, yeast and water.

For this unique beer, the glass selected is very far removed from that normally used for Belgian beers. It was decided to serve Passchendaele in an English pint glass. The glass is available in a half pint (25cl) and full pint format and comes with the official logo of the Passchendaele Society.

As mentioned before, the idea behind this beer was to get close to the taste of beer brewed and and drunk in the region during WWI. To this end, the brewery carried out extensive research.

The outcome was a fresh thirst quencher with a zesty finish, thanks to the Belgian hops.

This beer was not specifically designed to be a culinary or gastronomic beer, unlike the Trignac or Cuvée du Chateau.

Nevertheless, it is a perfect companion to delicate fish dishes or a summertime barbecue.

It also suits spicy dishes of Eastern origin, such as Thai, Indian curries or couscous. If you are enjoying this beer in Belgium you will find it makes a lovely pairing with two of the highlights of our national cuisine: mussels with fries or steak with fries.

It was meant to be a fresh thirst quenching brew and this is how it should be enjoyed. The taste will not improve with storage.

Passchendaele was created with a view to the international market so it is widely available both within Belgium and far beyond its borders. Like Kasteel, exports reach as far afield as Australia.

Available in the Anglo-Saxon countries and in the front line countries of WWI.