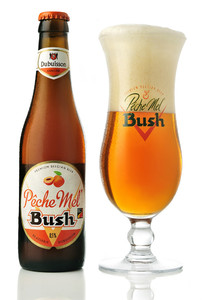 As the name suggests, Pêche Mel' Bush (Pêche Mel Scaldis) is a marriage between Bush Ambrée, perhaps the strongest of Belgian beers, and ripe peach juice. Allegedly it was students who came up with the concept (and the name): they mixed a 'beer cocktail' that was a simple blend of Bush Ambrée and a peach-based geuze.

Dubuisson adopted the idea, but their take on Bush-plus-peaches makes use of their own recipe, involving a heavy dosing of Bush Ambrée with natural peach extracts. The brewery introduced Pêche Mel Bush in 2009. With an ABV of 8.5% the brewery puts in a good claim for having the 'strongest fruit-flavoured beer' in Belgium.

The Pêche Mel Bush is a filtered, top-fermented beer.

Golden blonde, with a generous collar of froth, small amount of pearlisation.

The Pêche Mel Bush is served in the elegant, tulip-shaped Dubuisson glass.

The natural aromas of the peach extracts mingle well with the hoppy-bitterness of the Bush Ambrée. A sweet initial taste of peaches, soon developing with those characteristic Bush yeast flavours, all riding along on a firm body. The impression left is of a balanced fruit beer that tastes full in the mouth, gifting both palate and nose with lingering notes of peach.

Without prompting, fruit beers are usually associated with sweet desserts. However, beer chef Hilaire Spreuwers is all for taking a completely different approach with the Pêche Mel Bush. He pairs its fruity sweetness with sweet-tasting rare beef, and jazzes up the sauce tartare to go with a steak tartare. Taste it and you will be convinced. The Pêche Mel Bush is also the perfect partner for a blue cheese or a sheep’s milk cheese.

Pêche Mel Bush is available in 33cl bottles and on tap (20 l barrels).

Bush Ambrée
This is a venerable brew, which has recently marked its 80th anniversary. 1933 was the year that the Bush Ambrée (Scaldis Ambrée) was first introduced, under the name of Bush Beer. It is one of the oldest speciality beers in Belg ...
Facebook
Twitter
Google
Email
Pinterest
GET LATEST BEER NEWS