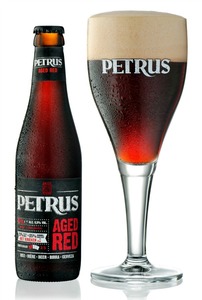 Petrus Aged Red is a unique dark fruit beer matured in oak foeders. Unlike a traditional kriek, this Morello cherry beer is not based on a spontaneously-fermented lambic beer. The brewer’s greatest challenge was to find the right balance between a fruit beer and a foeder beer.

Petrus Aged Red is ruby-red in the glass with a flavour that is slightly sour but sweet at the same time.

It is a blend made up of 15% of Petrus Aged Pale - a pure foeder beer that has matured for two years in oak barrels - and 85% of Petrus Dubbel Bruin, with added cherries.

The sharp sourness of the Petrus Aged Pale comes through immediately, accompanied by the mild, sweet and sour flavour of the cherries.

Petrus Aged Red is recommended for lovers of fruit beers who want something that isn’t too sweet.

Since the 1970s the De Brabandere brewery has specialised in foeder beers, gradually increasing its range.

Petrus Aged Red takes on a clear ruby-red colour in the glass underneath a head of cream-coloured froth.

In the nose, aromas of sweets made with sour cherries.

You taste a pleasant bitterness on a slightly sour background with touches of wood.

In the finish, the mild cherry sweetness continues to reverberate.

Flemish red-brown beers such as the Petrus Aged Red are a good culinary match for shellfish and crustaceans.

This beer is also delicious served with duck, salads served with a vinaigrette or a helping of strawberries or raspberries.

Try it to provide a contrast with dark chocolate or blue-veined cheeses.

The brewer recommends keeping this beer for up to 24 months in the bottle and for up to 8 months on tap.

All of the oak matured Petrus beers have been aged to perfection so there is no need to keep for longer than advised.

Petrus Aged Red is available in 33cl and 75cl bottles and on tap (20l). The brewery has been in existence since the 19th century so their beers can be found across the length and breadth of Belgium; De Brabandere beers can readily be found in cafés, supermarkets and specialised beer shops.

The brewery exports their beer worldwide with great success so even outside of Belgium you should be able to find it without too much effort; alternatively you can try online beer shops.

Kwaremont
The Oude Kwaremont is a cobbled road that ascends steeply for a distance of 2.2 km up the Kluisberg hill in Kluisbergen, East Flanders. Nicknamed the ‘calf biter’, it forms part of the route of the legendary Tour of Flanders cycl ...