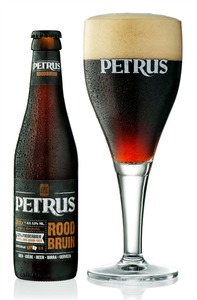 It is a relatively light beer and a perfect thirst-quencher, ideal as an aperitif or with food.

Petrus Rood Bruin is a blend of 33% of Petrus Aged Pale, a pure foeder beer that has matured in the casks for two years, and 67% of a young, brown beer.

These “cut” beers were traditionally made to extend shelf life. The younger, darker beer provides the colour and the Petrus Aged Pale contributes the sour flavour impressions.

Since the 1970s the De Brabandere brewery has been gradually building its range of specialist foeder beers.

Petrus Rood Bruin takes on a dark brown colour in the glass underneath a creamy head of froth.

Petrus Rood Bruin is served in an elegant tall stemmed glass. The distinctive tulip shape it is perfectly suited to let the beer's aromas fully develop.

Petrus Rood Bruin has aromas of candied fruit and figs; there are fruity accents of cherry and peach and scents of malt, butter and caramel.

The predominant taste is a slightly sour, lactic acid, flavour.

Flemish red-brown beers are not unlike wine so they are equally suitable as aperitifs or with a meal. As an ingredient they will add a freshly sour touch to stews and sauces.

They are delicious served with vinaigrette salads, goat and sheep's milk cheeses and chocolate.

The brewer recommends keeping this beer for up to 24 months in the bottle and for up to 6 months on tap (keg).

There is no need or use in storing this beer any longer than recommended as there will be no further positive taste evolution.

Available in 33cl and 75cl bottles and on tap (30l kegs). This traditional Oud Bruin ale is widely available throughout Belgium in specialised cafés, beer shops and supermarkets.

Outside Belgium you will also have no problem finding this one thanks to the extensive and successful export activities of brewery De Brabandere.

Kwaremont
The Oude Kwaremont is a cobbled road that ascends steeply for a distance of 2.2 km up the Kluisberg hill in Kluisbergen, East Flanders. Nicknamed the ‘calf biter’, it forms part of the route of the legendary Tour of Flanders cycl ...