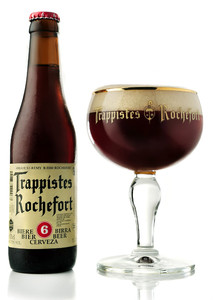 This Trappist beer finds its origins in the pre-war bottled beer destined for the sick and infirm. But further back, 1899 was the year that first saw the monks of Saint-Remy in Rochefort light the fire under their kettles, in their new, small brewery. The beer they brewed then was a precursor of today's Rochefort 6.

Sales were modest to begin with, disrupted as they were by two World Wars. Those wars also shaped those early beers – the occupier decreed that beers should not have a density higher than 0.8°. But an exception was made for those beers intended for the sick. They could go as high as 5°.

So Rochefort 6 started out as a beer designed for 'medicinal purposes' only, attaining its present form with a little help from fellow Trappists. After the Second World War, when Rochefort was suffering from Chimay’s success, the 'confrères' of Chimay agreed to lend Rochefort a helping hand. The first fruit of that cooperation – and the oldest member of the Rochefort family – is the Rochefort 6. It was introduced to the market in 1953.

This fine brew, topped off by a red-bottle cap, is only produced for a few weeks every year. It is predominantly served in the abbey’s guest quarters. Of the members of Rochefort trio, this is the mildest and driest variety. The Rochefort 6 certainly has character, but it is less rich and complex than that of its two brothers. A mild and fruity beer, it is slightly herbal, malty and sweet, with a touch of caramel. The quiet bitterness it has only becomes apparent in the finish.

High fermentation beer that re-ferments in the bottle.

Out of the three Rocheforts, this one proves to be the ‘lightest’ when it comes to colouring. This amber-coloured Rochefort gives a clear appearance in the glass, under a collar of froth that is just off-white. Please take note that this brew comes with a sizeable quantity of yeast that can be poured into the glass, if you so desire.

Just like the Rochefort 8 and 10, this beer is best-enjoyed in the characteristic Rochefort chalice, with its golden imprint. This glass is also marketed with a yellow print, but it is less easy to find than the ‘gold’ version.

In the nose, hints of mocha and caramel and a yeasty herbalness (cloves, pepper) are rounded off with a slightly sour taste. You can taste biscuit, caramel and pear, beautifully balanced with a slightly roast bitterness and a touch of cloves. In the finish, the pearls flow away and culminate in a rounded dry taste.

A lamb stew with carrots – under a covering of bread spread with ‘graanmosterd’ (mustard including the seeds) – is the kind of dish just begging for a Rochefort 6. Add a risotto, made with a creamy cheese and fungi, as a perfect complement to such a meal, while a cheese-board – with delicacies such as honey, nuts and dried fruits – will turn this meal into a veritable feast.

Store the Rochefort 6 in a vertical position, in a dark and cool space. The beer can be kept for at least five years. There are some beer lovers who claim that its taste will evolve in an interesting way, if stored for longer. However, the 6 is unlikely to attain the longevity of the Rochefort 10, which has a markedly higher alcohol content.

The 'red' Rochefort 6 only makes up a tiny percentage of the entire Rochefort output. That makes it harder to find than the others, and in common with the Rochefort 8 and 10 it isn't available on tap.

However, you will be able to find the 6 at specialised beer and alcohol stores, and in a number of beer-focused cafés. A number of retailers do limit the quantity they will sell to each customer, however.

Outside of Belgium, using the right channels, you should be able to track down this beer. One place you almost certainly won't be able to find it, though, is in the supermarket.

Rochefort 10
In 1952, in order to place the modernisation of the brewery on the right commercial footing, much care was taken with the launch of Rochefort's two new beers. The refectory beer, had been the basis for the development of the ‘Mid ...

Rochefort 8
History and provenance are readily apparent, in the taste of the 8. Ever since the 1960s, Rochefort’s own yeast culture has produced those characteristic esters in its divine brews. And even today, in 2014, Rochefort's famous Tra ...
Facebook
Twitter
Google
Email
Pinterest
GET LATEST BEER NEWS