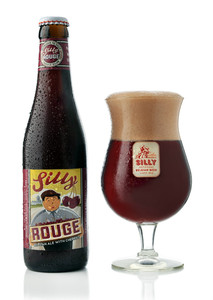 The overriding impression is one of sweetness, picked up by the nose as well as the tongue.

Hints of nuts, caramel, candy sugar and maple syrup are complemented by a touch of sourness provided by the cherry stones.

This strong fruit beer with its deep red colour makes a great addition to the extensive range offered by this family brewery based in the village of Silly, about 50kms south-east of Brussels in the province of Hainaut.

This brew’s mother beer, Scotch de Silly, is a reminder of the First World War.

When the hostilities ended, Scottish soldier Jack Peyne remained in the village, teaching the Silly brewers how to make a genuine Scotch ale.

The Silly Sour is a new saison with a sour-ish taste, a blend of 85% mature and 15% young saison beers, in keeping with traditional recipes.

Silly Rouge is a top-fermented beer.

Silly Rouge pours dark red in the glass underneath a cloud of froth.

Silly Rouge is poured into a branded glass in the shape of a Scottish thistle head.

The symbiosis between natural cherry juice and Scotch de Silly results in a strong fruit beer with pronounced aromas.

The taste is dominated by cherries and the slightly sour touch in the finish comes from the cherry stones.

Silly Rouge is a perfect ingredient for a sabayon. It also makes good combinations with berry fruits or in a chocolate dessert.

Silly Rouge will keep in the bottle for 24 months. On tap, it can be stored for up to six months.

For optimal storage it is best to keep your bottles upright, in dark, dry and relatively cool place.

Available in 33cl bottles and on tap in 20 litre kegs. Brasserie de Silly exports their beers around the world so you will be able to get this beer also outside of Belgium.

Silly beer can be found in Belgium via the usual channels; supermarkets, beer shops, specialised beer café's and the like...