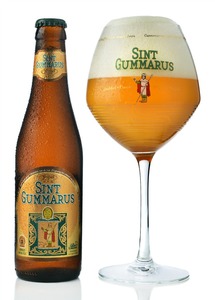 Saint Gummarus is the patron saint of the small town of Lier, situated in the Kempen region. Gummarus is said to have performed quite a few miracles.

He managed to create a spring just by touching the ground with his stick, a feat that the brewers found very interesting, not to mention useful.

In honour of this Saint, the cosy tavern in the nearby open-air museum of Bokrijk bears the same name. This tavern was transferred from the town of Lier; lock, stock and barrel.

The Cornelissen brewery entered the world of strong beers with its Sint-Gummarus Tripel and Dubbel. Sint-Gummarus is not a recognised abbey beer as it is not linked to a current or former abbey.

Sint-Gummarus Tripel is the first tripel made in the province of Limburg. This beer, copper-blonde in colour, is the fruit of an extended brewing process in which the beer is given plenty of time to mature.

This tripel has a fruity aroma with a slightly bitter finish. The sturdy collar of froth stays upright for quite some time in the elegant serving glass. The aromas evoke alcohol and malt.

The ‘tripel’ name is a reference to a strong, top-fermented beer, blonde to amber in colour, which re-ferments in the bottle and was inspired by abbey beers. Belgians do love their tripels.

The beer takes on a coppery-blonde hue in the glass and is covered by a beautiful, cream-coloured layer of froth.

As with the other beers brewed by the Cornelissen brewery, Sint-Gummarus Tripel is served in it's own branded tasting glass.

This beer’s aromas are influenced by alcohol and malt. This tripel has a fruity flavour and provides a slightly bitter finish with touches of herbs.

This fully rounded but rather dry tripel makes an excellent pairing with Belgian cheeses and meat preparations.

This beer can be stored for 24 months in the bottle. It will keep in the barrel for 12 months.

The tripel beer style is not suitable for laying down beyond the best-before date advised by the brewery.

Available in 33cl and 75cl bottles and on tap (30 litres). The average beer lover is not instantly familiar with the Cornelissen name; however, the brewery is actively marketing its beers beyond Belgium’s borders.