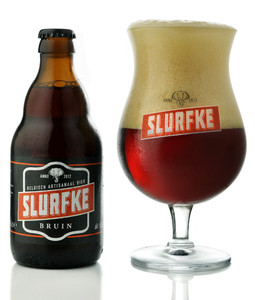 Dark Beer of the Dubbel Type

In the north of Belgium everyone knows what a Slurfke is: it is the beer that Eddy Van Noteghem, a main character in the wildly popular television series 'Thuis' ('Home'), is busy brewing with his friends. Now this fictitious beer has been created for and in the real world.

The many fans of 'Thuis' were keen to taste this beer that they had become familiar with on the small screen.

The VRT television network asked Castle Brewery Van Honsebrouck to start developing and brewing the Slurfke based on the original recipe from the television series. The name Slurfke means ‘little trunk’.

Although this beer is a spin-off from a television programme, it is far more than a mere commercial stunt. It has been created craftsmanship with to produce a high-quality beer with a great taste.

Slurfke is a robust, artisan, dark degustation beer of the dubbel type. Roast malts account for its dark colour and contribute touches of caramel and coffee.

The brewery is best known for its own Kasteel beers, St-Louis Gueuze and fruit beers, the Brigand tripel, the strong blond Filou, the Bacchus range brewed in the oudbruin style, the pale-blond top-fermented beer known as Passchendaele, the Barista beer made with coffee and chocolate and Trignac, matured in brandy barrels.

A dark brown beer, that, provided it is poured correctly into its own proprietary glass, produces a lush, delicate head of café-crème-coloured froth that sticks to the side of the glass and holds its own for quite a while.

This beer is served in an elegant, branded, tulip-shaped glass that ensures the frothy head stands up and the aromas linger beautifully.

Slurfke gives strong impressions of caramel and coffee, thanks to the roasted malt, in addition to fruity hints of banana and vanilla provided by the yeast.

The aftertaste is slightly sweet.

This beer cries out to be served with game dishes. It also makes a useful addition to the preparation of several traditional meals.

Slurfke, in its bottle, will keep for 24 months. Store the beer vertically in a cool and dark environment is advised.

Storing this beer for a longer period than the best-before date recommended by the brewery will not enhance its flavour.

Available in 33cl bottles. This beer is a relatively new introduction to the Belgian market.

Nevertheless, it is easy to obtain, particularly in Flanders, via the Prik&Tik shops and Delhaize supermarkets.

Bacchus Frambozenbier
Bacchus Frambozenbier (Framboise) is similar to Bacchus Kriekenbier as the base for both fruit beers is Bacchus Oud Vlaams Bruin. Fresh raspberries are added to the beer which will continue to mature before leaving the brewery. T ...