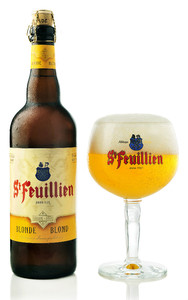 The name of both the beer and the brewery harks back to an Irish monk who died a martyr’s death when he arrived to evangelise the region. He was elevated to sainthood and, after his death, Le Roeulx became a pilgrimage destination. The Saint-Feuillien Blonde, Brune, Triple, Cuvée de Noël and Grand Cru are all recognised Belgian abbey beers.

The range was launched in 1952, in honour of the Premonstratensian abbey of Le Roeulx, which was founded in 1125, this is why the label carries this date, before being destroyed in 1796, during the French Revolution. History sources point to brewing activity at the former site of the abbey, located in the private grounds of Le Roeulx Castle.

St-Feuillien Blonde abbey beer has a surprisingly perfumed bouquet, with a top note provided by the aromatic hop varieties and a delicately bitter taste. Spices provide a fruity touch. Saint-Feuillien Blonde tastes full in the mouth with a robust malty aroma and a dry, hoppy finish. It all makes for an excellent digestive.

As the name indicates, St-Feuillien Blonde has a deep gold colour, the white collar of froth is delicate and airy.

St-Feuillien Blonde is best-served in the traditional St-Feuillien chalice which was designed especially for their abbey beers.

The Saint-Feuillien Blonde has a perfumed bouquet with top notes of aromatic hop varieties. The spices provide a fruity, citrusy touch. The beer tastes full in the mouth with a delicate bitterness and a robust presence of malt. The aftertaste is dry with a pronounced hoppy finish.

The slightly bitter Saint-Feuillien Blonde is suitable for use in the preparation of white meats and poultry and to accompany these dishes. Also delicious in partnership with a salad. This blonde makes an excellent companion for a Parmesan cheese or a Pérail des Cabasses unpasteurised goat’s cheese from the Pyrenees. Last but not least, a recommended pairing with the Saint–Feuillien cheese from Ferme du Bailli in Soignies.

Can be kept in the bottle for 24 months. Keeps for 12 months in the barrel.

St-Feuillien Grand Cru
Wine lovers have known for a very long time that the Grand Cru label promises the very highest quality. This has inspired brewers to launch their own of range of special flagship beers that are just that little bit more full in th ...
Facebook
Twitter
Google
Email
Pinterest
GET LATEST BEER NEWS