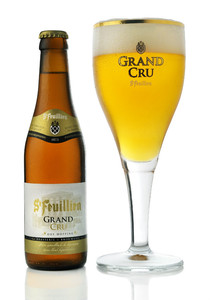 Wine lovers have known for a very long time that the Grand Cru label promises the very highest quality. This has inspired brewers to launch their own of range of special flagship beers that are just that little bit more full in the mouth, offering a richer and more complex taste.

The St-Feuillien Grand Cru is a worthy addition to the range. This degustation beer, re-fermented in the bottle, pairs its rounded character with a pronounced flavour, impressions of hops and yeasty aromas.

No herbs are added in the production process of this beer. The St-Feuillien Grand Cru stands up well to gastronomic challenges, which may be the reason for its name and its elegant serving glass.

This beer forms part of the range of St-Feuillien abbey beers that also includes the Blonde, Brune, Triple and Cuvée de Noël. If we truly want to discover the origins of the name of the brewery and the eponymous beer we need to delve into the past.

In the 7th century AC, an Irish monk by the name of Folian travelled through what is now Belgium. In 655, he paid the ultimate price for his fervour to convert the local pagans. Folian died a martyr’s death in the village of Le Roeulx, the current home of the brewery. In later years Folian was elevated to sainthood and Le Roeulx turned into a site of pilgrimage.

The year 1125 saw the foundation of a Premonstratensian, or Norbertine abbey. This date, not coincidentally, proudly adorns the label of the St-Feuillien abbey beers.

The French Revolution in 1796 heralded the end of many abbeys in Belgium and St-Feuillien proved no exception. This particular abbey was never rebuilt. St-Feuillien takes great pride in producing its ‘recognised’ abbey beers.

This official recognition denotes that history has proven that brewing activity took place at this abbey site that is now part of the private domains of Le Roeulx Castle.

Turns a sunny, clear, pale blond colour in the glass below a collar of airy, pure white froth.

A wide array of hop aromas with touches of fruit (orange, citrus, tangerine), wood, roast malt and vinous are the main characteristics of this degustation beer.

All its ingredients are beautifully balanced; the taste sensation passes from slightly bitter to a more pronounced flavour of hop bitters that comes to the fore in the long and complex aftertaste.

St-Feuillien Grand Cru stands its own when paired with strongly flavoured meat preparations, a foie gras for example, and fish dishes made with a robust fish such as red bream.

The St-Feuillien Grand Cru will keep for 24 months in the bottle, store your bottles in a cool, dry and dark place.

St-Feuillien Grand Cru is available in large and small bottles containing 33cl and 75cl respectively. You are able to get hold of it through the usual specialised channels.

St-Feuillien Blonde
The name of both the beer and the brewery harks back to an Irish monk who died a martyr’s death when he arrived to evangelise the region. He was elevated to sainthood and, after his death, Le Roeulx became a pilgrimage destination ...
Facebook
Twitter
Google
Email
Pinterest
GET LATEST BEER NEWS