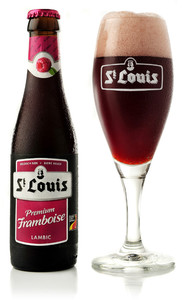 St. Louis Premium Framboise is a fruit beer based on traditional geuze lambiek. During the brewing process 25% juice is added, produced from Willamette raspberries.

Before the St. Louis Premium range saw the light in 2001 (to take advantage of the increased market demand for sweeter fruit beers) Van Honsebrouck had been brewing the St. Louis Framboise.

This framboise was based on lambiek and had an initial alcohol content of 5% which was subsequently lowered to 4.5%. For a while, this beer was marketed under the Dutch brand names “St. Louis Frambozen” and “St. Louis Frambozenbier”, but these names are no longer used.

At various points in time, the beer went under the names of “Gueuze Framboisée” and “St. Louis Framboise”. Since the alcohol percentage was reduced to 2.8% and the “Premium” range was launched they stopped producing any further versions of this beer.

This St. Louis Premium Framboise will appeal to beer lovers of all ages thanks to its modest alcohol volume and its fruity character.

Just like all St. Louis Premium fruit beers, this framboise is produced on the basis of a traditional geuze lambiek.

The lambiek is brewed in the artisanal way and matures in oak barrels to acquire the characteristic spontaneous fermentation.

St. Louis Premium Framboise has gueuze lambiek as its base. This basic beer is brewed with malted barley, unmalted wheat and hops.

Sugar and raspberry juice (including the pips) are added to the brew.

This framboise has a dark red/pinkish colour and is relatively clear. It comes with a beautifully creamy head which again is slightly pink.

This beer is enjoyed from the elegant glass that was designed for all St. Louis Premium fruit beers.

This St. Louis Premium Framboise is a summery thirst quencher. Thanks to its low alcohol content, you can enjoy more than one. Pronounced aroma of raspberries with a lovely balance of sweet and sour.

No strong taste of malt or hops but that is not this beer’s intention.

An aperitif beer par excellence that will liven up any summer garden party whatever is on the menu.

In the kitchen it will enhance the preparation of summery desserts and it goes very well with spicy dishes that use ginger or cinnamon for example.

As this beer was intended to be a thirst quencher, it does not have the necessary qualities for laying down. There is absolutely no point in keeping it.

This Framboise is available both bottled and on tap far beyond Belgium’s borders. If you want to try it out, you will not have any major difficulties in locating this brew through the better off-licences and (online) beer shops, wherever you live.

In its home country this beer also has a fairly wide distribution and is readily available.

Kasteel Hoppy
Kasteel Hoppy is a recent addition to the Castle Brewery Van Honsebrouck Kasteel range. It was launched in 2013 in response to the trend for more hopped beers. This is a high fermentation blond beer, rich in hops, and thanks to th ...