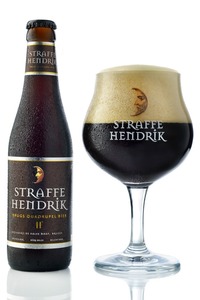 Straffe Hendrik heralded the era of strong degustation beers brewed by De Halve Maan in Bruges. It is the flagship beer produced by the oldest brewery in Bruges’ inner city, known for its Brugse Zot Blond and Donker (Dark).

Straffe Hendrik is synonymous with living beers with a taste that evolves thanks to the re-fermentation in the bottle. De Halve Maan can boast five hundred years of brewing history.

As a one-off, in 1981 De Halve Maan produced a special "straf" top-fermented beer to commemorate the inauguration of a statue of St. Arnold, the patron saint of brewing, in the city of Bruges.

The name is not only a reference to the ‘strong’ (straf) beer that flows out of its tanks but it also pays homage to the generations of Maes scions, all called Henri – Hendrik –who were in charge of the brewery.

The Straffe Hendrik family was launched with the eponymous tripel, followed by the quadrupel.

The brewery also produces ‘special editions’ including Straffe Hendrik Heritage, matured on wood with a recipe that varies every year, and Straffe Hendrik Wild, brewed with wild yeasts.

The dark quadrupel is stronger than the tripel. Belgians became familiar with this beer type thanks to the quadrupel produced by La Trappe, a Trappist abbey in the Netherlands. Straffe Hendrik Quadrupel was one of the first quadrupels in Belgium.

A very dark beer with a colour leaning towards a stout but with the dense, light brown head of a caffè latte.

Straffe Hendrik Quadrupel is served in an elegant tulip-shaped degustation glass on a tall stem that allows the aromas to deploy themselves to the full.

A rich beer, intensely dark in colour that tastes full in the mouth. The aromas are zesty and elegant with hints of roast malt.

You can taste coriander, dark fruits, aniseed and roast chestnut. The finish is slightly syrupy.

Can be stored in the bottle for 36 months. On tap, it will keep for 12 months.

Bottles should always be stored upright in a cool, dry and dark place; light is a natural enemy of beer when it comes to taste and aroma.

Over the past decade Brewery De Halve Maan has seriously expanded their beer realm.

The brewery has acquired worldwide fame with their "beer pipeline" and their beers, including Straffe Hendrik, are now available across the globe.

Straffe Hendrik Tripel
The launch of Straffe Hendrik – still the brewery’s flagship beer - heralded the era of strong degustation beers at De Halve Maan. Its brewer is the oldest in Bruges, based in its historic city centre, and also well known for its ...