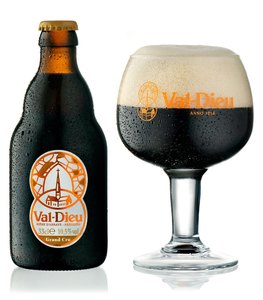 The dark, full-bodied Val-Dieu Grand Cru is a powerful quadrupel with a lengthy finish, stronger than the same brewery’s tripel, which is usually blonde in colour.

This beer delivers surprisingly complex flavours and aromas, many of them really mild and subtle, including a gentle orange perfume. Under a café crème coloured head, impressions of caramel seamlessly complement mildly bitter coffee aromas.

The Val-Dieu range also includes Val-Dieu Blonde, Brune, Triple, Cuvée 800 and Noël. All of the Val-Dieu beers re-ferment in the bottle, which accounts for three weeks of a six-to-eight-week production cycle.

Local soft water from the Gileppe reservoir is used in a traditional infusion method that involves adding hot water to the mash until the temperature is raised to 75°C.

At this temperature the starches are released that will, in the next stage, be converted into the sugars that feed the yeast. The brewery uses its own yeast, cultivated in-house, for the main fermentation, and it’s a yeast that creates fruity aromas in the final product.

Val-Dieu Grand Cru is a top-fermented beer that re-ferments in the bottle.

Val-Dieu Grand Cru is brewed with water, yeast, barley malt, and hops from Germany and the Czech Republic.

In the glass, this beer takes on an inky black colour underneath a delicately structured yet strong head with the colour of café crème.

The chalice-like glass designed for Val-Dieu beers is reminiscent of Christian liturgy, lending the beer an almost sacred allure. The double ring, the emblem of Val-Dieu Abbey, is engraved at the bottom of the glass - and with a little bit of luck, it will appear in the froth when the beer is poured. On the bottle label you’ll see the abbey depicted against a background of lilies. And once again, the emblem with the double ring and the motto ‘in vinculo pacis’ (‘in the bond of peace’) is represented as a symbol of strong ties with God and a community that strives for peace and calm.

The zesty taste of Val-Dieu Grand Cru comes from the strongly roasted malt.

The beer has scents and tastes of caramel, toffee, raisins, and prunes borne along on an undercurrent of strong alcohol. The finish is mild, rounded and creamy.

Val-Dieu Grand Cru will keep in the bottle for 24 months. On tap it can be stored for 6 months.

Bottles should be stored upright, and are best kept in a cool, dark environment.

Val-Dieu stands strong in it's own region but the beers are also available across Belgium and abroad.