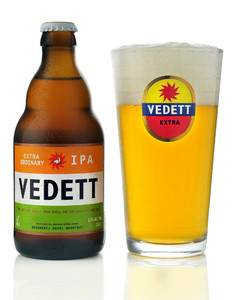 India Pale Ale, or IPA, is an out-and-out success story on an international scale. That we know this beer style at all, is thanks to the Brits. When they created this beer, they added extra hops so the IPA would be able to weather the long sea journey to India unharmed.

Fast-forward a few years and US microbreweries are discovering the style. They emphasise this beer’s hoppy bitterness, using American and exotic, bitter and aromatic hop varieties. With Houblon Chouffe, Duvel Moortgat introduced their first Belgian IPA. This was to be followed by Duvel Tripel Hop and finally the Vedett IPA.

Vedett is a heritage brand, named after an export pils that first came onto the market in the 1940s. This retro label lingered in the background for dozens of years until it was revived with a relaunch to fashionable, young clubbers in Brussels in 2003. It is now enjoying a renaissance.

Since the relaunch, the Vedett IPA has been joined by the Vedett Extra Blond pils and the Vedett Extra White wheattbier. The Vedett Extra Ordinary IPA is an unfiltered, top-fermented beer that re-ferments in the bottle. Two varieties of American hops are added during the boiling process and a further two are used for the dry hopping.

The result is a refreshing, hoppy and complex beer with fruity, floral and green aromas underpinned by citrusy flavours (grapefruit), with a mild bitter taste and a long, dry finish.

Vedett IPA is a top-fermented beer that re-ferments in the bottle. It is left to re-ferment in both the warm and cold rooms.

This copper-coloured beer stands out with its slightly cloudy appearance, characteristic of an unfiltered beer that re-ferments in the bottle.

A slight pearlisation occurs underneath a luxurious, cream-coloured head of froth.

The wonderful and exceptional aroma of this beer is clearly derived from the use of different varieties of hops. These come to the fore in a balanced marriage between hints of sub-tropical citrus fruits and, on the other hand, an abundance of floral as well as green, fresh aromas.

The taste has a pronounced, but mild bitterness that gains in intensity towards the finish, when impressions of bitter grapefruit come through. This gives the beer its thirst-quenching character and helps the beer to go down very well.

All of this is fired up by a smooth, malty undercurrent with hints of sweet caramel reaching the surface. Vedett IPA ends with a long-lasting, dry finish that really stays with the drinker.

Finally, on the cheese front, we can recommend a combination with red-veined cheeses. Vedett IPA is also the ideal partner for desserts made with dark chocolate, pink grapefruit, tangerines, avocado or lychees.

Vedett IPA keeps in the bottle for 12 months without affecting its taste or colour. It should be stored in a dark and cool environment.

Vedett IPA is available in 33cl bottles and on tap (20l). Vedett is an important brand for the Duvel-Moortgat brewery and, just like La Chouffe, you will find it easy to track down this beer in Belgium and far outside its borders.

Vedett Extra Blond
Duvel-Moortgat has been brewing export pilsners for many years, and right up to the present-day the brewery has been well-known for its BEL pils. The Vedett Extra Blond brings all this pils experience together, but represents, wi ...
Facebook
Twitter
Google
Email
Pinterest
GET LATEST BEER NEWS