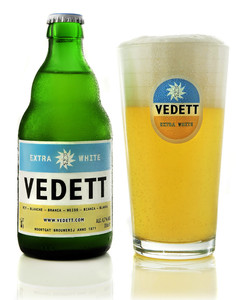 Wheat beer is an inseparable part of Belgian beer culture. No surprise then, that, after the success of the Vedett Extra Blond, the Vedett Extra White saw the light of day, in 2008. The thinking seems to have been that a premium pils should be complemented by a premium wheat beer. And rightly so.

The initial appearance of the beer is slightly cloudy and pale, with a greenish shine. Immediately after pouring you can discern the herbal aroma in the glass – but it's not overpowering.

Citrus is the main note, with some coriander in the background. The taste is mild, slightly sour and slightly grainy, which provides for the desired full-mouth feel.

This beer is outstandingly refreshing, a great thirst quencher with a sweet, honeyed, lightly-perfumed finish. In order to ensure that taste has developed fully, the beer is re-fermented for a number of weeks, either in the bottle or the barrel.

A top fermented beer, with re-fermentation either in-bottle or in-barrel.

A light blond and cloudy beer. The cloudiness is part of the style, with its natural ingredients making for this characteristic effect in the glass.

When the beer is chilled and poured correctly, it will form a creamily white head, with tiny bubbles.

The Vedett Extra White is served in the same fluted glass as the Vedett Extra Blond, just with a different logo. A more compact glass is available, just as it is for the blond version.

With fresh, subtle aromas of citrus and herbs, Vedett Extra White has a beautifully invigorating and amazingly fresh taste – accentuated by the orange peel and coriander – which is then rounded off with a mildly sour taste, and a dry finish. There is a subtle bitterness from the yeast.

In the kitchen, this beer works well added to the cooking liquor of mussels and other shellfish.

After bottling this beer can be stored for one year in the bottle and for nine months on tap. It is best stored in a dark, dry and cool room with a constant temperature.

Barrels are stored upside down so that the yeasts mix properly.

Bottles should be stored standing up. The beer can be stored for up to one year in the bottle or barrel with no ill effects on its taste or colour. In common with the Vedett Extra Blond there is no point in storing this beer for over a year.

Vedett Extra White is available in 33cl bottles and on tap (in 20 or 30 litre barrels). In common with most Duvel-Moortgat beers, this one is as easily found in-store as in the café, both in Belgium and abroad.

Vedett Extra Blond
Duvel-Moortgat has been brewing export pilsners for many years, and right up to the present-day the brewery has been well-known for its BEL pils. The Vedett Extra Blond brings all this pils experience together, but represents, wi ...
Facebook
Twitter
Google
Email
Pinterest
GET LATEST BEER NEWS