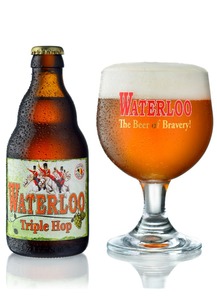 It’s all in the name. Waterloo Triple Hop, an amber-coloured beer, is brewed with three different kinds of hop: Magnum bitter and two aroma varieties, Cascade and Citra, that in the dry hopping give an additional aroma boost.

This Belgian Triple Hop is the perfect addition to the range of Waterloo beers and joins the ranks of Waterloo Triple Blonde, Strong Dark and Récolte.

The Waterloo beers commemorate the world-famous battle that was fought here by the troops of Wellington, Blücher and Napoleon Bonaparte in the year 1815.

The entirely restored, historic Ferme de Mont Saint-Jean, just on the edge of the battlefield, is home to a microbrewery and distillery.

When the battle was raging in 1815, this traditional farm built in the shape of a square was converted into a field hospital to treat the British soldiers.

Nowadays you can tour the brewery and its distillery and pay a visit to the museum that tells you all about the Battle of Waterloo.

Gold with a hint of orange with delicate bubbles and a robust, creamy collar.

Fruity, zesty and flowery aromas with touches of citrus (grapefruit) and exotic fruits.

This beer tastes full in the mouth but retains its freshness and yields fruity as well as sweet impressions.

The sweet malt serves to tone down the hop bitter. Hop dominates the finish and is accompanied by a hint of grapefruit and apricot.

Waterloo Triple Hop makes a perfect pairing with tangy dishes such as an escaveche of trout, sashimi, grilled meats with a sauce béarnaise, pre-dinner snacks of pickled vegetables or a clafoutis with stone fruits for dessert.

Will keep in the bottle for 24 months. Keep your bottles upright in a cool, dry and dark environment.

Available in 33cl bottles and on tap.. Brasserie de Waterloo is part of Anthony Martins finest drinks group, the company has been active in import/export and distribution for more than a century. It will come as no surprise then that you will be able to get your hands on some Waterloo pretty much anywhere.

Waterloo Triple Blond
We Belgians are keen on our ‘tripels’. And we enjoy our strong blond beers. The use of the term ‘tripel/triple’ denotes beers with larger amounts of ingredients added to the mash, but over the years ‘tripel’ has turned into rather ...

Waterloo Récolte
Waterloo Récolte is a traditional Belgian farm beer, in the same family as saisons from Hainaut or the white beers of the Brabant region. All the ingredients can be sourced from the fertile fields around Waterloo and in the near ...
Facebook
Twitter
Google
Email
Pinterest
GET LATEST BEER NEWS