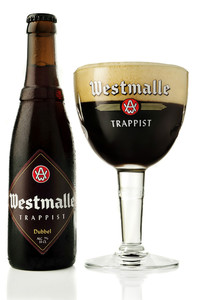 It was Prior Alexius who, at the start of the 19th-century, decided to motivate the Westmalle brothers with his so-called 'liquid sandwiches'. Every single morning he would offer breakfast accompanied by two glasses of beer – which, by the way, contravened the order’s strict rules. But from 1836 onwards, the monks were allowed to partake of regional drinks – and so indulge in this popular local beverage.

So this was how beer became part of the menu for Westmalle's monks, many of whom came initially from France. That first brewery was built in 1836, and in the same year the first dark, sweet high-fermentation brew flowed out of the kettle. To complement this brown table beer, an even darker Trappist beer was created in 1856. This was to be the fore-runner of the current Westmalle Dubbel, which officially arrived in 1926.

At the time of its creation, it was instantly known as the heaviest beer in Belgium – and again Westmalle became a point of reference for this particular beer-style. The phrase ‘dubbel’ was initially used to imply the much larger amount of ingredients being used. Nowadays, a Dubbel is considered a heavy, dark beer which can be either sweet or bitter.

The Westmalle Dubbel is just such a well-balanced beer, full in the mouth, both herbal and fruity. Its initial sweet taste blends into a mild finish with bitter hops. The Westmalle Dubbel is now being served, freshly poured, in around three hundred cafés and restaurants. A point to note on this, though: on tap, the Dubbel has a slightly sweeter taste, when compared to the bottled variety.

A high fermentation beer that re-ferments both in the bottle and in the barrel.

The Westmalle Dubbel is brewed with barley malt, sugar, hops, yeast and water.

A deep reddish-brown colour, showing up clear in the glass, under a covering of a nicely-dense collar of froth, which has the colour of café crème.

Westmalle Dubbel is served using the same Westmalle tulip-shaped glass as the Tripel. This chalice is very much characteristic for all Belgian Trappists. There is a smaller version of the glass that is often used for tasting. These drinking vessels are commonly available at specialised off-licenses and beer shops.

Coming out from beneath that coffee-coloured froth, you can pick up aromas of banana and chocolate, as well as touches of herbs (vanilla, aniseed), but without the bitter hint of roast malt. The mouth enjoys impressions of milk chocolate and mild espresso, followed by the sweet fruitiness of alcohol, all of which is, finally, rounded off by bitter-yet-elegant touches of hops. The finish offers a taste of slightly bitter chicory.

Think about a freshly-poured Westmalle Dubbel, and bread might just spring to mind – after all, it was the monks liquid sandwich. And a chunk of freshly-baked loaf – with sliced banana and a sprinkling of sugar, perhaps – does indeed make for an ideal complement.

Alternatively, on the savoury side of things – and with a little more time – prepare a venison stew, with Westmalle Dubbel to dip your bread into. Or enjoy this Trappist with a poire belle Hélène. It also (naturally enough) makes for a great pairing with the Westmalle abbey cheese.

Best stored in a cool and dark space. There is no specific ‘best before’ date but bear in mind that the taste of this beer will change with storage. This evolution will also be different for the smaller (33cl) bottles, compared to the larger size (75cl). The standard disclaimer applies, though: When it comes to storage and aging, there are as many opinions as there are beer-lovers.

Westmalle Dubbel is available in small (33cl) as well as large (75cl) bottles. The neck of all of the 33cl bottles is adorned with a ring carrying the Westmalle inscription.

Approaching three hundred cafés offer this beer on tap. The draught beer is exceptional, as it continues to ferment in the barrel. Its taste will therefore give a slightly different impression, when compared to the bottled variety – many say it is sweeter. This beer, in common with the Westmalle Tripel, will be quite easy to obtain, both within Belgium and abroad.

Westmalle Tripel
In 1934, the successful opening of the new Westmalle brewery was celebrated with a ground-breaking new ‘super beer’, brewed on the very same premises. Widely acknowledged as the first 'tripel' in the world, it was based on a reci ...
Facebook
Twitter
Google
Email
Pinterest
GET LATEST BEER NEWS