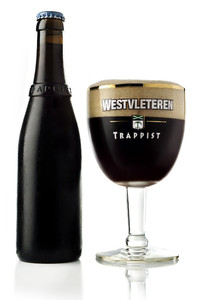 Westvleteren 8 is 12’s little and lesser known brother. It’s sadly also sometimes less appreciated, and is said by some to be the least popular (recognised by its blue bottle cap) of the active varieties made by the Sint-Sixtus monks.

But these are just opinions and malicious gossip and could be considered normal when your big brother is an international rock star and your little sister happens to be a fresh, crisp blonde.

The truth is that they are three different and very individual beers, this makes them almost impossible to compare to one another.

Westvleteren 8 has his fair share of worldwide followers as well - and do not be mistaken, this beer is as elusive as any other Westy. It also pops up in the same listings and rankings of top beers . Proving along the way, that it’s all just a matter of public relations and personal taste…

It must be, as this is a great, grade A, top beer in its own right. Westvleteren 8 deserves its presence among the greater beers of the world.

As with any of the beers the Sint-Sixtus Abbey of Westvleteren has produced since 1831, the recipe is kept as secret as that of Coca-Cola.

As the brewery is located in the heart of a region in West Flanders called “hops country” we know that most of the hops used, if not all, are produced locally in and around Poperinge. The yeast used in the process comes from the Abbey of Westmalle.

If you went the distance to get some… how hard can it be to find the glass?

The Westvleteren 8 is a sweetish beer with a rich, malty complexity and a medium to good carbonation. It boasts a variety of fruity aromas as cherry, raisins, fig and even melon.

A bit of spice and just a hint of bitterness are noticeable at the end. A very balanced, medium to full-bodied trappist that guarantees some smooth drinking... A very nice beer indeed.

Just like the blonde, the Westvleteren 8 goes superbly well with the pure taste of freshly cooked grey shrimp from the North Sea. Due to its sweetness it is certainly very usable in the preparation of desserts.

The 8 is also a useful beer addition to 'Stoofvlees' or 'Vlaamse Karbonaden', one of Belgium’s most well-known and classic, traditional dishes. It is beef braised in beer and has even chocolate or coffee in it, all depending on the region and the grandmother that passed on the recipe to you.

The fact is, as the beer is so difficult to hunt down and capture, you’re more likely to end up drinking one instead of cooking with it… But that all depends on the level of decadence one likes in his cuisine of course.

As with the Westvleteren 12, this is certainly a beer that can be kept for a while and really does age and evolve rather well.

According to the monks only the blond one doesn’t keep. And the monks know best, so watch out for people claiming something different…

Similar to the 12 this is also a 'must have' for your beer cellar, if the hype is keeping you from stocking up on any… be the bigger man here. We can assure you, sooner or later you will have regrets if you pass by on the opportunity.

The story is the same as with any of the three available beers from Westvleteren. It is difficult to get hold of them, but it is possible, if you are willing to pay the price.

We have found the 8 to be the most available one around.

Westvleteren Blond
Westvleteren Blond - The lightest beer of the Sint-Sixtus family, when confined to its bottle, only to be recognized by the green cap topping it off. This is the beer that the monks themselves drink as their day-to-day thirst quen ...
Facebook
Twitter
Google
Email
Pinterest
GET LATEST BEER NEWS