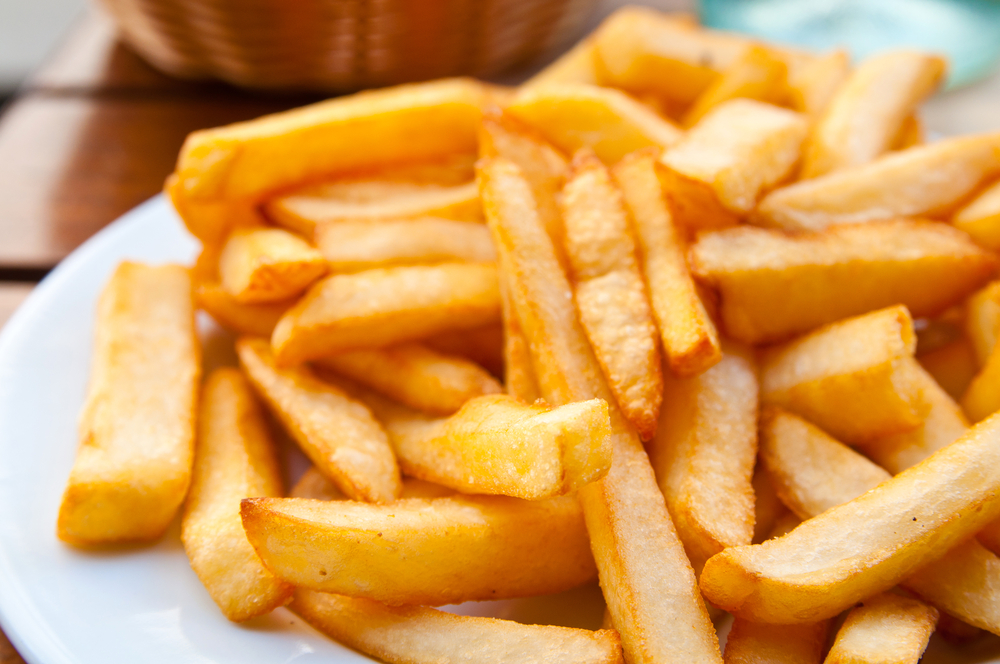 We succumb every single time. Our affection for our national pride, 'frieten' or 'frites', goes as deep as our love for our beer, chocolate and waffles. Nothing tastes as good as a paper cone filled to the brim with golden-brown, fries doused in salt and...

Just image a night out in the cold. And then feel the warmth on your hands from the hot bag of fries you’ve just bought.

But then, the lady serving you wants to know what you would like with your fries? Mayonnaise, pickles, sauce tartare, 'sauce andalouse' (a Belgian sauce of mayonnaise, tomato paste and peppers) or cocktail?

Before you know it, the golden-brown delicacy has been covered in a dollop of mayo, and your fingers are cautiously wandering around the bag to find any fry that is still uncoated in order to dip it into the sauce and stuff it into your face.

Unless you ask for the dressing to be served separately so you can dip in your fries one by one and lick your fingers after every single one. However, we are getting ahead of ourselves. Just as our inner Burgundian knows where to go on a Sunday morning for freshly-baked rolls and 'koffiekoeken' (Danish pastries / viennoiserie), we also have our instincts as to where we go for our freshly cooked fries.

One 'frietkot' or 'friture' – the Belgian version of the chip shop - is very different from the next. They come in all colors, shapes and sizes. Entire volumes have been filled with poetry in praise of the Belgian 'frietkot'. In fact these shops externalize our innate spirit of anarchy.

These stalls, or chippies, are seldom beautiful but they are often charming. Just as an aspiring brewer will set up his brewing kettle in his garden shed, the 'friturist' traditionally starts up his or her business in a shack or cabin, with or without wheels.

It won’t be long before some simple garden chairs appear on the scene, making for a fun place to get-together. And then the rumor mill starts working and more people turn up.

You may have your own regular shop but that won’t stop you from being curious. You want to see how ‘your’ fries are done by someone else. Make no mistake, we have our standards and won’t mince our words.

Any brewer whose beer has a different taste on one occasion will be hauled over the coals. Ditto, there will be a fair dose of criticism for the 'friturist' who allows himself too many creative liberties. After all, rules are there to be followed. And there is one rule that stands above all others: Belgian fries are fried twice. 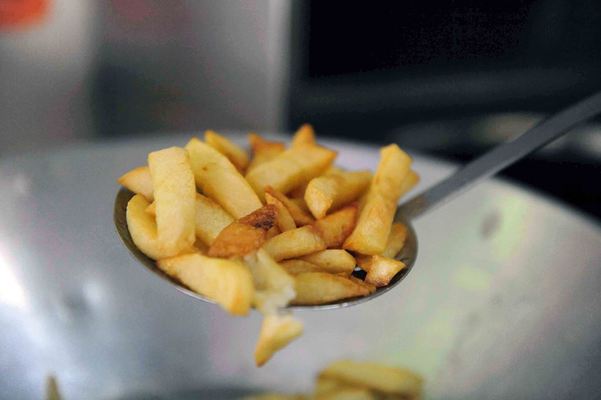 What did they teach us when we were young? Pick a healthy-looking, large potato suitable for frying. Top of the range is the 'bintje' variety, a floury potato that does not turn dark after frying. Other varieties that produce an excellent fry include: Agria, Désirée, Première, Rode Eersteling and Santé.

Peel the potatoes and cut it into strips around 10mm thick. Rinse these raw fries in cold water to remove the excess starch and dry them thoroughly.

And now for the pre-frying stage: gently lower the fries into the fat, heated to 150°C, and leave them to swim for 4-5 minutes. During this stage the raw potato will be cooked without turning brown. Pre-cooking takes some of the moisture out of the potato. If the oil is too hot, the potato sticks will burn and the moisture hasno means of escape, producing saggy fries. Once the fries have started ‘singing’ – they will bubble on the surface – gently lift them out of the fat and shake them off well.

These pre-fried fries should now be spread out and cooled down for at least half-an-hour, longer if possible.

Then heat the fat to 180°C. Gently lower the pre-cooked fries into the fat for a few minutes. This makes them deliciously crispy.

This time they will start to sing after two or three minutes, when you can remove them and shake off the fat. If you are not making your own fries but are having a take-away, take a good look at the shape of the fries. If they are too regular in shape, they have not been cut by hand.

And every Belgian food lover worth his salt will tell you that there is nothing yummier than twice-baked, hand-cut fries with a dollop of home-made mayonnaise.

Our fries have travelled far and wide, but they’re often disguised as ‘French fries’. That’s not fair - the potato has been popular here for far longer than it has been in our big southern neighbor. It is even said that we used the humble potato to pelt the Austrian occupiers during the revolt known as the 'Brabantse Omwenteling' in 1787.

So how exactly were Belgian fries created? In the valley of the Meuse it was usual to fry small fish, the so-called small fry. When the fishermen couldn’t get out to fish, potatoes stood in.

Fishermen’s wives are thought to be responsible for spreading the potato-frying habit along the rivers and canals travelled by their husbands.

The first 'friture' (take-away chip shops) were set up during the second half of the 19th century. But why call them ‘French fries’? During the First World War, the country was almost overrun by British soldiers.

They discovered the fries and associated them with the language then in common use by the Belgian army (French). And so the name ‘French fries’ was born. Just recently, a proposal has been put forward to make the Belgian 'frites' culture part of UNESCO World Heritage.

A similar proposal relating to Belgian beer culture is already underway. We’ll celebrate that with a lovely fry or two. We are so used to quality food in Belgium that it is often taken for granted. It is of course whe...
Read More We would not be dedicating a whole page to this subject if it wasn’t worth it, but Belgium has on...
Read More
GET LATEST BEER NEWS