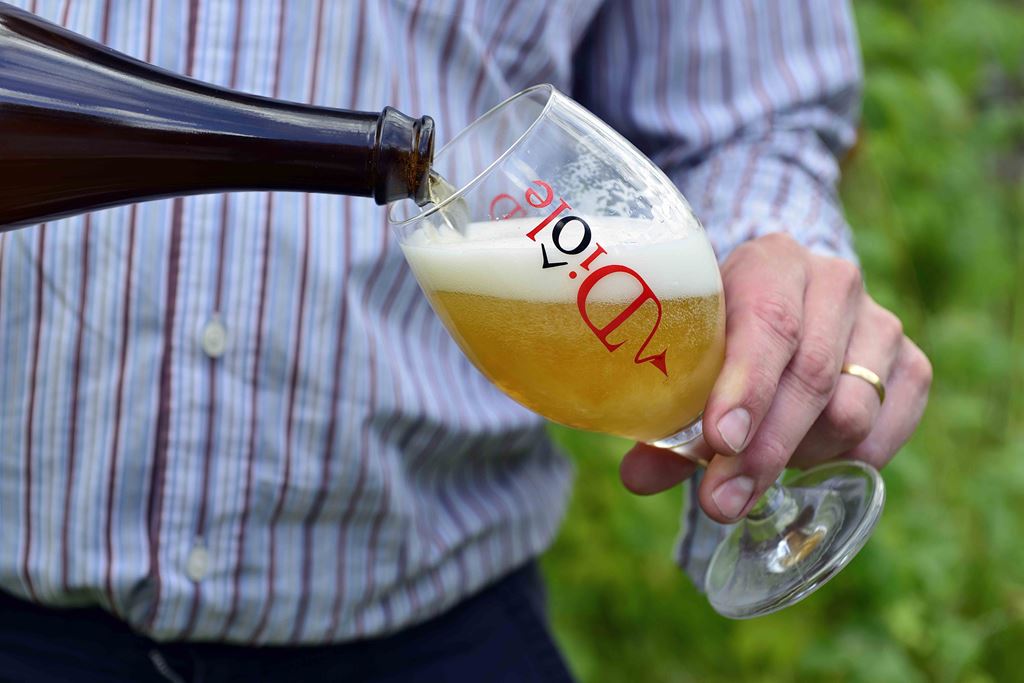 Like many other places in the south of Belgium, Beloeil was a quarrying town. The Basècles area of the town was the source of black marble, and two flooded pits bear testimony to this past industry.

The Brasserie des Carrières microbrewery, founded at the end of 2012, takes its name from these quarries, or carrières.

When founders Julien Slabbinck and François Amorison found that their home brews were getting the thumbs-up from friends, family and acquaintances that was all the encouragement they required to set up their own Belgian microbrewery.

They had already developed and tested a number of brews at the Malterie du Château maltings in Beloeil.

Their first attempt at brewing on their current site, a former sawmill, started on 1 November 2012.

Their debut brew was the unfiltered Diôle Blonde, now joined by in their range by Diôle Ambrée and the Diôle Brune. All three beers re-ferment in the bottle.

Farmer’s son Julien and his mate François like to incorporate the local terroir into their products. The name Diôle is taken from the Picard dialect that is spoken in the Tournai region.

It refers to a tool in the shape of a devil’s tail used for polishing marble.

This devil’s tail also forms part of the brewery logo and the bottle label’s black background is a reference to the black marble that used to be quarried here.

The annual production of Brasserie des Carrières currently stands at around 100,000 litres, but the brewers are aiming to double this in the not too distant future.

They are wise to do so; the first orders from the USA, Italy and France have already been received. 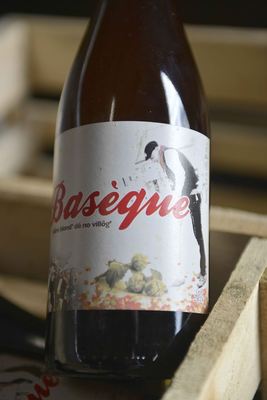 Brasserie des Carrières steers its own course, using its local terroir as a starting point. They brew with fairly hard tap water, removing some of the calcium and chloride before use. Their aim is an accessible, balanced beer with a mild hop bitterness.

To achieve that more hops are added at the end of the boiling process. Basèque, a beer that celebrates the annual hop harvest, is brewed with fresh, home-grown hop cones.

Brasserie des Carrières uses only Belgian aroma hops, achieving a fruity and zesty touch in their beers. They grow hops on site, supplying nearly half of what they need from their own field.

Brasserie des Carrières wants to be a sustainable business. For example, malt is made from barley harvested from fields owned by François’ cousins and malted to the owners’ specifications in nearby Beloeil maltings.

Following the lead of Brasserie Dupont, whose saison beers are an internationally-recognised reference for the modern style, the brewing kettle here is brought to the boil using a gas flame directly underneath it. This makes the mash caramelise slightly so it influences the taste of the beer. A mistake shaped the birth of the Diôle Ambrée: a malt for the Diôle Blonde caramelised too much and affected the colour of the beer.

The result was so well-received that a new beer was born. Three different types of malt are used for the Diôle Ambrée whereas the dark Diôle Brune requires four.

Both top-fermented beers mature with the use of a house yeast that, after fermentation has finished, is harvested from the top of the kettle.

Every three months a fresh yeast strain, cultivated at the nearby university, is introduced and the process starts again from scratch. It is a feature of this yeast that it is able to convert the residual sugars as well as the complex sugars, which lends the beer its dry and easily digestible character.

All of the beers re-ferment completely in the bottle; some of them ferment in the barrel as well. The entire production process takes around seven weeks: nine days for the main fermentation, 21 days to mature, followed by 12 days to re-ferment in the warm rooms. 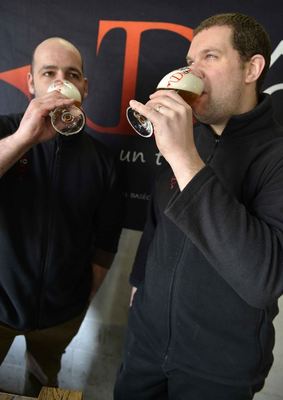 Founders and childhood friends, Julien Slabbinck and François Amorison, have been obsessed by brewing and beer for as long as they can remember. To celebrate the end of their secondary education the pair decided to embark on a ‘small’ tour of Belgian breweries of all sizes.

This 14-day odyssey, on a tiny Mobylette motor scooter that had to carry them as well as their tent, proved extremely educational.

The friends discovered the complexity of a natural product, shaped by humans so that endless combinations can be achieved with those basic ingredients: water, yeast, malt and hops.

Their journey inspired them to study agricultural engineering. François specialised in water and forestry management while Julien chose to follow the brewing path.

Qualification achieved, Julien gained experience with a French brewery in Nantes and, closer to home, with Brasserie d’Ecaussinnes (which has since changed its name to Carpe Diem).

He eventually joined Malterie du Château in Beloeil, where he now manages quality and sustainable development alongside developing his own microbrewery.

For his part, François manages two sawmills in Ghent and Mariembourg. You will not be surprised to learn that François is a scion of a family long active in the timber trade, and even less surprised to hear that the home of the Brasserie des Carrières is a former sawmill in Basècles, owned by François’ grandfather. 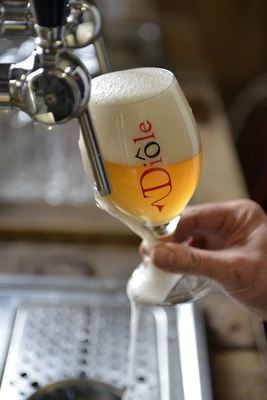 “Sustainable business” is far from being an empty slogan at Brasserie des Carrières. The beer is transported in crates made of the characteristic local poplar wood, and produced at a workshop for the disabled, subsidised by the local council.

The brewery thus contributes to local employment and social projects. And the spent grain from the mashing basin will be used by local farmers to feed the cows who supply the milk used to make a Belgian cheese that is rinsed in Diôle Blonde. And so the circle is rounded.

During a tour of this up-and-coming microbrewery, housed in a former sawmill, you will discover exactly how this short supply chain is put into practice.

Pop in any Saturday to buy your beers or to enjoy a tour personally conducted by François or Julien. You can observe the entire production process, from making the mash down to bottling and filling off the wooden crates.

The duo are planning a brewery café but, in the meantime, you will have to taste your beers at the bar installed between the brewing kettles.

Julien and François are proud of their home region; don’t hesitate to ask them to recommend places to visit.

Make a note in your diary for the first weekend of September, when Basècles hosts a hop festival. To celebrate the occasion, Brasserie des Carrières will offer its Basèque harvest beer, brewed with fresh hop cones and based on a recipe that varies every year. 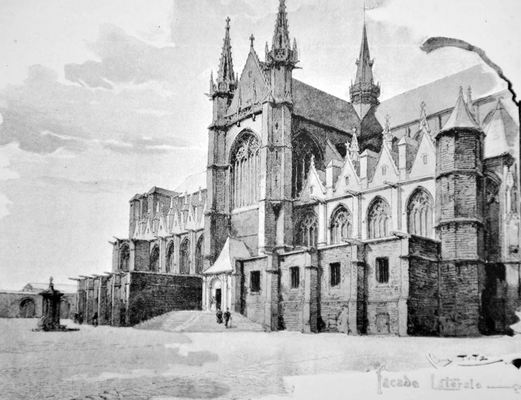 Basècles is part of the community of Beloeil, which is primarily known for its imposing castle with its splendid park, including water features and a forested area. The Castle is owned by the noble de Ligne family. The castle is open to visitors who can discover an historic interior and a fine art collection.

Lovers of nature ought to make their way to the Mer de Sable in nearby Stambruges.

Here they will find a drained lake that’s now a sandy plain hemmed in by marshes and peat bogs. Several signposted trails allow you to explore to your heart’s content.

Visit Aubechies to admire the largest-scale reconstruction of prehistoric Belgium. Here you will discover how the Gauls and the Gallo-Romans lived and how the Romans forged their swords.

Other local attractions include Attre Castle (18th century) and the medieval Hôpital Notre-Dame à la Rose (1242) in Lessines. Basècles is not far from the city of Bergen (Mons). Discover its Grote Markt (market square), the Belfort (belfry) and the Church of Sainte-Waudru. 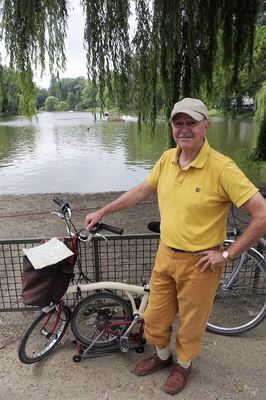 Basècles (Beloeil) is 75km from Brussels by road. Take the E19 towards Charleroi, leaving at exit 21 for the E429 towards Lille (France). Leave this road at exit 30 and take the N56 towards Rebaix/Ath, then towards Sainte-Anne and Beloeil.

Using public transport, you take the train from Doornik to Blaton railway station. From there, the bus (route 86A) will take you to Basècles in an hour or so.

You can explore the area around Basècles by bike. There are 1,600 kilometres of cycle tracks, all connected through the cycle node network. One of the local Tourist Offices will supply you with a map.

All you need to do is jot down the numbers of the nodes along your chosen route. Further cycle tracks, kilometres long, are found on former towpaths and railway lines.

If you prefer hiking you have the choice of over 60 signposted walks along the River Scheldt, across the hills and the forests or through the villages. There are plenty of themed walks to choose from, taking in everything from nature and wildlife to ancient artisan trades.

You could pay a visit to nearby Bernissart, where skeletons of prehistoric iguanodons were found in a mine shaft. One authentic skeleton is on display.

Basècles is no more than a stone’s throw away from Doornik (Tournai). Explore the historic centre of one of the oldest cities in Belgium with its linen hall, the medieval Pont des Trous and the unique Cathedral, protected as part of UNESCO World Heritage. However, the Cathedral is currently undergoing extensive renovations. 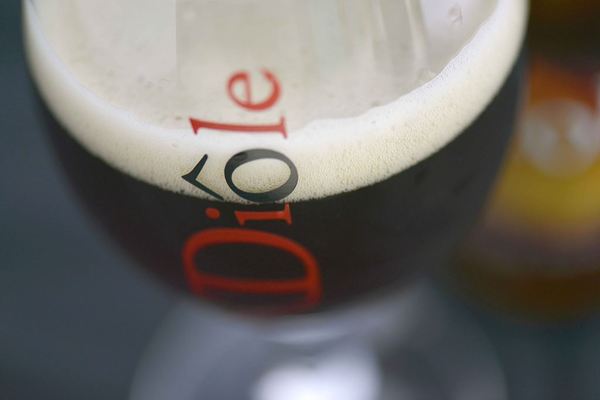 Basècles lies at the heart of a rural area where the idea of terroir is very much alive. You will find all kinds of seasonal products in the open-air markets held in towns and villages, and regional dishes in traditional taverns and small restaurants.

Cheese affineur Jacquy Cange from nearby Stambruges rinses his cheeses in beer. He uses the taste of the beer as a starting point and then selects the cheese to go with it.

The Diôle beers from Brasserie des Carrières, brewed using locally grown barley and malt, make great pairings with a range of regional products and dishes. You can find dishes prepared with Diôle and discover beer pairings in Taverne Le Margotin in Basècles; in the cosy Taverne Saint-Géry in Aubechies; and in the gastronomic restaurants La Cinquième Saison in Bergen and L’Epicerie in Doornik.