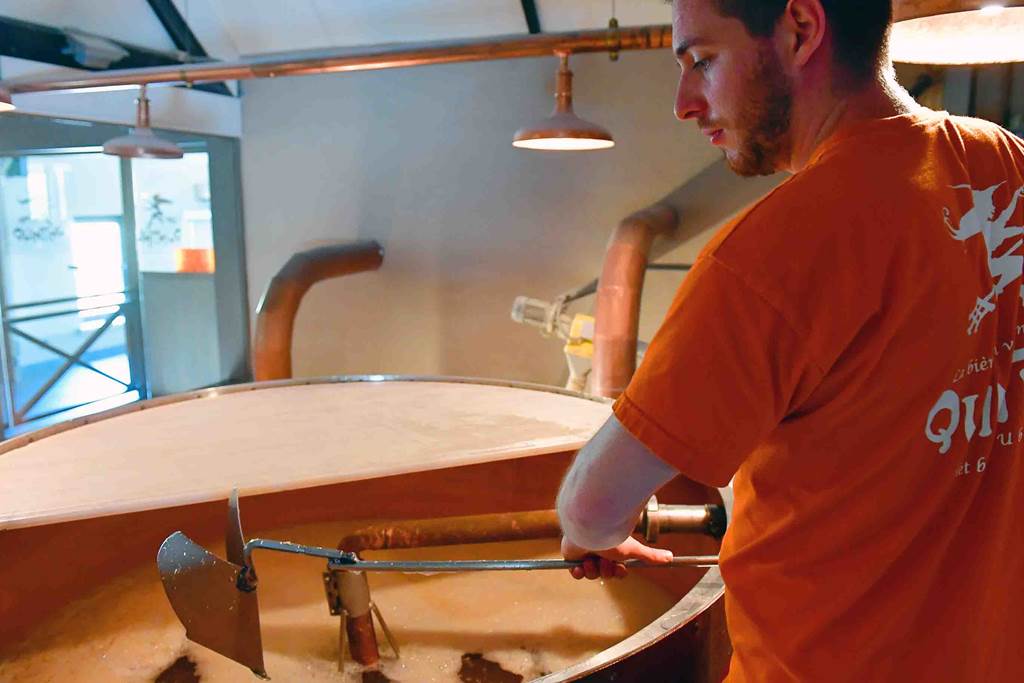 In 1997 Pierre and Vinciane Delcoigne purchased Irchonwelz, a 12th-century castle, with the intention of starting a brewery on the premises. It took two years to restore the building, but in August 2017 their Gouyasse – local dialect for the giant Goliath – was flowing from the tanks.

Brasserie des Géants (Brewery of the Giants) was named after the annual parade of seven model giants at the Ducasse d’Ath festival just down the road.

In 2006 Pierre and Vinciane took over the nearby Brasserie Ellezelloise, a brewery located in the picturesque Pays des Collines, from Philippe Gérard. The two breweries were merged into one: Brasserie des Légendes.

The name wasn’t designed by any marketing focus group. The village of Ellezelles is also overflowing with legends. The annual Witches’ Sabbath in June is a reminder of the so-called witches who were burned at the stake in this village.

Quintine was one of the women who suffered this fate, in 1610, but she lives on in the ‘witches’ beer’ that carries her name and closes with a characteristic flip top. Hercule Stout is named after Hercule Poirot, the character from the Agatha Christie detective novels, whose roots are said to lie in Ellezelles.

‘It is said’ and ‘it is believed…’ are phrases that you come across a lot in these parts. However, it is certainly a fact that Pierre Delcoigne, a farmer’s son, wants people to appreciate the agricultural products of his home acres. He brews with untreated barley from his own fields that is shipped to Beloeil – just south of Ath - to be malted.

His beers are typified by a quite hoppy character married to a full body.

They can be considered ‘terroir beers’, brewed with ground water, house yeast, malt, and hops without any additives. They all re-ferment in the bottle without additional sugar.

The brewery HQ is in Irchonwelz, and it’s here that the majority of beers are produced.

The owners recently invested in a brand new bottling plant and brew hall as well as in logistics equipment. Quintine beer is brewed in Ellezelles but bottled at the castle.

Brasserie des Légendes produces around 1.6 million litres of beer per annum, and the recent investments mean that a higher share of this production is destined for export. 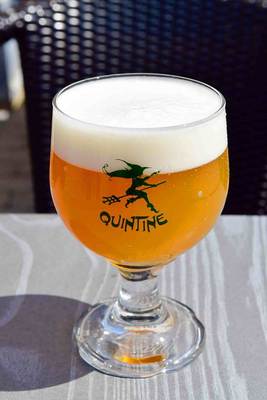 For brewer Pierre Delcoigne, ‘terroir’ and ‘short chain’ are far more than empty slogans. For example, he brews with home-grown barley from Beauregard, his family farm in the Pays des Collines, the Belgian “Hill Country” of low, rolling peaks that rise to just 157 metres. This brewing barley is turned into a range of malts (roasted, caramelised, smoked and so on) at nearby Beloeil maltings. No colourants or preserving agents are added.

Brasserie des Légendes brews with hops from Poperinge, just about an hour’s drive away, and Slovenia, using mineral-rich ground water, for a production process that takes between five and six weeks.

All of the brews from Brasserie des Légendes are top-fermented beers that re-ferment in the bottle. The main fermentation takes about five days. The characteristic aromas develop during that stage.

The beer then spends between 15 and 20 days in cold storage tanks at a temperature of 1°C. Prior to bottling, dry yeast is added once more.

Subsequently the bottles will rest in the warm room at 25°C for several days to re-ferment and develop their natural fizz. Re-fermentation also gives the beer a longer life and ensures it develops further complexity of flavour. 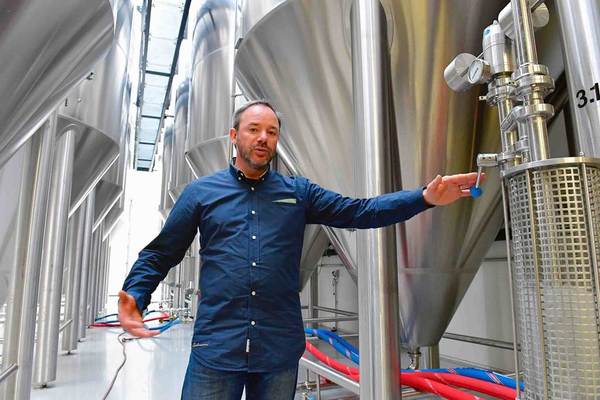 Pierre Delcoigne is a qualified agricultural engineer. He chose this direction of study intending to take over his father’s 60-hectare farm. And since 2012 he has been in charge of that farm as well as the two breweries, honouring his place as a sixth-generation farmer.

This heritage shows in the care with which everything, including the Casanova brewing yeast the brewery uses, is cultivated sustainably and to exacting quality standards. After his studies Pierre trained as a brewing engineer, sharing the lab bench with Grégory Verhelst of Brasserie de Rulles.

Pierre is justifiably proud of his origins, his region, and its products. Local folklore is a tangible link between both of his breweries and their beers, reinforced by the medieval castle that serves as the company headquarters.

This is a brewer with a strong regional and personal identity. Goliath, an eminently quaffable beer, has turned into a favourite in Ath, the ‘city of giants’.

Quintine, a degustation beer full of character, is popular with the numerous walkers and cyclists who flock to the Pays des Collines.

Brasserie des Légendes is represented by fully fermented, fairly dry beers. Armed with his new brew hall, Pierre can produce up to three brews of between 4,000 and 6,000 litres every day. 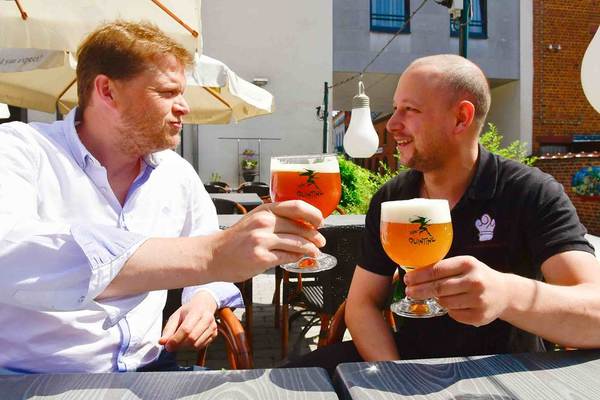 Brasserie des Légendes has two production facilities, 20 kilometres apart. Surrounded by green, the Ellezelles brewery nestles in the heart of the Pays des Collines, a paradise for walkers and cyclists, who can add some local cuisine to their trip with a snack in the brewery tavern and a tasting of the beers brewed in Ellezelles and Irchonwelz.

The Maison du Pays des Collines is a great starting point for hikes and bike trips in this national nature park. This visitor centre is packed with information on the history and landscape of this area, and its unique local folklore.

Walkers should pick up a map of the local network of walking trails – a full 350km that are linked by numbered nodes. Most of the brewery’s beers are brewed in Irchonwelz where you’ll find a traditional brewery housed in a medieval castle.

The building has been exceptionally well preserved and features a roof of rugged red tiles on top of robust surrounding walls with a large gate that would be tall enough for Goliath.

Inside the brewery the wood-clad, cast iron mashing kettle from 1890 and the imposingly tall boiling kettle, made from copper and dating back to 1930 form a great contrast to the brand-new brew hall.

Your guided tour will cover not just the brewing process in which the brewer transforms locally grown brewing barley, but also the brewery’s deep, deep local roots.

The name of Brasserie des Légendes was inspired by a rich local folklore.

The Ducasse d’Ath has been recognised by UNESCO as Intangible Cultural Heritage.

If you want to catch this parade, with its 15th-century religious roots (it’s a much more secular fun festival these days) then plan your trip for the fourth weekend in August. 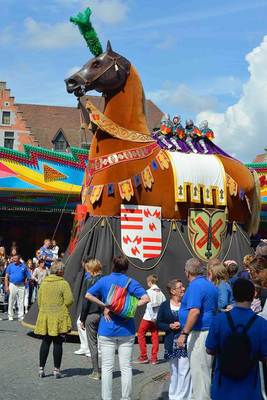 While you’re in the area, Lessines is worth a detour for its splendidly restored medieval hospital. Notre Dame à la Rose and its delightful gardens are now a UNESCO World Heritage site. Ath has a wide array of historic buildings, including the 12th-century Tour Burbant, a military fortification dating back to the Middle Ages.

The Maison des Géants, in its historic mansion, houses a museum explaining the rich folklore of this area – there is a giant around every corner.

At L’ Espace Gallo-Romain you travel back in time to the later days of the Roman Empire. Ath also gives access to the signposted Voie Romaine, the ancient road between Bavay and Velzeke (85km) that connects the archaeological sites of Bavay, Ath, Aubechies and Velzeke.

The Pays des Collines that surrounds Ellezelles rises between the flat plains to the south of Brussels and Tournai to the west.

Ellezelles has become known as the witches’ village. There is no ignoring them. The witches are everywhere, including on the Quintine label. And, every year since 1972 they have really come to life at the village’s Witches’ Sabbath.

Where does this obsession with witches come from? It goes back to 1610 when five so-called witches were burned at the stake at the village square.

In June every year you will find witches, devils playing the violin, comedians, werewolves and other rabble roaming the streets and squares, before at nightfall they dance with Lucifer.

Catch a witch accompanied by loud banging of the drums and… if you want to find out how it ends, you must come along!

We’ve decided to wait and see instead of awakening evil spirits with this guide. 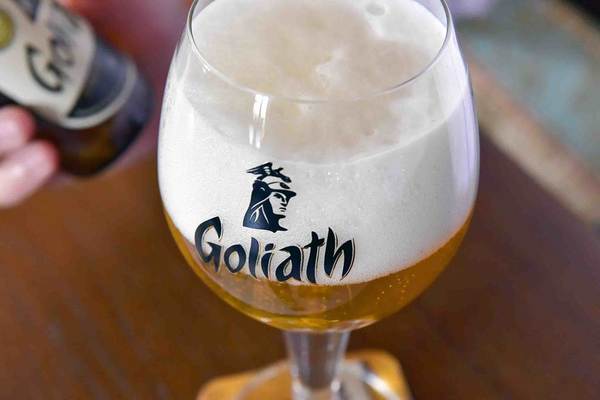 Irchonwelz is an hour’s drive from Brussels. Take the E429 towards Tournai, and leave at exit 27 for Marcq, and continue on to Irchonwelz via Ath.

By train, it takes 50 minutes from Brussels to Ath railway station, from where you take bus 81 to Irchonwelz; a 15-minute ride.

It takes around one hour to drive from Brussels to Ellezelles via the E19 towards Mons, turning off for the E429 to Tournai leaving that at exit 29 for Lessines. Then continue via Lessines, Ogy and Flobecq.

By train from Brussels catch a train to Ronse where you board bus 87 (a 20-minute ride). The entire trip takes around 2 hours.

Cyclists are spoiled with themed routes such as the beer and folklore-flavoured “A vélo entre bières et légendes au Pays des Collines” of 27km with superb views of the nature park.

You can look forward to rows of pollarded willows, picturesque buildings and meandering roads as you cycle past the windmills of Tordoir and Moufflu and the Cat Sauvage windmill.

And don’t forget to make time for a pit stop in the tavern of Brasserie des Légendes in Ellezelles. 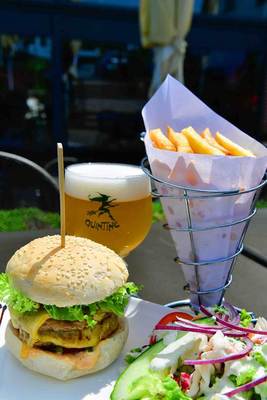 How about a lunch with croquettes of gruyere cheese and bacon and grey snails in herb butter followed by a salad with tender veal loin. Or a stew paired with the appropriate beer in the brewery tavern at Ellezelles? Beer and cheese never fail to make a fine pairing and cheese affineur (ager or finisher) Jacquy Cange is well known throughout the region.

He makes sure that his cheeses mature under perfect conditions and offers them to his customers only when they are just à point.

Creative affinage means developing your own cheeses: fill them with a strawberry, tomato and truffle paste or rinse them in beer. Hainaut also has plenty to offer to sweet-toothed customers.

At the Ducasse in Ath the Gouyasse tarte à maste joins the parade. This cake, baked in honour of Goliath (Gouyasse), is made with a type of dry bread called mastellen plus almonds and raisins.