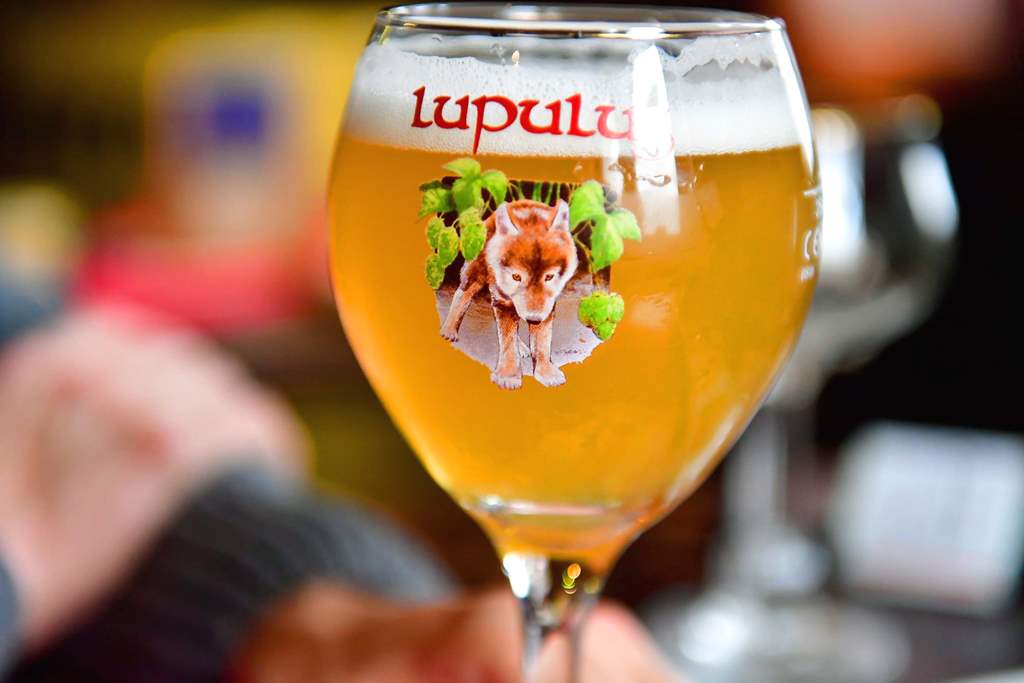 The Beginning – Brasserie Lupulus was founded in 2004 in an 18th-century Ardennes farmhouse by Pierre Gobron and Chris Bauweraerts. The brewers’ original goal was just to supply a local restaurant with beer. However, the brewery gradually grew and the restaurant closed down.

Brewer and bio-engineer Pierre Gobron has earned his spurs in the beer world. In 1982 he set up Brasserie d’Achouffe in partnership with his then brother-in-law, Chris Bauweraerts.

Brasserie d’Achouffe was bought by Duvel-Moortgat in 2006, whereupon Pierre took his leave of the new owners to create his own brewery, Brasserie Lupulus, with the assistance of his sons Julien and Tim.

In 2007 their Lupulus Blond entered the market. This hoppy blond beer is seasoned with thyme and comes in large champagne-style bottles and on tap.

The brewery’s home, Les 3 Fourquets, produces beers with a refreshingly new palette of aromas and tastes that still bear the mark of Belgian brewing traditions.

The Lupulus name pays homage to the hop plant (humulus lupulus), and also refers to the wolves that used to roam the forests of the Ardennes. The wolf’s head on the label was designed by Jean-Claude Servais, an illustrator specialising in nature drawings.

It didn’t take long for Lupulus to be considered an international reference among Belgian specialty beers.

Lupulus beers are now sold in Italy, France and many other countries, but also have a strong presence at home in Belgium.

The Lupulus family has been extended with Lupulus Brune, Hibernatus (a winter beer), Organicus (brewed organically) and Hopera (an IPA).

The brewery is prepared for growth with a brand new brewhall now to produce 8,000,000 litres every year. 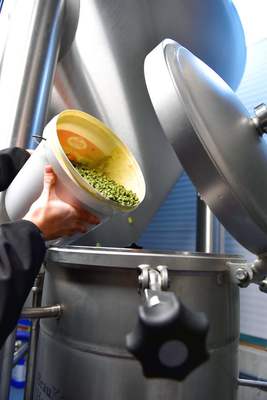 Head brewer Pierre Gobron brews his Lupulus beers in a traditional manner. As part of the mashing, or maischen, process malt is added to the brewing water – at 62°C - in the mashing basin.

The water is gradually heated up to 78°C to ensure the grains release their starch, which is converted into sugar by enzymes.

The liquid wort is then transferred to a filtration basin and, in the next stage, is boiled together with hops, sugar, and herbs and spices before it is cooled down and is ready to ferment.

The beer’s main fermentation occurs at a temperature of around 22°C and takes five to six days.

The beer will then spend one month at about 2°C in cold storage, where it will clarify completely.

More sugar and fresh yeast is added prior to bottling. Then it is moved to the warm room where it will re-ferment for three weeks at 20°C.

As it moves through this part of the brewing process the brew takes on a beautiful sparkle and develops a robust head as well as complex aromas and tastes. Moreover, the re-fermentation prolongs the life of the beer. 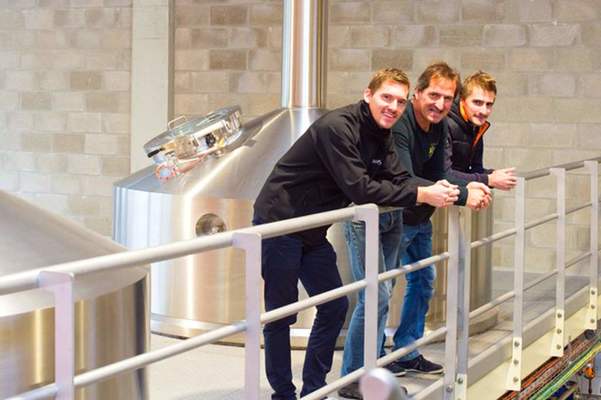 Pierre Gobron has an excellent reputation in the Belgian beer world; earned with proven expertise and great commitment. Pierre is a man of few words and does not like to blow his own trumpet. But there’s no doubt that he continues to strive to improve his beers, spending plenty of time on development and forever searching for better and more efficient ways to achieve the best result. Pierre believes that it takes a minimum of five years to perfect a new beer.

His perfect partnership with Chris Bauweraerts at Brasserie d’Achouffe lasted for a quarter of a century. They had an agreement: “Chris must sell what I brew and I must brew what Chris sells,” Pierre explains. Now his sons Jules and Tim lend a helping hand at Brasserie Lupulus.

Pierre’s product-focused attitude paired with the enthusiasm displayed by the ‘young wolves’ forms an unbeatable combination. And inside this farmhouse in a typical Ardennes village a hi-tech brewery is growing. It is the culmination of the ambition of a highly driven brewer who, having written one success story, prepared straight away for the next chapter. Once a brewer, always a brewer. 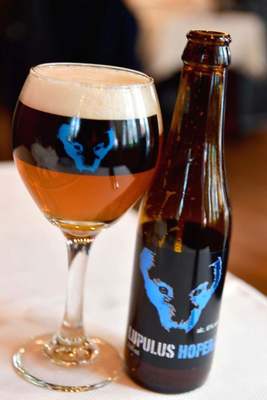 As you approach Brasserie Lupulus, a modern brewery comes into view, seamlessly integrated with a traditional Ardennes farmhouse in the midst of a village.

The brewery tour explains the entire brewing process, from selecting the hops, malt and yeast all the way through to bottling, when the beer is still developing, re-fermenting in the bottle.

The guide talks about the wolves – canis lupus - who used to roam the Ardennes, gives you the Latin name for the hop plant: humulus lupulus, and the name of these beers suddenly makes sense.

Guided tours are available by prior arrangement for groups of 10 and more. They all finish with a tasting.

A visit to the brewery makes a perfect pairing with a hike or bike trip, although cycling in the area is only for the advanced!

Hiking routes around Gouvy vary between 3km and 16km in length, and the tourist office will supply the maps.

It takes an experienced cyclist to brave the hills of the Ardennes. The area is popular with mountain bikers, particularly the village of Houffalize, close to Gouvy, which is a regular competition venue.

In case of inclement weather, you can descend into the Caves of Hotton with its giant galleries, curtains, imposing stalagmites and stalactites and the rumbling river far below. 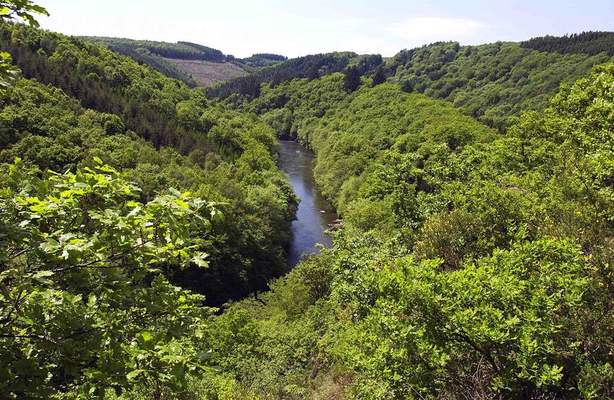 The Ardennes are the perfect destination for a day trip, a weekend adventure, or an entire week away from it all. If you love vast forests you can roam to your heart’s content.

The ‘pearl of the Ardennes’ is La Roche with its castle and the Museum of the Battle of the Ardennes. It is also where the river Ourthe has drawn its most beautiful meanders. From the slopes of Deister rock, the castle towers over this small city.

The best views of the Ourthe can be had in and around the village of Nadrin, especially if you take a walk in the ‘hauteurs et gorges de l’Ourthe’ region celebrating the ‘heights and gorges’ of this lovely river.

From the Belvédère of the Five Ourthes in Nadrin you are rewarded with exceptional views of the river. Go right back to the source and replenish yourself in the land of the Amblève and the Ourthe. An amazing trail takes visitors from the Fonds des Quarreux, passing by the Grotte de l’Abîme, Spa, and Franchimont towards Stavelot.

The small town of Saint-Hubert is dominated by forests and a love of the hunt. Towards the south the river Semois appears and disappears in a maze of meanders. The river leads to Bouillon, Botassart, Dohan and Frahan.

It takes 2 hours to get from Brussels to Gouvy by car. Take the E40 towards Liège followed by the E25 towards Luxembourg, leaving at exit 51 for Gouvy and Houffalize.

Brussels to Gouvy by train takes around 2 hours and 15 minutes with a change at Liège. From Gouvy railway station, bus 142 takes you to the brewery in 15 minutes.

The Baraque de Fraiture attracts many hikers and winter sports aficionados. It is great for downhill and cross-country skiing.

Children will enjoy Barvaux Labyrinth where you could easily spend three to four hours walking around, trying to find your way in or out of the various mazes.

The star-shaped Mardasson Memorial (1950) in Bastogne pays homage to more than 77,000 American soldiers who lost their lives at the Battle of the Ardennes in their fight to liberate Europe.

Durbuy proudly claims the title of ‘smallest city in the world’. This little city, located on a bend of the Ourthe, is well worth visiting thanks to its castle; the Maison Espagnole, a timbered house where taxes used to be collected, and the splendid city centre with its 18th-century houses. Enjoy a stroll in the pedestrianised streets or along the banks of the river. 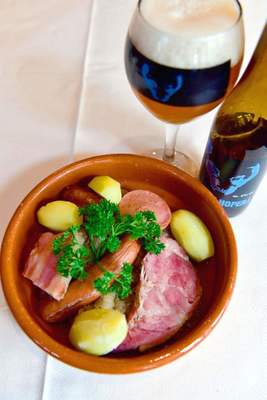 Lupulus Blonde is a golden-coloured, hoppy, unfiltered Ardennes tripel that re-ferments both in the bottle and in the barrel - it is fresh and fruity. Just like the other Lupulus beers, it makes a great pairing with many typical Ardennes products and dishes.

Think of Ardennes ham, smoked or not, however you prefer it. These dried hams are glazed with a mixture of lard, olive oil and pepper. Game is another local specialty during the hunting season, roe deer or wild boar for example. These meats are often served with wild fungi: ceps, chanterelles or hedgehog mushrooms.

Wild trout is rare these days but the fish is now farmed commercially, and often served smoked after drying. If you have a sweet tooth, the Ardennes has plenty to offer. Taste the creations of artisan chocolatiers, patissiers and jam makers.

This strong Belgian blue cheese is left to mature in an old slate quarry - scailton is the old Ardennes term for a slate miner. The history of this region shines through in its produce.