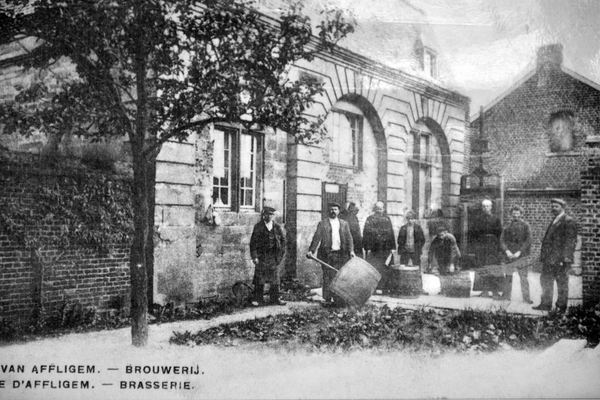 In 1064 six ‘converted’ soldiers who used to serve the Count of Leuven founded the abbey of Affligem. In 1085 they adopted the Rule of Saint Benedict, “pray and work”, and chose Fulgentius, a monk of Saint-Vanne Abbey in Verdun originally from Frasnes-lez-Gosselies, to be their first abbot.

Affligem developed quite quickly into one of the most important abbeys in the Duchy of Brabant, as much of modern Belgium was then called.

Over the centuries the abbey has had to bear its fair share of bad luck. Damage inflicted in the 14th century by the troops of the Count of Flanders was followed by the total destruction of the abbey by soldiers of William of Orange in 1580. Each time the abbey and its brewery were rebuilt.

In those days the brewery was situated near the Kamgracht and the fish ponds, at a lower altitude than it is today.

In common with many Belgian abbeys, the invasion by French Revolutionary forces from 1794 marked the – temporary – end for this religious community.

It was not until 1870 that monks returned to the abbey and took up agricultural activity once again on the site. A decade later, a neo-gothic wing was added to the abbey and a new church was erected. The brewery was re-opened in 1885 to be followed by a new dairy and cheese farm in the mid-1890s.

The copper fittings and fixtures were requisitioned during the First World War but the brewery managed to resume its activities in 1921. The dairy and the brewery were finally closed, never to re-open, in 1940.

The Affligem abbey beers have been produced since 1970 by the De Smet brewery in Opwijk, which by then had changed its name to Affligem Brouwerij.

This brewery had made its name in the local region with its Op-Ale amber beer, introduced in 1935. Besides the Affligem Blond, Dubbel and Tripel there are the seasonal beers, Affligem Patersvat and Cuvée. All of these beers re-ferment in the bottle.

The Affligem Brewery produces around 25 million litres per annum, 80 per cent of which is destined for export. Although the monks are no longer involved in brewing, they guard ‘their’ recipe and ‘their’ brand. A proportion of the proceeds from sales goes towards supporting the abbey and its charitable works. 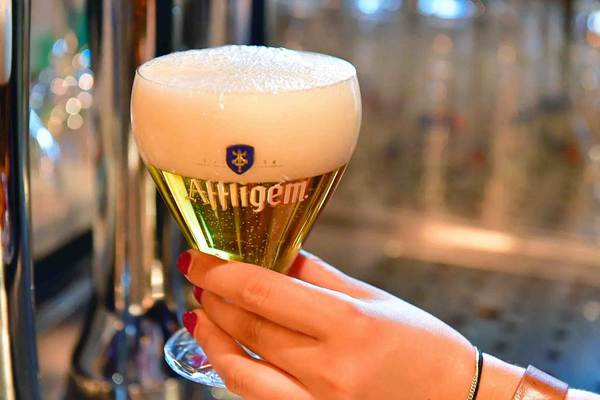 For its abbey beers, Affligem Brouwerij draws inspiration from the original recipe created by the abbey, now tweaked to work with modern brewing techniques: the Formula Antiqua Renovata. Quality is paramount, and only the very best ingredients are used.

Beers are brewed with a high quality summer barley malt, and an oast malt that has been dried on the floor of the oast house and contributes rounded aromas.

The brewer uses only European aroma hops, including Savinsjki Golding and Spalter Select. The hops are added at both the start and the end of the boiling process to guarantee a fine hop balance.

Even to this day, the blonde Christmas beer, Affligem Patersvat, is brewed using fresh hop bells gathered in the first harvest.

The increased proportion of hops provides a floral character, complemented by a hint of freshly mown grass in the flavour. Freshly picked herbs from the abbey gardens are used as well, but only for the Affligem Cuvée spring beer.

But the secret of Affligem lies elsewhere. It is the house yeast, freshly harvested from the top-fermenting beers. This yeast defines the taste profile and thus constitutes the ‘soul’ of the beer. This ‘soul’ is deep and complex. The brewery is still using the same yeast that it did all those years ago when it first started out.

Another important characteristic is that the yeast is freshly harvested time and time again. And all Affligem beers re-ferment in the bottle.

All Affligem abbey beers re-ferment in the bottle, spending 14 days in the warm room so they can mature into complex, layered beers aimed at the connoisseur. Patience is the only way to achieve these results, and all Affligem beers are given ample time to mature and produce their layered character. 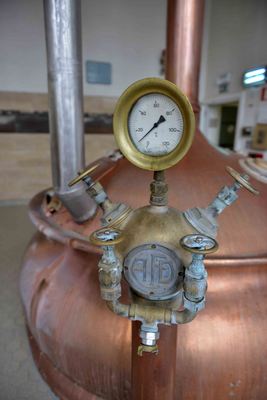 Affligem is in the rich tradition of Belgian abbey beers. They are exceptionally pure beers, brewed on the basis of an authentic, protected abbey recipe. Quality takes time. In the brewery the beer is given all the space it needs to complete its fermentation.

This explains the dry character of the Affligem Tripel, to take just one example. Brewer, Wouter Hollevoet, emphasizes the care that is given to the degustation beers. ‘Degustation’ here could well be taken in the literal sense of tasting or sampling.

The classic chalice was recently given a facelift. Its replacement is a sober but elegant, conical drinking vessel on a tall stem with a minimalistic look.

What is striking about the new chalice shape is that it narrows towards the top, enhancing the aromas and making the froth stand up for longer.

The brewer wants you to take your time to taste these complex beers. This is why the new glass is accompanied by a premium tray that includes a special yeast glass.

When the beer is poured into the glass, a yeast sediment lurks at the bottom of the bottle. It is up to you whether you want to taste the beer with the yeast poured out into the same glass or to have the vitamin-rich sediment served separately in its own glass. That way you will taste all the different aspects of the ‘soul’ of the beer. 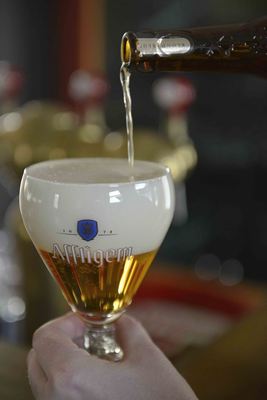 The Affligem brewery is expanding at quite a rate, and so the focus here is on production rather than on a brewery tour. If you do have the opportunity to visit the brewery then an initiation into the secrets of the production of abbey beers awaits you.

Visitors are offered the chance to compare the old brewing hall side-by-side with the new one, from the magic of copper to the efficiency of stainless steel.

This is followed by a crash course in filtration, fermentation, storage and re-fermentation in the warm room. To conclude your visit, a tasting of Affligem abbey beers awaits.

If you want to immerse yourself in the entire Affligem story, we recommend a guided visit of the nearby abbey.

And if you have some more time to spare, you can complete the picture with a walk or bike ride in this green oasis, where you will come across a hop field now and again, a reminder of the heyday of hop cultivation when the road between Asse and Aalst was lined by one hop field after another.

The monks made their mark on this region. When the wonders of the hop became known to 14th century brewers, the monks were quick to plant their own fields.

A trip to Affligem in fits perfectly with a visit to Brussels or Ghent - the brewery and the abbey are located more or less half-way between these two exciting and cultured cities. 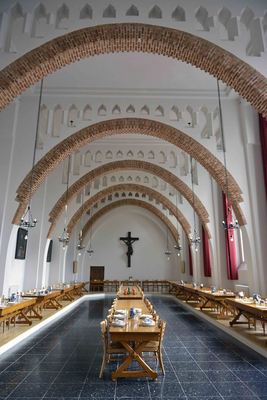 There is plenty to see in and around Affligem. Above all there is the abbey, with its medieval ruins (12th-13th century), the Benedict gate and the reception building (1720), built in the late Baroque style. You can only visit the abbey if you use the services of a tour guide.

Your visit will take in the House of the Bishops, the cloisters, the church, the refectory, the chapter house, the library, the ruins of the abbey church, the herb garden and the Religious Centre.

You will also find an abbey shop with its abbey beer and cheese, fruit wine, arts and crafts… as well as café-restaurant, the Gasthof d' Oude Brouwerij. Here you will also find the archaeological museum displaying a range of objects excavated from the abbey site.

The village of Essene is close by. Here, you can admire the main church, built in the neo-classicist style, with its listed church organ. Essene is also home to the De Montil sculpture garden and the former farm breweries of Bastaertshoeve and Ankerhof.

The village of Hekelgem has put itself on the map with its sand carpets (pictures created in coloured sand strewn onto floors) and tapestries. The tradition is kept alive in the sand carpet museum housed by the old smithy. The beautiful hill of Boekhoutberg is home to two former windmills.

The Kluiskapel chapel was built near a spring. And the Blakmeershoeve comprises the farm buildings that once formed part of Affligem abbey. This farmhouse is now in private hands and has undergone extensive restorations. 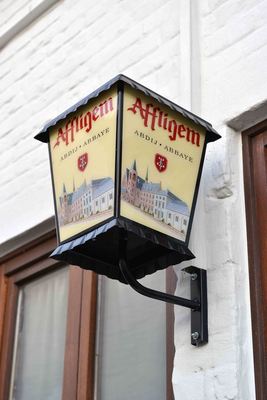 Drive to Affligem on the E40 motorway, leaving at exit 19a (Affligem), followed by the Brusselbaan Aalst to Brussels road. Affligem is easy to reach by train, alighting at the Essene-Lombeek station, or using the Liedekerke or Denderleeuw railway stations.

Various bus routes serve Affligem, look for those travelling to and from Ternat, Asse, Aalst, Brussels, Liedekerke or Meldert.

Affligem is the ‘front garden’ of the undulating Pajottenland, and is located on the threshold of the Faluintjes region.

There is plenty of choice for cyclists too. They can explore the valley of the Dender and the Pajottenland region using the Boerenkrijgroute (45km), the Land van Asseroute (39km) or the national Dender-Waasland cycle route or 'fietsroute'. Affligem is also the starting point for the Hoppetocht (34km), which takes riders through the hop fields. 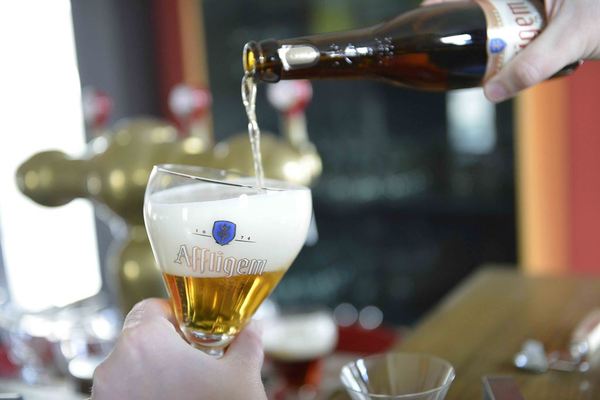 In common with many abbeys, Affligem was also a significant Belgian cheese producer. The former Pax cheese dairy, located in the abbey grounds, was closed in 1940 and production has been outsourced ever since.

There are two types of Affligem cheese, both of which are semi-hard and slightly salted. There is the round cheese with a brown crust, crafted following the traditional abbey recipe.

The character of the oblong cheese with the golden-yellow crust, fine-tuned by Dom Tobias during the inter-war period, is more pronounced.

Regional products enjoy great popularity in and around Affligem. 'Hopkeesten', the fresh shoots of the hop plant, are considered a delicacy here.

Between mid-March and mid-April you will find them on the menu of renowned regional restaurants, including the well-known beer restaurant, De Heren van Liedekercke, in the nearby village of Liedekerke (Denderleeuw).

Affligem is not far from the Pajottenland and the valley of the Zenne, the traditional birthplace of the Belgian lambic beers, of oude geuze, oude kriek and faro. The entire region surrounding Brussels and Leuven is replete with breweries of all shapes and sizes.

The rich agricultural tradition of the area still supports a variety of regional and seasonal produce, including strawberries, asparagus and chicory grown out in the open. The latter is a particular local delicacy.