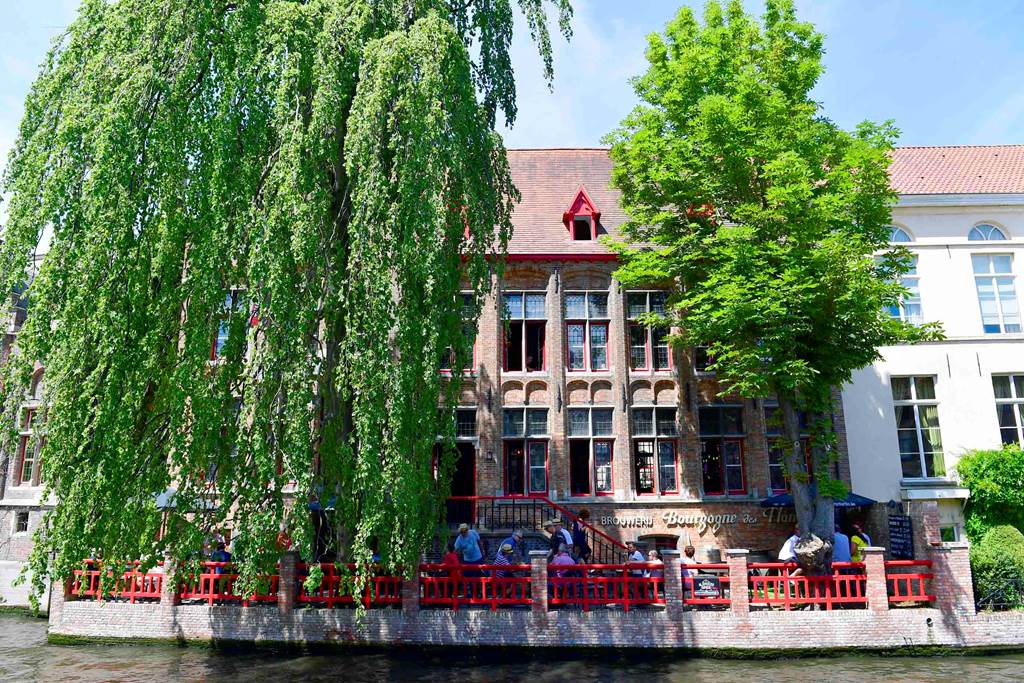 Bourgogne des Flandres can look back on a long tradition in its home city of Bruges. The Van Houtryve family, a city brewing dynasty, owned three breweries around the time of World War One: Den Os, La Marine and Ten Ezele.

The Den Os brewery was particularly well known for its Bourgogne des Flandres.

It may not surprise you to learn that in those days, the “beer city” of Bruges was home to as many as 34 active breweries. Only three real breweries are in operation today.

It was in that golden age, just before the Great War, that the flagship beer of the Den Os brewery was born.

With the Bourgogne des Flandres beer they managed to brew an authentic Flemish red-brown beer that would survive the huge popularity of pils beers after the end of WWI and the devastation brought to Belgium by World War II.

The Den Os brewery was closed down in 1957 - its premises are now occupied by a wine merchant.

However, Bourgogne des Flandres was not lost to posterity. Michel Van Houtryve entrusted breweries outside the city with the recipe and supervised its production himself.

Thus the beer ended up at the Verhaeghe brewery in Vichte.

In the 1980s, the recipe came into the hands of the Timmermans lambic brewery in Itterbeek (Dilbeek), which would later be taken over by Anthony Martin.

At the end of 2015 the beer returned to its Bruges roots. In Kartuizerinnenstraat.

Bourgogne des Flandres is now produced once again in a brand new brewery in its home city.

You can visit the new production facility in a building formerly owned by the Public Service Authority and located barely 50 metres away from the former La Marine brewery and a couple of hundred metres from the central square. 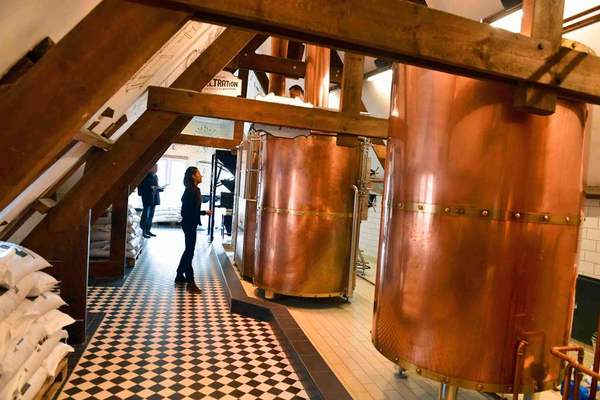 ‘The genuine taste of Bruges’: that’s how Anthony Martin describes his Bourgogne des Flandres. This beer owes its unique aromas and taste to a mixed fermentation process.

In keeping with the ancient Flemish tradition, the brewer blends a young, dark, top-fermented beer with a mature beer: a lambic from Timmermans that has spent several months maturing on oak.

Lambic is brewed in the winter in the Pajottenland region, using recipes that have been passed on by generations of brewers.

This very traditional Belgian beer style contains a minimum of 30% wheat as well as aged hops.

Instead of adding yeast, the brewer allows nature to do its work.

After brewing the wort cools down in a large, open cooling basin or koelschip.

During this cooling-down period the wort comes into contact with the local microflora.

These wild yeasts of the Brettanomyces family (called Bretts by the brewers and wine makers who use them) are particular to the Zenne valley, producing a distinctive flavour. They prompt spontaneous fermentation.

The entire fermentation and maturation process takes between two and three years.

Bourgogne des Flandres belongs to the category of ‘cut’ or blended beers that are typical of West Flanders and the Oudenaarde region.

Just think of the Flemish red-brown beers of the Rodenbach type.

These blended beers are characterised by their use of traditional lambics produced in the Zenne Valley on the outskirts of Brussels. 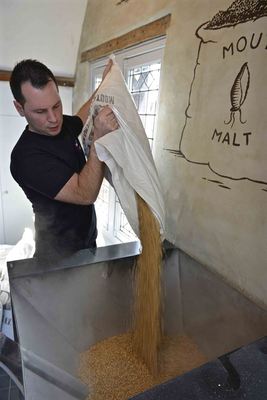 Anthony Martin, the owner of Brouwerij John Martin NV, is advised by his brewmaster Willem Van Herreweghen, who used to brew for Palm Belgian Craft Brewers before making his mark as an expert in the field of lambic beers.

He taught Thomas Vandelanotte, a young brewer who had worked for Timmermans for a number of years, and Edward Martin, the son of Anthony Martin, how to produce a lambic.

In the new Bourgogne des Flandres brewery, Thomas Vandelanotte will be in charge of production.

Thomas was born and raised in Bruges and learned his trade at the Timmermans brewery.

Together with Willem he also brewed in the Ferme de Mont St Jean where the John Martin Waterloo beers are created.

Visitors will be pleased to learn that at Bourgogne des Flandres you will see the brewers at work. Thomas himself welcomes you on a large screen in the brewhall. And both Thomas and Edward are very approachable and love talking about their craft.

Or you could create your own personal Bourgogne des Flandres brew as part of a workshop under the knowledgeable supervision of one of the beer connoisseurs at this brewery. 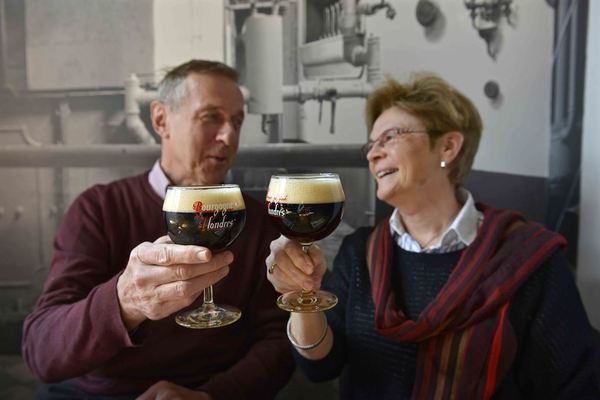 The Bruges brewery world is much enriched by Bourgogne des Flandres. The building stands in the heart of Bruges, a new landmark for boat tripping tourists on the city’s famous canals or reien.

You will float past the terrace of the brewery restaurant as you approach Den Dyver.

The main entrance is just around the corner, in Kartuizerinnenstraat.

Bourgogne des Flandres is brewed in a brand new brewery housed in an historic building.

There is a tour starting every ten minutes between 10 a.m. and 5.20 p.m. You can just check-in at the entrance or you can book your ticket online in advance.

There is also a lift which means the brewery is accessible to wheelchair users, the elderly or infirm. A visit provides an excellent opportunity to discover the history of this typically Bruges beer.

In the loft you can smell malt and freshly picked hops as the beer is brewed in front of your eyes.

From behind a glass wall you see the wort fermenting in the open cooling basin.

In the interactive areas you’ll learn how to tap a beer the digital way and produce selfies that you can email to friends and family. You can also have your selfie printed on the label of the bottle that you take home afterwards.

Parts of the building afford a splendid panorama of the Venice of the North, the city’s famous belfry in particular.

The tour takes around 45 minutes and includes a video presentation that explains the history of Bourgogne des Flandres.

You’ll see treasures from the archives, including invoices from breweries long lost to history.

Discover the ingredients used in making beer, and admire vintage brewing equipment. You will also see the brewers at work. Don’t forget to taste the beer afterwards, or enjoy it with a meal in the brewery’s own restaurant. 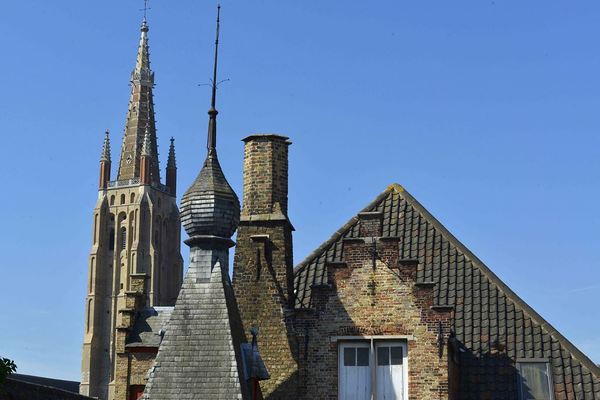 The first cottage, number one, has been converted into a museum.

Here you’ll discover how the beguines used to live in this semi-religious female community.

Boat trips on the canals of Bruges or a horse-drawn carriage ride around the city are experiences not to be missed.

The same applies to a climb of the Belfort tower, with splendid panoramas from the top.

The impressive Markt, or market square, at the foot of the Belfort, is the heart of the city.

In the Historium you can re-live the golden age of the Burgundians with seven themed rooms, and lots of videos and visual effects.

At Burg Square you find the Holy Blood Basilica, a beautiful Catholic chapel. At the Groeningemuseum you can admire the work of the late medieval artists known as the 'Flemish Primitives’ including Jan Van Eyck and Hans Memling.

The Sint-Janshospitaal is a medieval hospital. Admire the ornate tombs of Mary of Burgundy and Charles the Bold and Michelangelo’s Madonna and Child in the Onze-Lieve-Vrouwekerk with its majestic brick tower – all 115.5 metres of it.

Once you have come back to earth, visit the Concertgebouw, the concert hall known for its excellent acoustics.

Tip: go off the beaten track and absorb the peace and quiet. Has time stood still in this city? It almost seems like it. 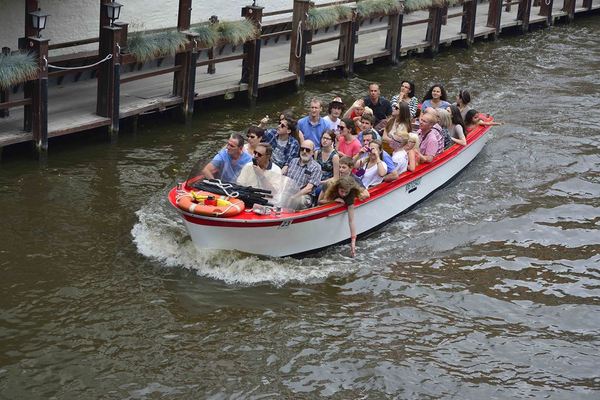 Bruges is in the west of Belgium, one hour’s drive from Brussels and Antwerp and 20-minutes away from the City of Art, Ostend. By rail, the journey from Brussels takes 90 minutes. Change in Ghent for the Ostend line.

From Bruges railway station the city centre can be reached on foot. By bus (number 12) it takes a quarter-of-an-hour.

The city is an excellent base from which to explore the polders, as land reclaimed from the sea is called.

The small medieval city of Damme is 13 kilometres away and can be easily reached by bike along the picturesque Damse Vaart canal.

Between 1 April and 30 September a passenger ferry, the Lamme Goedzak paddle steamer, will take you from Bruges to Damme.

The Meersen walking trail will take you through the Assebroekse Meersen. This nature reserve covering 420 hectares lies between Bruges, Beernem and Oostkamp.

Tips: Combine your visit to Bruges with a trip to the seaside. Take your bike or rent one and admire the scenery. 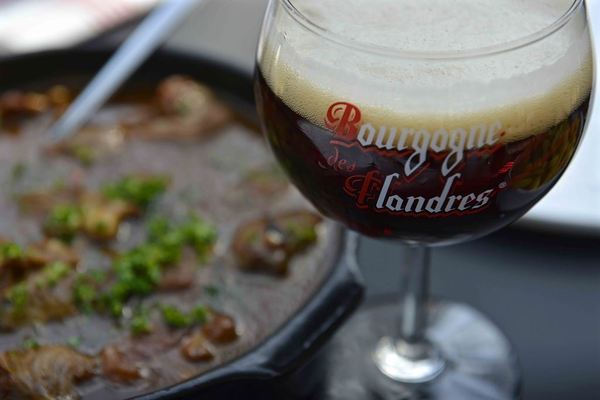 To call Bruges a culinary hotspot is an understatement. This city boasts two renowned hotel schools, Spermalie and Ter Groen Poorte, and has generated culinary talent on a world-wide scale.

Bruges has around half a dozen Michelin-starred restaurants. More than 30 chefs from Bruges are recommended by Michelin, Gault Millau and Bib Gourmand.

Burgundian Belgians and foodie tourists alike are spoiled for choice. Visitors to Bruges often make their restaurant reservations before they choose their hotel.

Chocoholics can melt away at the sight of more than 50 chocolate shops and chocolatiers’ workshops.

Dominique Persoone, Bruges born and bred, is without a doubt the most famous of them all and a regular supplier to several starred restaurants.

This is a chocolatier who enjoys a challenge.

His shop somewhere to go for classics, but also single-origin chocolates replete with aromas of tobacco leaves, rum and cognac, wasabi, chilli, oysters, cauliflower and even freshly mown grass…Just ask him which of his creations best suits a Bourgogne des Flandres and prepare to be amazed.

This brewery’s restaurant is a great venue to try out some adventurous culinary combinations with its beers. Ask your waiter for advice.