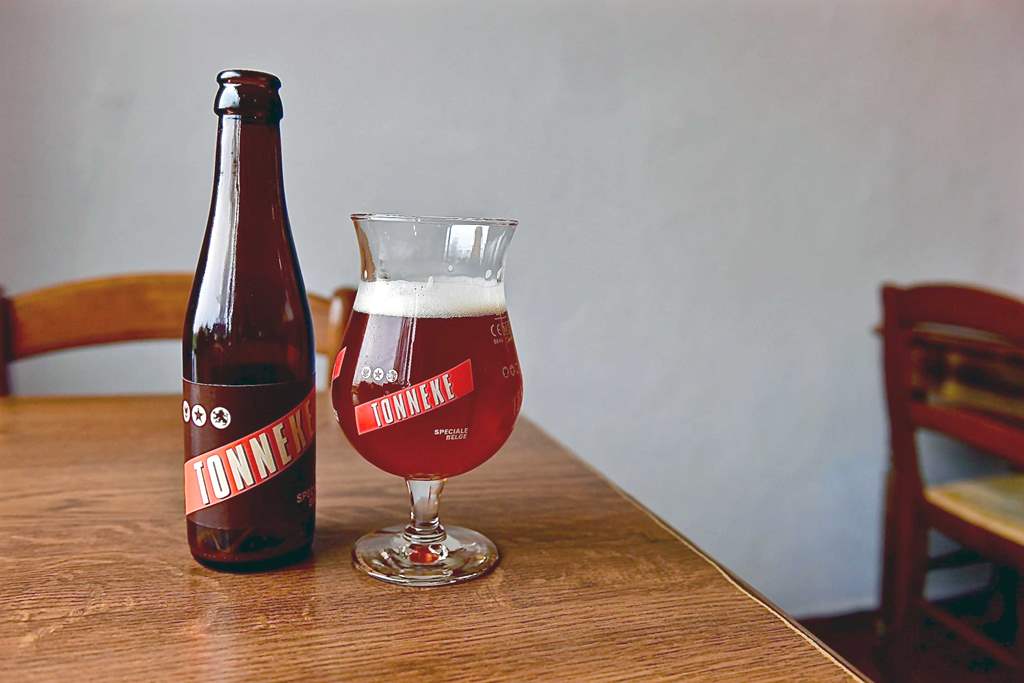 Like many Belgian breweries, the origins of Brouwerij Contreras lie in farming. In 1818 Valère Latte, a farmer/brewer, started his business on the highest ground in the village of Gavere. It is a farm as well as a windmill and a brewery. In 1898 René Contreras acquired the brewery. His surname points at Spanish roots, and the family’s coat of arms proudly displays the regions from which his ancestors came: Castile, Extremadura and Bohemia.

In 1920 René sold the brewery to his nephew Marcel, whose son Willy Contreras was soon to take over the mashing stick. Marcel transformed the brewery into a modern enterprise with new cooling equipment to make it possible to add pils to the range.

Contra Pils and Raf Export entered the market even before the Second World War. And Brouwerij Contreras established its reputation in the region with its Tonneke and Maarts Tonneke.

The latter beer was originally named Special, as it is an amber-coloured, top-fermented beer of the Spéciale Belge type - the style developed by Belgian brewers in response to the success of pils.

Tonneke was initially only available in wooden barrels in an unsaturated version, unlike the traditional tonnekesbier style. Only in later years will the beer be saturated with carbon dioxide and marketed in bottles.

In 2004 Brouwerij Contreras was acquired by Willy’s daughter Ann and her husband Frederik De Vrieze. The brewery was given a thorough make over, and Frederik threw himself into developing the export business.

Besides Tonneke, Contreras now also produces a range of Valeir beers. Valeir is the nickname given to the brave people of Gavere and of Ghent who revolted against the Duke of Burgundy, Philip the Good, at the Battle of Gavere that was fought on 23rd July, 1453.

Valeir Blond was launched in 2004 to be joined by Valeir Donker, Divers (a tripel) and Extra (an IPA). Extra was launched to celebrate the day when the Tour of Flanders cycle race passed through Gavere. 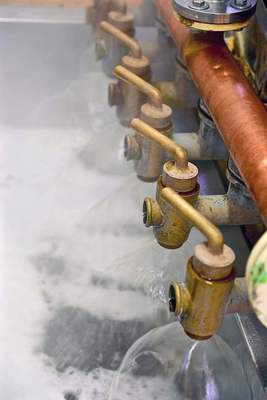 The backbone of these beers is natural spring water from Contreras’ own land. Half of the hops are sourced from Belgium, including Saaz, Hallertau, Styrian Golding and Brewer’s Gold varieties. The brewer chooses from four different types of yeast depending on the beer.

This is a very traditional brewing process. As a first step, the malt is crushed, the husks are removed and the kernels are ground. The malt is then added to the brewing water and blended into a mash that is gradually heated to 78°C to obtain the sweet wort that will feed the yeast at a later stage.

The wort is filtered before it is boiled with the hops for one-and-a-half hours. It cools down to 22°C (for specialty beers) or 14°C (pils) at which point the yeast is added.

The young beer ferments for three to four days to make specialty beers, or up to a week for pils, before it is transferred to the typical cylindroconical tanks in which it sits at 1°C.

Specialty beers are cold-stored for two weeks whereas pils requires four weeks. The beer is filtered once more and is pumped into clarification tanks before being bottled or transferred to barrels. Beers that re-ferment in the bottle will spend another two weeks in a warm room at a temperature of 25°C. 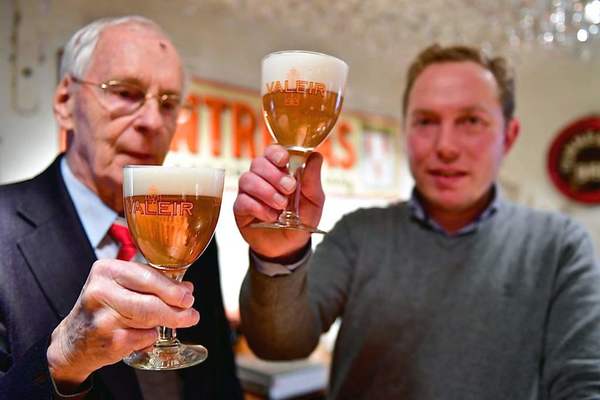 Frederik De Vrieze, an architect by trade, has been brewing with Contreras since 2005, when he took over from his father-in-law Willy Contreras. There is no doubt that the historic brewery building held a lot of appeal for him. But first and foremost, he is a committed producer who focuses on his product 100%.

Since Frederik was handed the mashing stick, a lot of beer has flowed through the tanks. At the time of the handover, production amounted to around 100,000 litres per annum. Ten years on, this figure has quadrupled.

Up to 2004, Contreras mainly produced pils for a small number of cafés owned by the brewery. Ten years on, pils as a proportion of total production has decreased considerably whereas speciality beers are on the up.

Exports have also gained in importance and now account for around 15% of all the beer produced. Major overseas markets include Scandinavia and Japan.

The success of this brewery is rooted in product quality. When Frederik de Vrieze took the helm he was faced with aging equipment. In the years since then he has continued to upgrade his production facilities. The old copper boiling kettles remain in use but Frederik did say goodbye to the open yeast basins. He also replaced the aluminium fermentation and cold storage tanks with stainless steel cylindroconical tanks (CCT); making the brewing process more efficient as well as more hygienic.

So, tradition has been honoured on the other hand, while Frederik has expanded the palette of aromas and tastes on offer with new beer styles, like the IPA, Valeir Extra. 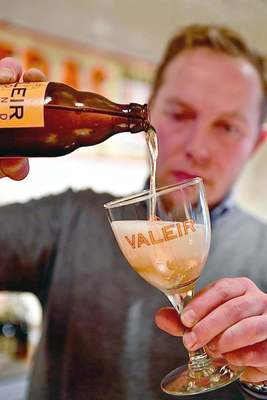 The link with agriculture becomes evident as soon as you arrive at the brewery. You’ll recognise the shape of a classic farmhouse and, all around you are fields.

The completely restored 19th-century copper brewhall is still fully operational but this brewery also uses the latest technology, including a row of cylindroconical tanks for fermentation and cold storage.

The tour explains the brewing process from start to finish and concludes with a degustation in the tasting room, where time appears to have stood still.

Brewery tours are available by prior arrangement only and take around two hours including the tasting session. In the vicinity of the brewery you can visit the ‘village of springs’ of Dikkelvenne and the Semmerzake area with its protected village views.

Gavere is known as the ‘gateway to the Flemish Ardennes’ and offers many opportunities for hiking and biking, for example along the banks of the Scheldt. Pop into the local tourist office to find out about bike hire and to pick up a map.

Leisure cyclists, bike tourists, and serious professional cyclists can all push down the pedals to their hearts’ content on many local signposted routes, the Ronde van Vlaanderen and the Scheldevallei trails to name but two. You can also work out your own cycling tour with the aid of the extensive cycling node network. 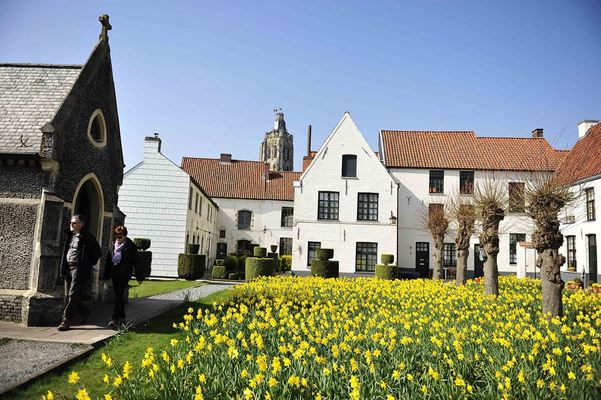 From Gavere the cities of Ghent and Oudenaarde are within easy reach. Ghent enjoys its well-deserved reputation of being one of the best preserved historic cities in the world. Discover its unique medieval city centre with Gravensteen castle and the Patershol quarter, the Sint-Baafskathedraal, home to the world-famous triptych, the Adoration of the Mystic Lamb, painted by the Van Eyck brothers, and its picturesque beguinage.

The medieval belfry just across from the city hall makes its towering presence felt. And Ghent’s medieval harbour comes back to life at Graslei and Korenlei, two quays on opposite sides of the river Leie, while Saint Michael’s Bridge (Sint-Michielsbrug) affords a unique panorama over the medieval skyline.

Culture aficionados are given a warm welcome in the SMAK contemporary art museum, the nearby Museum of Fine Arts and the STAM Museum about the history of the city.

Exploring Ghent from its canals is a very attractive proposition, especially in the evening when the old city centre is lit up beautifully.

Oudenaarde is the beating heart of the pro cycle classic, the Tour of Flanders. Explore its city hall, built in a flamboyantly Gothic style, its belfry, the Sint-Walburgakerk and its beguinage. And the fame of the tapestries once produced in this lovely little city has spread around the world. 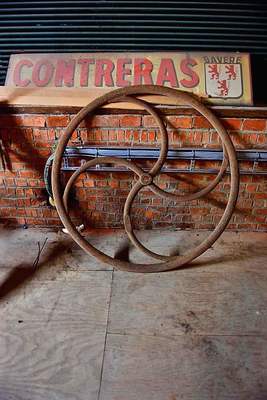 Gavere is an hour’s drive from Brussels. Take the E40 towards Ghent followed by the E17 direction Kortrijk (Courtrai), take exit 8, sign posted for De Pinte, then follow the N60 and the N439 to Gavere Centrum and Molenstraat.

The train journey between Brussels and Gavere takes one-and-a-quarter hours with a change of trains at Gent Sint-Pieters station.

The bus ride to the brewery takes another five minutes. From Ghent, you could take bus lines 48 or 54 to get to the brewery; the ride takes an hour.

The Flemish Ardennes really put the spotlight on local beer culture. There are four cycling loops and three walking loops that connect no fewer than four local breweries, of which Contreras is one. Jump off your bike and recover from your exertions in one of 72 carefully selected cafés along the routes.

Walkers have three circular paths to choose from, and a convivial café is never far away with regional beers on the menu, a cosy atmosphere, and great views.

There are no fewer than 152 junctions or nodes that allow you to mark out your own route, blending nature and landscape, or culture and history in the square between the settlements of Kluisbergen-Oudenaarde-Brakel-Ronse.

Right on the doorstep of the Contreras brewery you will find two signposted walking routes: Asselkouter and Slag bij Gavere. 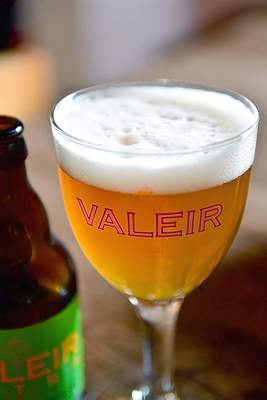 In the Flemish Ardennes and all around the Contreras brewery you will find natural springs. The underground water is naturally filtered by chalky sandstone and sand with a high shingle content. This mineral water is bottled, but also forms the basis of many a regional beer, including Contreras. Their brewing water is pumped up from two nearby wells. And just like the mineral water, their Tonneke Spéciale Belge amber beer is an accredited regional product.

If your taste veers towards the sweet, you can tuck into speculaas, peperkoek (a ginger cake) or a mattentaart from Geraardsbergen – a sweet pastry made with cheese curd.

For something a little bit more robust, go for a local jenever – the historic precursor of gin. It comes in two varieties – young and old – and either will pack a punch.

Ghent itself is a foodie paradise and caters especially well for vegetarians. Would you like to savour the typical taste of Ghent? Buy a bag of traditional cuberdon ‘nose’ sweets or a jar of zesty Tierenteyn mustard. Cheese lovers will enjoy a Pas de Bleu, a blue-veined cheese crafted by the Hinkelspel dairy, or one of many other regional goat’s and sheep’s cheeses. The Het Groot Vleeshuis, the ancient meat hall located in the centre of Ghent, is the perfect market in which to pick up your local picnic.

In 1997 Pierre and Vinciane Delcoigne purchased Irchonwelz, a 12th-century castle, with the inten...
Read More
GET LATEST BEER NEWS