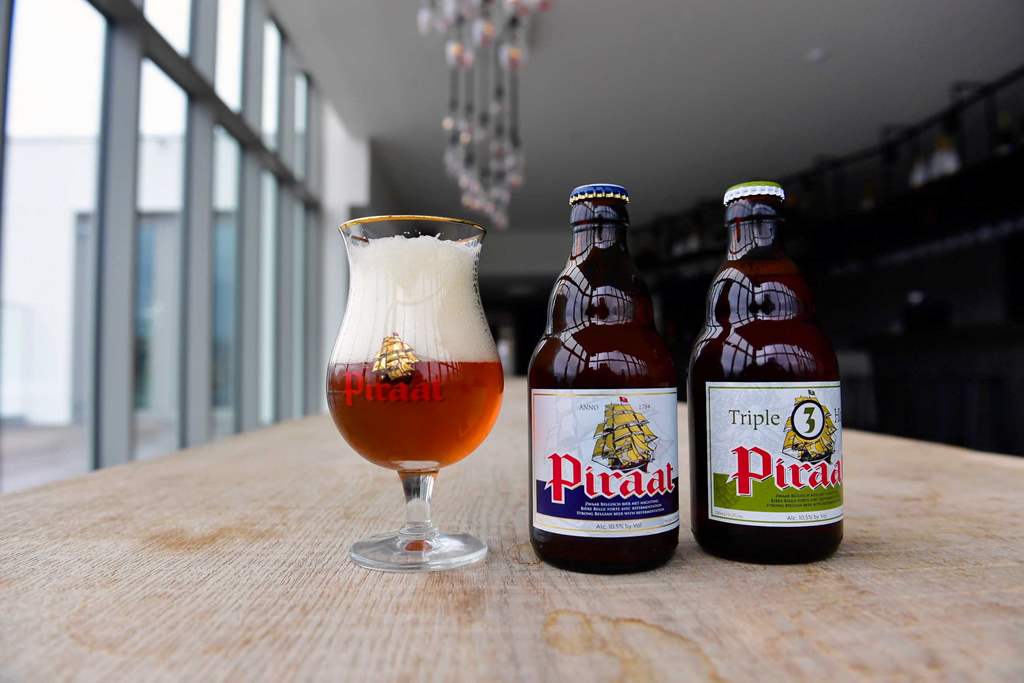 Brouwerij Van Ertvelde was founded in 1874 when Jean Baptiste De Bruin started up De Peer (The Pear) brewery in Ervelde near Ghent. After the founder’s passing, his widow Angelina Petronella Schelfaut carried on brewing, succeeded by her nephew Jozef Schelfaut.

After the First World War the brewery passed into the hands of Jozef’s son-in-law, Paul Van Steenberge, the husband of Jozef’s daughter Margriet.

Paul was Professor of Microbiology at Ghent Brewery College and brought his scientific knowledge to the brewery.

In 1919, De Peer Brewery was re-baptised Bios, taking the name of the beer brewed there. Paul successfully launched beers such as Bios Vlaamse Bourgogne (an oud bruin) and Leutebock.

He invested in a brewing hall and beer tanks and made the switch from wooden barrels to glass bottles.

The businessman in Paul overcame the brewer when the Second World War threatened the future of many breweries. Paul wanted to join a co-operative. Margriet, who inherited the brewery from her father Jozef, refused point blank, setting great store by the company’s independence. Then, in 1962, Margriet’s son, Jozef Van Steenberge, took over management of the brewery.

Jozef’s focus was on top-fermented beers. He closed down the in-house maltings and gradually reduced hop production.

In 1978, the brewery acquired the recipe of the traditional abbey beer of the St. Augustine’s Abbey in Ghent.

Four years later, Augustijn was introduced to the market, followed by Piraat and Gulden Draak. Sometimes, coincidence lends a helping hand to the brewer. The Gulden Draak started life as a one-off brew commissioned by the mayor of Evergem. When some Italian guests tried the beer they liked it so much that they insisted it become part of the regular range.

Ditto for the Gulden Draak Quadrupel 9000, born from a fortuitous mishap when the brewer forgot to add caramel malt to a recipe.

This beer hit the spot straight away, riding the trend for the rich and complex tastes of top-fermented speciality beers that started to grow after 2000.

In 1990, Jozef’s son Paul Van Steenberge took over the reins.

A new, entirely computerised brewing hall and barrel line were installed alongside an in-house water recycling facility and a new bottling plant and the power supply was switched to natural gas.

1998 saw the arrival of Jef Versele, the nephew of Paul Van Steenberge. Jef is the seventh generation of the family to join the team. Thanks to his efforts, exports of top-fermented beers - mainly to the USA, the Netherlands and Italy - have increased to 60 percent of total volume. 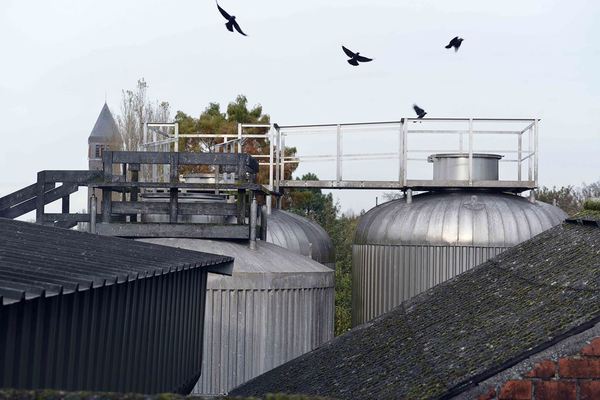 The top-fermented Van Steenberge beers re-ferment in the bottle, with yeast and sugar added at the bottling stage. The beer then spends two weeks in a warm chamber, at a temperature of around 20°C, to allow the yeast to do its work.

It has taken the efforts of no less than three generations of brewers to perfect this extremely complex brewing- and re-fermentation process. Two varieties of yeast are used for the re-fermentation: the first one is an active yeast that kick-starts the process; the second provides the typical rich taste.

As the beer ages, its aroma becomes more powerful and the taste and colour become more rounded.

Beer lovers have a choice between the young and fruity beer of the first three months after bottling, or the complex beer full of character that develops as the bottles are laid down for 18 months.

To enjoy both, just store the bottles at room temperature in your own home. The beer isn’t filtered during this process, so the yeast will remain at the bottom of the bottle, meaning that the way you pour the beer determines the taste and the clarity of the beer. Leave the yeast in the bottle and you will have a clear, mild beer.

Add the yeast to the glass and the beer becomes cloudy, gaining aroma and becoming bitterer. The re-fermentation process gives you a beer you can design yourself. 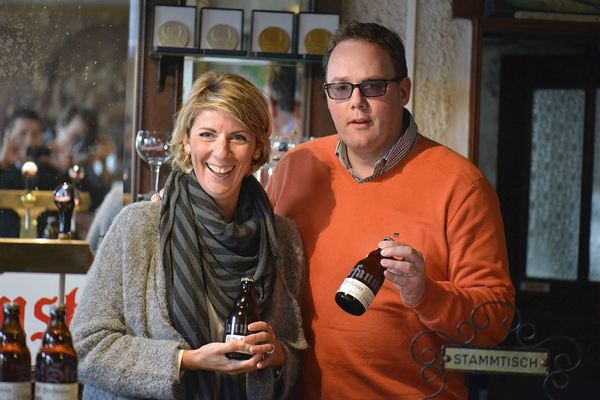 Since 2013 Jef Versele, son of Paul’s sister Greta, and his wife Theresa Deroose are in charge of the brewery. Both adhere to the traditional rules of brewing that the seven generations of their family have sworn by.

The ancient motto, ‘born a brewer, die a brewer’, still has a strong resonance, but to be a modern brewer takes more than a passion for brewing and a love of beer.

There are plenty of challenges to overcome. Brewers must make continuous investments to save water and energy costs.

They must also keep their eyes firmly on the market, picking and choosing where and when to expand their range. And style and design must be part of the skill set for the succesful modern beer. At Van Steenberge, the focus will be on the main brands: Augustijn (called St-Stefanus in South Africa and the UK, a co-operation with SAB Miller), Piraat and Gulden Draak.

Having said that, the brewer still wants to produce and offer a varied range of beers.

The future looks promising, but these brewers don’t have a crystal ball, unlike Jozef Van Steenberg who was a true visionary in his time.

However, their interest in IPA-style, well-hopped varieties of classics such as the Piraat shows that they are keeping abreast of international trends. 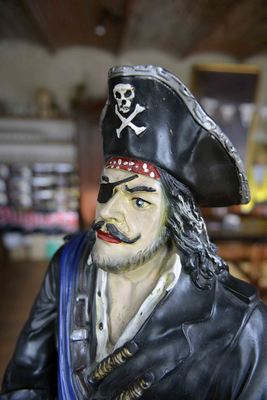 The Van Steenberge brewery sits in the centre of the village of Ertvelde. The impressive brewer’s mansion that faces the street, testifies immediately to the continuing importance of this brewing family within their community.

Visits start in the cosy brewery/café in the interior court, where the tours also return for to finish with a tasting session. The eyes are immediately taken by the splendid old bar. Vintage beer adverts line the walls and a pirate dominates the window.

Perhaps most striking though is the fresco opposite the bar, showing devils in all shapes and sizes. In its day, this art work may have been produced for educational purposes.

The tour offers a complete overview of the brewing process. Step-by-step, visitors are given an insight - the supply of the raw ingredients, the hops and the malts, leads to the production of the mash in the mash basin, then filtering, maturation, bottling, barreling and storage.

This historic brewery is undergoing a gradual but thorough face lift to allow it to respond to growing demand in a sustainable way. There will always be a fascinating contrast between the old and the new at Van Steenberge. Visit the café and you are steeped in the past. Visit the brewing hall and the new high-tech brewing kettles herald the future. 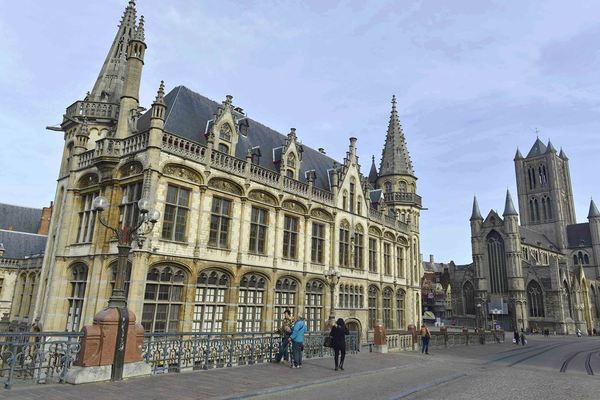 Brouwerij Van Steenberge is close to one of the most authentically historic cities on earth, Ghent. Stand in front of the Belfort (the city’s belfry) and turn your gaze upwards and you will see the Golden Dragon shimmering in the sunshine at the top of the tower.

This is where the Van Steenberge brewery found the inspiration for its iconic beer.

Just around the corner two further treasures await you. The gothic Sint-Baafskathedraal (Cathedral of St. Bavo) is home to the triptych showing the adoration of the Lamb of God, painted by the Van Eyck brothers.

The 13th-century Church of Saint Nicholas, with its guild chapels, also dominates the skyline and the Middle Ages are only ever around the corner in Ghent.

From the Sint-Michielsbrug (St. Michael’s Bridge) you can, in one single glance, take in a cathedral, a church and the Belfort tower.

Looking down from the same bridge, you can see the medieval harbor that unloaded its goods onto the Graslei and the Korenlei. This area is now choc-a-bloc with boutiques, cosy eateries and cafés with outdoor terraces. No visit to Ghent not complete without a trip to the medieval Gravensteen castle.

Just opposite you will find the picturesque Patershol quarter, built around a former abbey.

As in Bruges, water is everywhere in Ghent - stroll on the river banks or take to the water for a boat trip.

If you want an overview of ancient and modern Belgian art head for the Museum of Fine Arts and the SMAK Museum of Contemporary Arts located in the same area. Ghent’s history comes alive in the STAM city museum. If live music is your thing, try the Vooruit cultural centre for a wide choice of concerts.

Ghent is on a perfect scale for walkers and cyclists. You are better off leaving your car behind. You can always find the city by bicycle by following the banks of the River Scheldt. 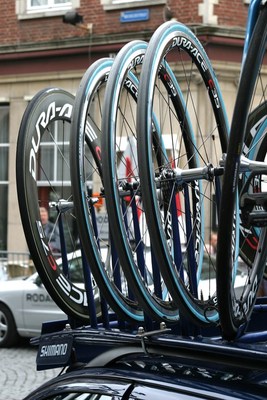 From Ghent: Ertvelde is 25km away using the R4 Eeklo to Zelzate road. The distance from Brussels is 75km. Use the E40 Brussels to Ostend road followed by the R4. By bus: take routes 3 or 52 departing from Gent-St-Jacobs.

Ertvelde is located in the heart of the 'Meetjesland' region to the north of Ghent. This is a paradise for cyclists and walkers with its nature reserves, recreational areas and picturesque villages.

The 'Hoge Walwandelroute' (11 km) starts off from Ertvelde, taking in the remains of the medieval 'Mottekasteel' (moated castle) De Hoge Wal (1199) and the birthplace of Ghent’s local hero, Jacob Van Artevelde, (1290-1345) who re-instated the wool trade with England.

Throughout the Meetjesland area you will find signposted cycling routes. On your bike you can discover enchanting nature reserves such as 'Kussende Kreek' (Kissing Creek), 'Molenkreek' and the leisure facilities at 'Boerenkreek'.

The route takes you through idyllic villages such as Boekhoute, Watervliet and Kaprijke and gives you plenty of chances to spot water birds in the reedlands. Design your own route using the bicycle GPS or the cycling node network and discover the charms of this green and flat land at your own pace. 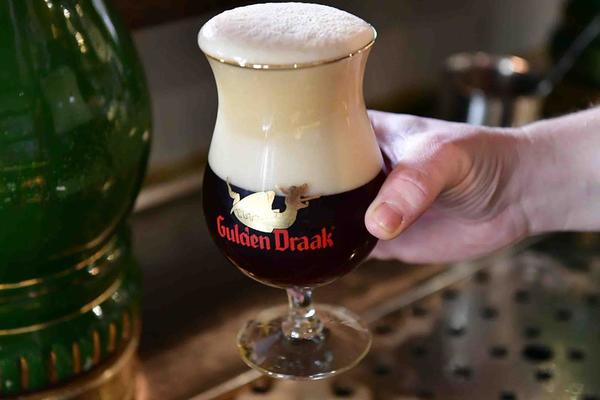 Fishing for eel has always been important in the 'Meetjesland region'. Just taste a tiny portion of smoked eel from Sint-Laureins and you will know why. If you are in search of fresh grey shrimp, you don’t have to go all the way to the coast. In the village of Boekhoute, on the Westerschelde River, you will find two fishing families still practising their trade.

The Meetjesland is an agricultural area, and wherever you go you’ll find plenty of opportunities to taste fresh ice cream, cheese or honey, all made on the farm.

In and around the city of Ghent you will come across the traditional smoked Flemish ham; 'droge ringworst' (a dried, round sausage) from Meetjesland; unpasteurised goat’s cheese, blue-veined cheese – highly recommended paired with a Gulden Draak – as well as the zesty mustard from the legendary Tierenteyn, a haven for nostalgics.

If you have a sweet tooth, you are in paradise. The choice is abundant: 'Gentse neuzekens' or 'cuberdon' fruit gum sweets, babelutten, kriekspekken, wafer-thin Gentse kletskoppen, makrons (almond biscuits) and Gentse mokken (biscuits made of aniseed). If you have an interest in regional products and want to find out more, pay a visit to the Centrum voor Streekproducten (Centre for Regional Products) located in 'het Groot Vleeshuis'.