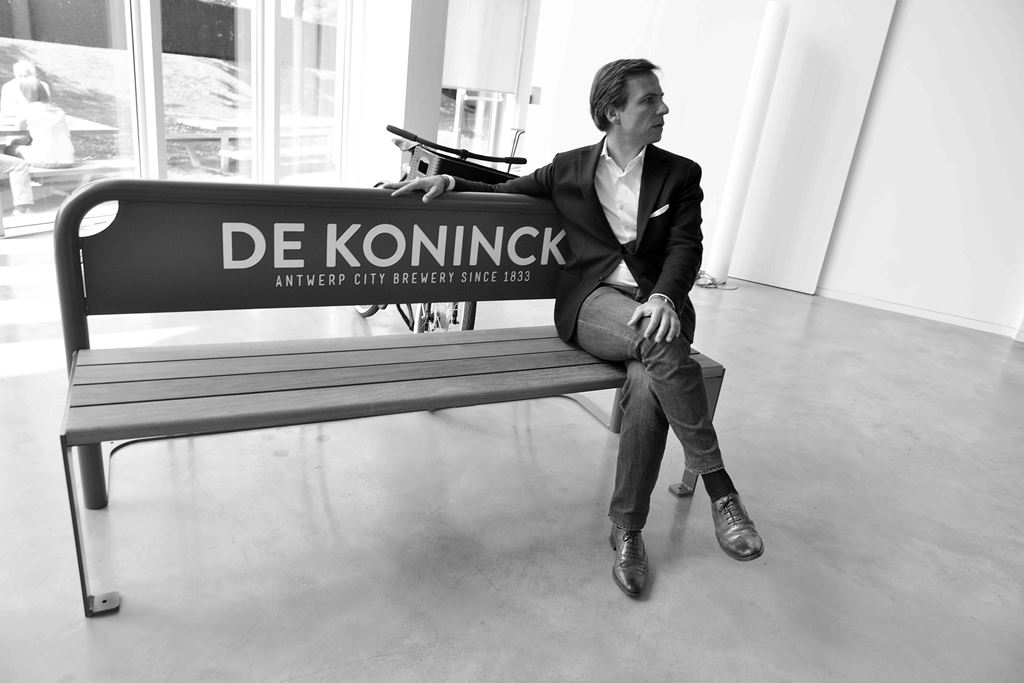 Duvel Moortgat is the owner of two American breweries: the Ommegang brewery in Cooperstown (New York) and the Boulevard Brewery in Kansas City (Kansas). Michel is therefore well placed to make a comparison between American and Belgian brewing cultures.

“The Americans are launching many new beers in quick succession”, Michel explains. “It is a very dynamic beer culture where plenty is happening. Many brewers introduce seasonal beers, limited editions, special brews and so on. All this serves as a great source of inspiration for us. We are firm believers in cross-fertilisation.

Twenty years ago the Americans came to us for ideas but nowadays there is a real exchange. We are enjoying great respect thanks to our scientific and technical expertise, just look at our knowledge of fermentation for example. The Americans are playing a different trump card. They are using ingredients that are completely different, local aroma hops for instance, that often result in very surprising beers”. 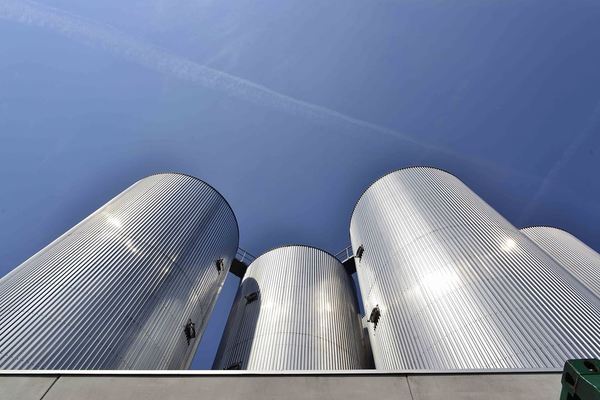 Michel Moortgat expects that some of his Belgian beers will eventually also be brewed in the United States. This will not include Duvel as this particular beer requires very specific conditions. In terms of other beers, “We will adhere to the original recipe and brewing process and we may import a number of ingredients”, the brewer assures us.

“There is a Belgian brewer, Steven Pauwels, who works for Boulevard Brewery. He is familiar with all of the Belgian beer styles. And so we are confident that our beers will be produced in the right way over there”.

In the meantime, American influences are trickling through and reaching the Belgian beer market. Michel is showing us the Bourbon Barrel Quad made by Boulevard Brewery, stored in bourbon barrels; the Season Brett, an American saison using wild yeasts and the Chocolate Ale, developed in collaboration with an American chocolatier.

“Really, the Americans have introduced the ‘barrel aged’ beers, if you disregard our sour beers”, Michel tells us. “They are excellent brewers of light beers with plenty of taste, a trend that has a great future”. They are also very adept at marketing. The label of the Pop-up IPA shows a small camper van. The Double-Wide IPA displays a giant caravan, or RUV, commonly seen on US roads. The size of the trailer gives an indication as to the bitterness of the beer.

Duvel-Moortgat is not attempting to conquer the US market. Their sights are set much broader. They also own the Bernard brewery in the Czech Republic.

Over there, the brewers found inspiration in the Belgian fruit beers to produce their own brew based on plums.

These influences will trickle through to Belgian beers sooner or later. Just bear in mind the Duvel Tripel Hop, the one that changes one of the three hops used every year, giving a new and different taste every single year. Or the Chateau d'Ychouffe, made by Brasserie d’Achouffe, veering between beer and wine. 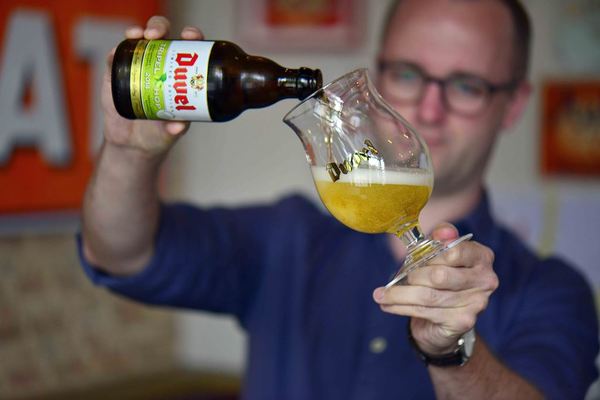 Gastronomy and beer used to be worlds apart. But changes are afoot. “Beer has now undergone a long overdue revaluation”, is Michel Moortgat’s opinion. “Restaurants used to view beer purely as a thirst-quencher. Things are quite different now. Chefs are discovering beer and the wide range of tastes it offers. There is an increasing awareness that there is far more to discover above and beyond mussels and pils or a stew made with Trappist beer.

Our palate can discern four basic tastes: sweet, salt, sour and bitter. With wine you get two of these: sweet and sour. Beer adds the further dimension of bitter. Also, beer cleanses your palate thanks to its sparkling quality. Last but not least, it makes for an excellent thirst-quencher”.

The brewer feels that beer and wine both have their place at the table, perhaps even side-to-side. Having said all that, the trend towards food pairing enhances the image of beer and contributes to its recognition as a high-quality gastronomic product.

Duvel Moortgat is happy to set the trend in this respect. For example, the brewery employs a beer sommelier (Nicolas Soenen). He is in charge of organising tastings and also conducts training in food pairing. The result? The tide is turning, albeit slowly. The proof is that you will now find Duvel Moortgat beers on the menu of some high-ranking restaurants. 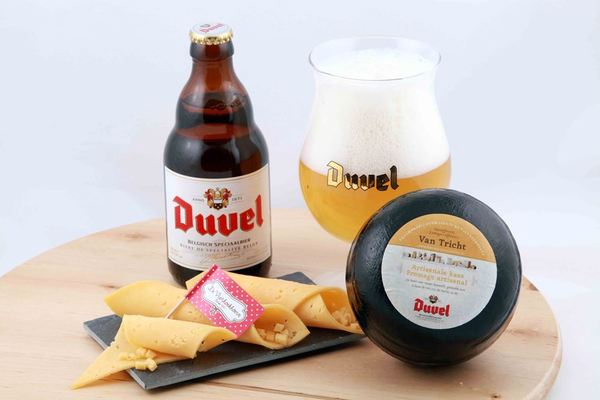 Food and beer pairing is all about experiencing flavours. The brewery is taking this quite a bit further on the site of its own De Koninck brewery in Antwerp. Having taken over this brewery, Duvel-Moortgat has made some substantial investments in the quality of the beers.

This Antwerp classic is still brewed on the familiar site in the city but it is now being bottled elsewhere by Duvel Moortgat. The previous bottling plant has now been taken over by the renowned cheese affineur Michel Van Tricht. This is where his range of top cheeses is maturing, enjoying the best conditions possible, in eight high-tech cooling chambers. This is how this cheese affineur safeguards the ‘fine fleur’ of his cheeses that are delivered to top-ranking restaurants.

A number of years ago, Van Tricht discovered the advantages of the cheese-beer pairing and he has been a fervent ambassador ever since. At the De Koninck brewery, he is not ‘far from the source’.

“Space was available on the old De Koninck site in the heart of the city”, Michel tells us. “We are now using the facilities to establish a beer experience centre where you can discover the history of De Koninck, and of beer in general, in an interactive and playful way. And, last but not least, you can taste our beers”. 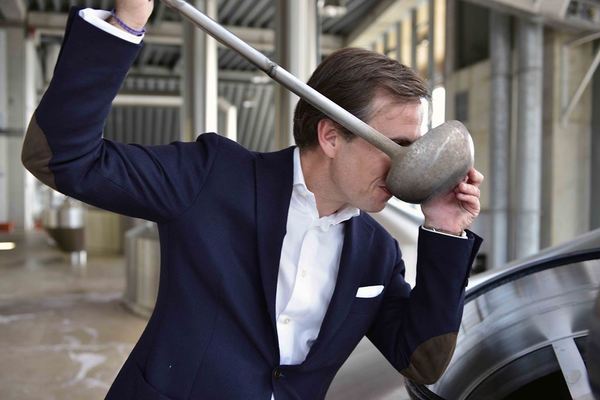 The project has grown in the planning. Aside from the cheese deli, you will find the 'Velodrome' cycle store that has found a home in one of the former brewery buildings. This is where many cycling trips start and finish. You can also have your bike repaired here or purchase a new, quality one. All part of the trend for city cycling.

The brewery site is also planning to give space to traditionally made food. An artisan baker will bake bread on-site, a chocolatier will display his craft.

There will be a coffee merchant roasting and grinding his wares and a qualified butcher preparing and maturing his meat in the traditional way... leading, eventually, to an entire “Avenue of Taste”.

Beer will also play a major role, how could it not? The entirely renovated brewery site will re-open in the spring of 2015. Our verbal encounter has now come to an end. Michel feels that an announcement is appropriate to conclude the interview.

“This autumn we will be introducing a new De Koninck beer!” As for me, I can’t wait to see the new world that may land in my glass.