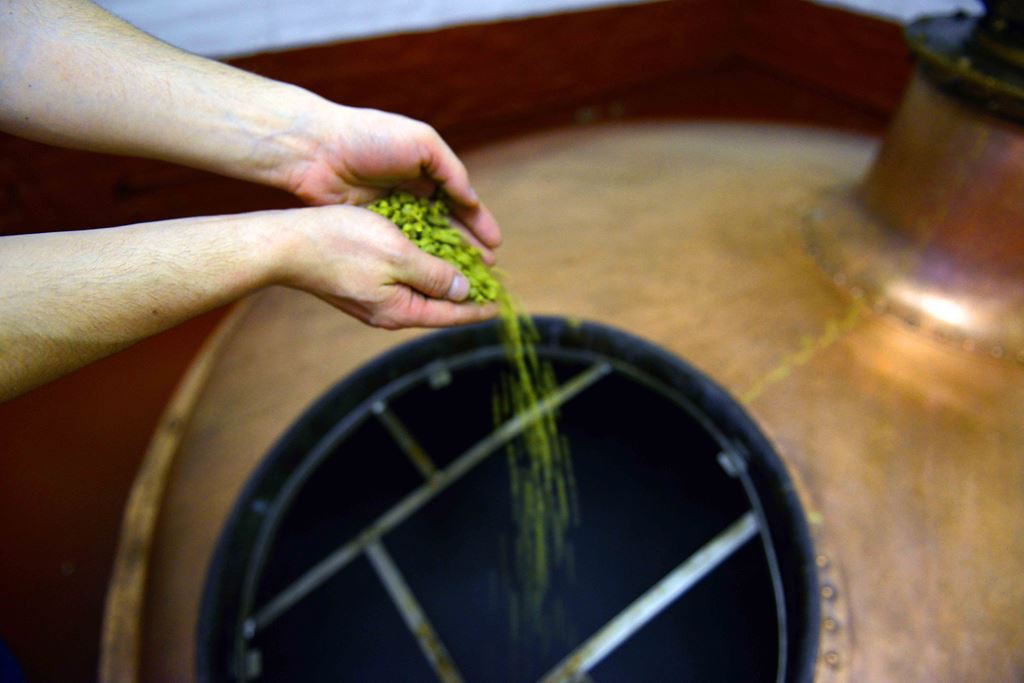 PAJOTTENLAND - Lambic (lambiek) is one of the oldest beer styles in Belgium. It is a spontaneously fermented beer, a so-called flat beer, coppery blonde to amber in colour, with an alcohol content by volume of 4.5% to 6%, brewed using barley, wheat and hops.

In 1420 Jan IV, the Duke of Brabant, issued a decree stating that a higher proportion of wheat was required to improve the quality of lambic.

In modern times, the minimum proportion of wheat is 30% and the majority of artisan lambic brewers will work with a wheat percentage of up to 35%.

Three conditions are imposed on the hops used. They must be two to three years old. Only female cones should be used, to avoid bitterness in the beer.

And there should be five grams per litre so the beer keeps for longer.

During brewing the wort is boiled for between two and five hours before spending the entire night in an open cooling basin.

This is when the ambient wild yeasts are allowed to permeate the wort. Brettanomyces Bruxellensis and Brettanomyces Lambicus are the most common species of wild yeast involved; they are responsible for the specific taste of lambic and are not killed by alcohol.

These yeasts proliferate in the valley of the Zenne, situated to the West of Brussels, where you will find a number of artisan lambic brewers including Boon, Cantillon, Lindemans, Timmermans, De Troch, Girardin and 3 Fonteinen.

Several lambic breweries, including Belle-Vue and Mort Subite strive for maximum control of the brewing process by carrying out the cooling and fermentation process in closed tanks, albeit with a sufficient quantity of oxygen.

The cooled down beer is pumped into wooden (usually oak) barrels, sometimes called pipes, containing 600 litres, or it may be transferred to great foeders that hold 3,000 litres or more, where it will continue to ferment for months or even years.

Traditionally lambic is brewed between the end of September and the end of April at a temperature below 20 degrees Celsius.

This environment ensures that the wild yeasts are present in the correct proportions. It is also used as the basis of kriek (cherry) lambic, kriek or other fruit beers and gueuze, a sparkling blend of young and mature lambic that re-ferments in the bottle. 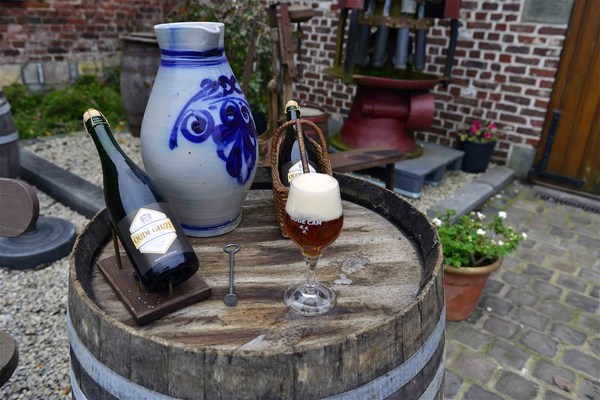 Lambic is not dissimilar to wine. It is a complex beer that you have to learn to appreciate. Pure lambic can be tart or sour. The best lambic has a mild flavour at first taste, gradually becoming more acidic with an exceptionally long finish.

Young lambic is pale yellow in colour with a red sheen. It is an assertive drink: slightly sour, not unlike cider, with a taste of apples - refreshing, dry and the perfect way to wake up an appetite.

A more mature lambic is a reddish-purple in colour, like red onions. It is milder than young lambic with a more rounded flavour and more complexity, with hints of fruit, a dash of Chablis and aromas of sherry.

A recent study into lambic breweries identified over 200 strains of wild yeast or other relevant bacteria used in making this beer.

Nevertheless, most breweries use only a few yeast varieties, sometimes even just one single one. Lambic undergoes at least five stages of fermentation that combine into a chain reaction and lead to the release of lactic acid and acetic acid.

A tasty, just-right lambic requires an investment in time, and each brewery creates its own unique micro culture. Fermentation and maturation are done on wood, with each barrel yielding a slightly different result: lemony touches, hints of grapefruit, flowery aromas or those of honey….

Quite often, a lambic will spend one to three years maturing on oak. Recycled whisky, cognac, port, calvados or Madeira barrels are sometimes used at this stage, adding their own flavours.

Vintage and limited edition lambic is usually destined for the export market.

Most of the traditional lambic breweries are found in the Valley of the Zenne to the West of Brussels.

However, the gueuze beer style has inspired brewers far beyond this region. As an example, Omer VanderGhinste in Bellegem and Castle Brewery Van Honsebrouck in Izegem brew lambic. Both breweries are at least one 100 kilometres away from the Valley of the Zenne. 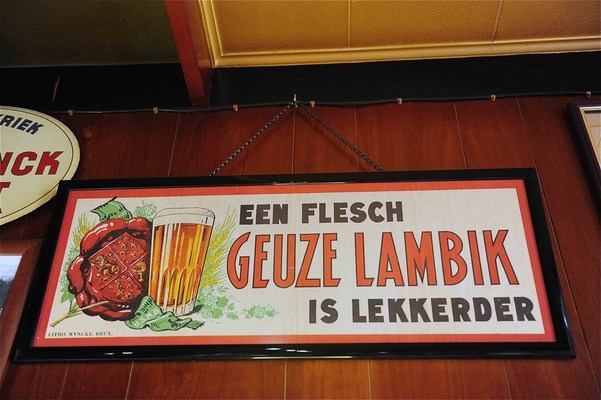 Gueuze - or Geuze using the Flemish spelling – is not brewed, but blended, or gestoken in Flemish. This lambic-based beer dates back to the 19th century, when a lambic brewer based in Geuzenstraat (rue des Gueux) in Brussels wanted to deliver some lambic to private clients but found himself bereft of barrel space.

Instead, he poured his beer into empty champagne bottles. He observed that the resulting beer had a higher clarity and had developed a frothy sparkle as a result of in-bottle re-fermentation.

A name was quickly found, based on where this beer style originated. Drinkers asked for gueuze lambic or gueuze for short. If you lived in the Zenne valley, you would use the term “bottle lambic”.

Plenty of experiments were conducted to improve this bottled lambic. Bottles were filled off with a blend of young and old lambic that would re-ferment in the bottle.

The young lambic prompted the fermentation and the old lambic determined the final taste.

A typical blend is made up of 60% young lambic (one year old), 30% two-year-old lambic, and 10% that is three years old. Gueuze beer is cloudy, its colour varying between matt gold and amber, and it pearlises in the glass.

Its flavour is tart and this beer is not low on alcohol, coming in at between 5% and 8% by volume. Interestingly, thanks to the in-bottle re-fermentation, gueuze has a very low sugar content – 0.2% - which makes it suitable for diabetics. 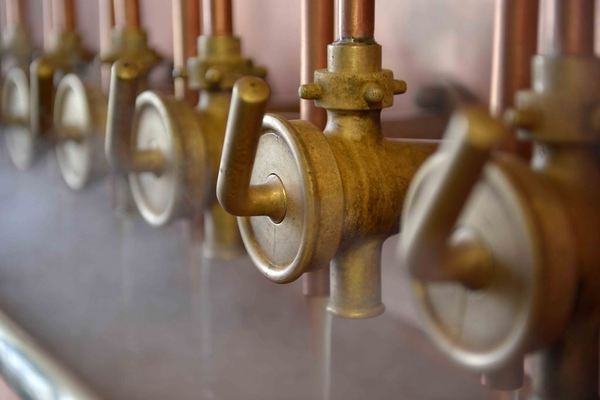 Gueuze is a great beer for to store, as the wild yeasts continue their work in the bottle until all residual sugars have been converted into alcohol and carbon dioxide.There are two types of gueuze makers. Lambic brewers are involved in the steken, or blending, of their own gueuzes.

You will also come across gueuzestekers, including De Cam, Oud Beersel, Hanssens and Tilquin, who buy wort of lambic, to ferment and age it in their own barrels in order to create their own final blends.

Several years ago the ‘Oude Gueuze’ label was accorded legal protection by the European Union. Brewers are now only allowed to call their product Oude Gueuze if the older lambic used in the process has been aged for three years, has matured in oak barrels and is free of any artificial sweeteners.

An artisan gueuze of this type may be recognised by its champagne-type bottle that must be topped by a cork and muselet, the wire cage that prevents the cork from flying out.

Gueuze is often sold in these champagne-type bottles, usually containing 37.5 or 75 centilitres. So why is this kind of bottle used for such a popular drink?

Both Champagne and gueuze ferment in the bottle releasing carbon dioxide and building up a pressure. When you open up a bottled gueuze, a pressure of up to six bars atmosphere? is released. A sturdy bottle is needed for the job. 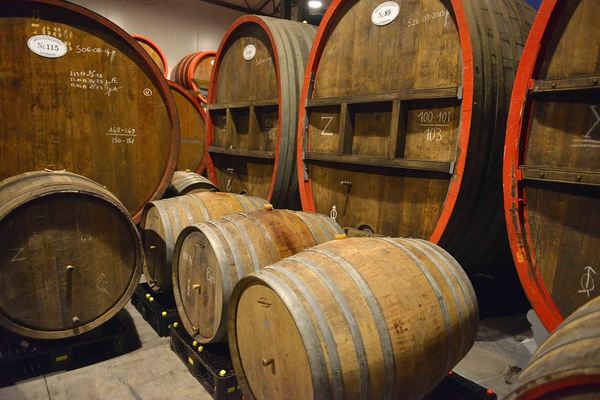 Like lambic, gueuze is a rather delicate product. Managing its spontaneous fermentation takes years of experience. Many factors have an impact on the end result: temperature, the maturation on wood, not forgetting the workings of the wild yeast…The proportions of old and young lambic varies between different gueuzes.

The general preference is for a ‘tender’ lambic, one that is not too sour. The more old lambic is added, the longer-lasting and deeper will be the aromas you will find in your glass.

A classic gueuze is likely to contain a small proportion of young lambic, typically only around 15%. A successful re-fermentation produces persistent air bubbles and lends liveliness to the brew.

A gueuze is dry, tart and either fruity or fragrant with roasted aromas.

After at least five consecutive, interacting in-barrel fermentation phases, the lambic beers will be ‘cut’ (blended) in three stages that allow them to continue their development.

This process is once again governed by four or five of the original yeasts and other micro flora, hence the complex character of this beer. True connoisseurs swear by a fully fermented Oude Gueuze. This brew is allowed to have a hint of cloud when served, with yeast deposits gathering at the bottom of the glass.

Both lambic and gueuze are veritable thirst quenchers. They serve as an aperitif to stimulate the appetite at all sorts of official functions.

Gueuze is served in a cone-shaped glass, with indents towards the bottom and a thick, sturdy base. If you find your gueuze just slightly on the sour side, you can add a sugar cube to be mashed up in the bottom of the glass using an iron device called a lambiekstoemper.

If you want to delve further into the rich world of lambic beers, the place to go is Visitor Centre De Lambiek in Alsemberg near Brussels. Here you can immerse yourself in the flavours, aromas and textures of these beers that are such an important feature of the Brussels region and the Valley of the Zenne.

It is the very best, really the only, starting point for a tour of the many local lambic breweries and gueuze blenders. Also keep an eye out for restaurants that cook with these beers or serve them on their own or with your meal. 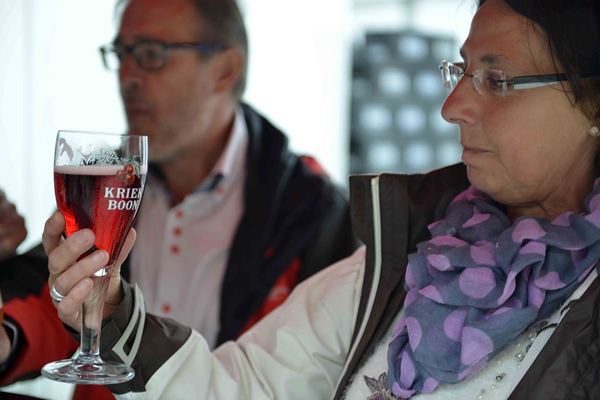