Brussels Beer Challenge 2017, the results are in! 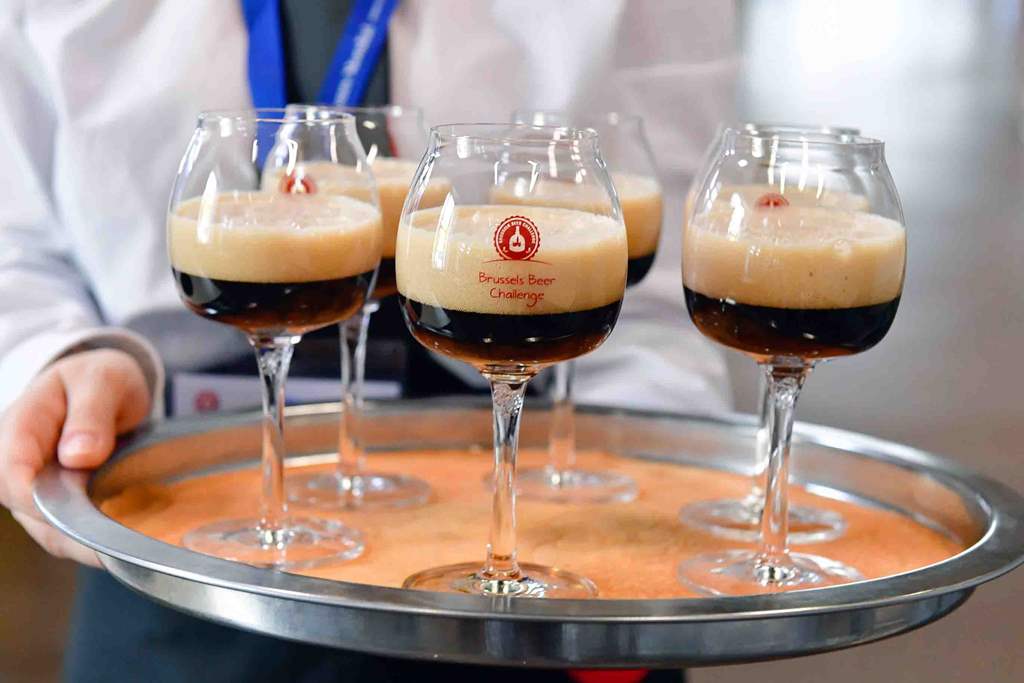 NAMUR - At the 6th edition of the Brussels Beer Challenge, hosted this year by the city of Namur, Belgium once again lived up to its cast-iron reputation as one of the most important beer countries in the world. “Belgium still reigns when it comes to classic Belgian styles including Abbey/Trappist Style Blond ales, Tripels, Strong Blonde ales, Saison, Flemish red-brown, Gueuze...,” Luc De Raedemaeker, the organiser, assures us. “Large as well as small family-owned breweries have scooped awards.”

With 58 entries, the classic Belgian Tripel remains immensely popular. IPAs from all corners of the globe were also strongly represented and so were wood-matured beers, 60 of which were submitted for judging. The new kid on the block is Italian Grape Ale; the missing link between beer and wine.

No fewer than 85 internationally renowned beer connoisseurs spent three days tasting 1,512 beers from 37 countries. Around one fifth of the beers originated in Belgium whereas the USA accounted for one sixth. Other participating countries included Germany, the Netherlands, France, Hungary and Italy in the company of more exotic beer countries such as Japan, Chile and Brazil. All of the beers submitted to the contest were divided into categories based on origin, typical characteristics and style. Blind tasting sessions were held to allow the jury to carefully ponder the fates of all the entrants. At the end of the three tasting days the best beers in each category were given a gold, silver or bronze award or a Certificate of Excellence. 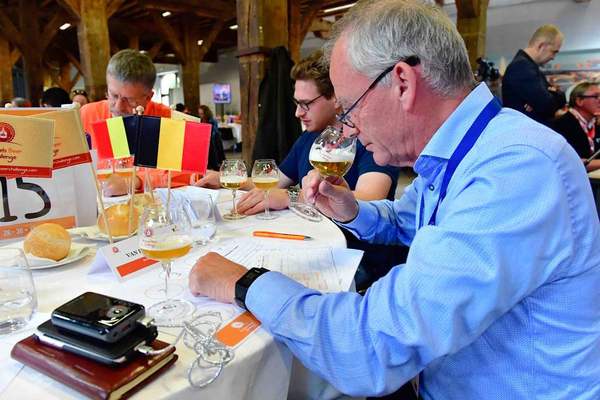 Not only did Belgian brewers and beer firms put in a strong performance in their own traditional beer styles, they also scored well when it came to innovative brews. Belgium topped the rankings for blonde abbey beers with a gold for Troubadour Blond (The Musketeers), a silver for Affligem Blond (Alken-Maes), a bronze for Leffe Blond (AB Inbev) plus a Certificate of Excellence (COE) for Brugse Zot Blond (De Halve Maan).

Lupulus Brune (Lupulus) gained a COE in the Abbey/Trappist Style Dubbel category. Palm Belgian Craft Brewers once again demonstrated its mastery of the craft in the Amber Ale category. Its Palm scooped the gold. The bronze also went to Belgium for La Roublarde from Brasserie du Renard. Haacht was awarded a silver for its Super 8 IPA, brewed in the English IPA style, whereas the Pirlot brewery achieved a bronze with its Kempisch Vuur Hoppergod, a Belgian style IPA. Mobius Dry Hopping (Mobius) gained a COE for its American IPA (> 6.5% ABV).

When it comes to Tripels (Belgian Style), no other countries can reach the heights achieved by Belgium. The Belgians swept the board with a gold for Rangsken (Den Houten Molen) and a silver for La Guillotine (Huyghe). The bronze was shared by Tripel Kanunnik (Wilderen) and Triple d’Anvers (De Koninck) and a COE went to St Feuillien Triple (St Feuillien). Waterloo Récolte (Waterloo) is a relatively new beer but it managed to take away the gold for its Traditional Saison. The Double Saison was another triumph for Belgium and especially for Brasserie Dupont, cementing its reputation with a gold for Bons Voeux and a bronze for Moinette Bio as well as a COE for the Double Saison Triple Hop made by Abbaye de St Ghislain. One of the best bitters amongst the pale and amber ales is Aubel Pure (Grain d’Orge), which came away with a bronze.

Houppe (Brasserie Artisanale de Namur) was awarded a silver in the Bitter Blond/Golden Ale division. And when it comes to Light Bitter Blond/Golden Ales, Belgium once again put in a convincing performance. The gold went to Grandgousier (Brasserie de la Lienne) and the silver went to Korus (Les Fleurs du Malt). The Val Dieu Cuvée 800 ans (Val-Dieu) was rewarded with a COE. In the field of Strong Blonde/Golden Ales, Belgium once again made a clean sweep. Gold for Hapkin (Alken-Maes), silver for St Feuillien Grand Cru (St Feuillien) and bronze for Deugniet (Brasserie du Bocq). 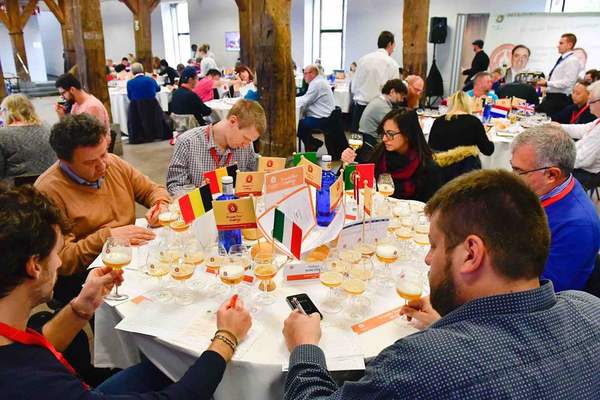 Jupiler (AB Inbev) scooped a COE in the International Style Pilsner category. Belgium also had strong contenders in the German ‘Helles’ lager style. Haacht was awarded silver for its Primus whereas Palm’s Estaminet came away with a COE.

Lienne Noire dry stout, brewed by Brasserie de la Lienne, came second in its category whereas Kempisch Vuur Haverstout (Pirlot) did one better: its Oatmeal Stout was crowned with a gold. De Brabandere’s Brewmaster Selection Wild Funky Wit was awarded with a silver in the German ‘Gose’ wheat beer style. Belgian ‘witbier’ also dominated its class; no less than a gold for Blanche de Namur (du Bocq), a silver for Hoegaarden and a COE for St Bernardus Wit. Amongst the stronger DubbelWit/ Imperial White beers, Wipers Times 14 (De Kazematten) was awarded with a bronze.

Zeven Zonden Invidia (Hugel) gained a bronze in the category of chocolate-flavoured beers. Amongst the Old Style Fruit Lambics, Timmermans Oude Kriek took away the gold. The silver went to Schaarbeekse Oude Kriek (Oud Beersel). Tilquin deserves a special mention as it was pronounced the ‘European revelation’ for its Oude Gueuze Tilquin in the Speciality Beer division: Old Style Gueuze-Lambic. Belgium was predominant in this category. Oud Beersel scooped two silvers with its Oude Gueuze Beersel and Oude Gueuze Vandervelden 135 and, to top it all off, Gueuze Boon Mariage Parfait (Boon) was awarded a COE. Oud Beersel scooped a silver with their BZART lambiek in the ‘Brut Beer’ category.

Moving on to the Other Sour Ales (specialty beer) category, the new GingerGueuze made by Lindemans is now tinged with gold. Petrus Aged Pale (De Brabandere) is good for a silver and Cazeau Sour Session I (Brasserie de Cazeau) deserved its COE. In the category of Flavoured (Fruit) Beers, the gold was awarded to Liefmans Kriek Brut with Wilderen kriek scooping a bronze. Newcomer Kompel won a gold award for its Bellefleurs flavoured (honey) beer and Piccolo (De Circus Brouwerij) was awarded a silver for its beer flavoured with herbs and spices (> 6% ABV). Winter Bie (De Bie) was pronounced the best winter ale with Waterloo Récolte Hiver scooping a bronze in the same category. Finally, Rebelse Strop (Roman) won the award for the best light specialty beer (< 7% ABV).

Here is an overview of all the 2017 results or for more information on the event visit the official Brussels Beer Challenge website. 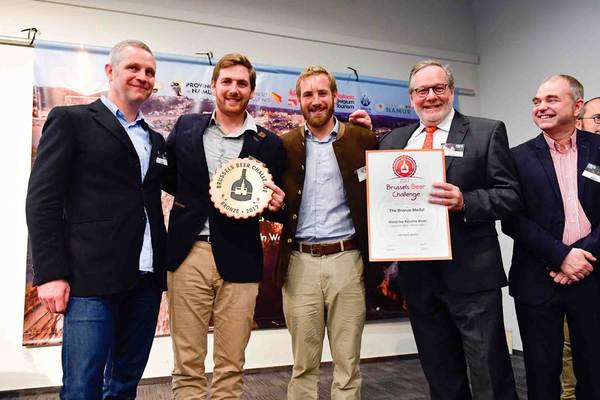 LEUVEN - 12,500 fans made their way to Leuven for what was already the 15th edition of the Zythos...
Read More
GET LATEST BEER NEWS